These 50 Photos From The Past Are Shocking And Hilarious. I Can't Believe How Things Have Changed... These photographers may have never known the significance of the pictures they took and that millions would be marveling at them in the future. 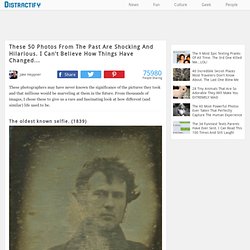 From thousands of images, I chose these to give us a rare and fascinating look at how different (and similar) life used to be. hyperallergic.com Robert Cornelius took this photo outside the store his family owned. It became famous for being the first self portrait or as its commonly now known, a "selfie. " The Oxford Astrologer: Monthly Horoscopes. 29 April Solar Eclipse 8° Taurus There is Jesus, 33 years old, on the cross, representing the whole of suffering humanity. 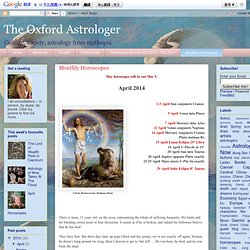 Salvador Dalí’s Sinister and Sensual Paintings for Dante’s Divine Comedy. By Maria Popova From Heaven to Hell in melting faces and flying bones. 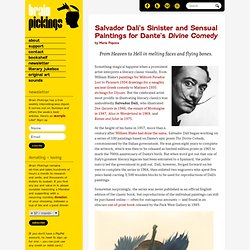 Something magical happens when a prominent artist interprets a literary classic visually, from William Blake’s paintings for Milton’s Paradise Lost to Picasso’s 1934 drawings for a naughty ancient Greek comedy to Matisse’s 1935 etchings for Ulysses. But the celebrated artist most prolific in illustrating literary classics was undoubtedly Salvador Dalí, who illustrated Don Quixote in 1946, the essays of Montaigne in 1947, Alice in Wonderland in 1969, and Romeo and Juliet in 1975. ZuSanLi Tačka dugovečnosti ili tačka od stotinu bolesti na vašem telu. Sagittarius Horoscope 2014 Darkstar Astrology. 2014 starts slow and sedately for Sagittarius. 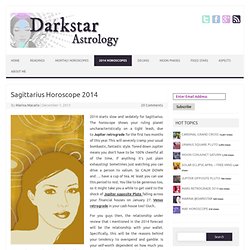 The horoscope shows your ruling planet uncharacteristically on a tight leash, due to Jupiter retrograde for the first two months of this year. This will severely cramp your usual bombastic, fantastic style. Star Lore of the Constellations - Sagittarius the Archer. The figure of Sagittarius, the Archer, is often confused with Centaurus, the Southern Centaur, which lies close by on the other side of Scorpio. 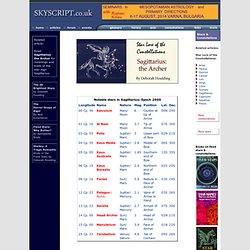 Sagittarius is invariably shown facing westwards, with his arrow pointing towards the Scorpion, and generally depicted with a cloak flying behind him and the Southern Crown at his knee. Classical legend claims that the Greek Centaur Chiron placed Sagittarius in the heavens to guide the Argonauts in their expedition through Colchis. Mid Zap Zone. So we’re basically in the middle of the Zap Zone that is Uranus square Pluto and you know, whatever is going on (love, art, individuation, psych dev) is intense. 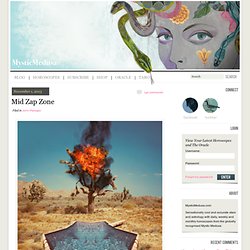 And obviously the whole economy is going through the massive Pluto in Capricorn transit with extra amphetamine from Uranus in Aries. BUT let’s take the fourth exact Z.Z. hit today as a cue to assess the terrain – where are you at? Mercury Retrograde October 2013 ~ Balancing The Scales. Mercury goes retrograde February 6 2014 and the traditional advice is “Don’t travel, Don’t sign contracts. 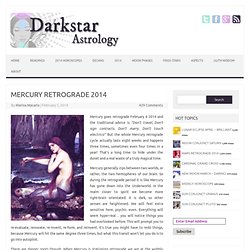 Don’t marry. The Cardinal Cross Years. Published in The Mountain Astrologer June/July 2008 as “Astrology in Troubled Times” Astrology as Spiritual Constant Troubled times have always been astrology’s stock in trade. 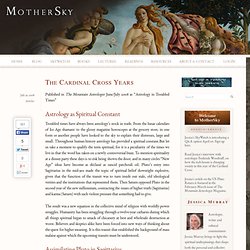 From the lunar calendars of Ice Age shamans1 to the glossy magazine horoscopes at the grocery store, in one form or another people have looked to the sky to explain their distresses, large and small. Throughout human history astrology has provided a spiritual constant.But let us take a moment to qualify the term spiritual, for it is a peculiarity of the times we live in that the word has taken on a newly controversial buzz. To mention spirituality at a dinner party these days is to risk being shown the door; and in many circles “New Age” ideas have become as déclassé as rancid patchouli oil. 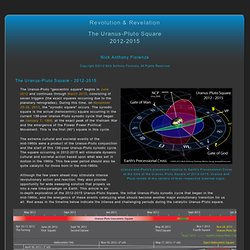 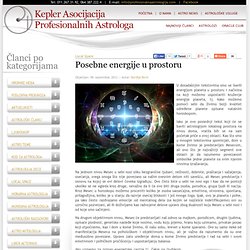 Saturn, Venus and The Dragon’s Head. « TMA This Week article list By Melanie Reinhart | September 23, 2013 A warm hello to TMA readers, and grateful thanks to Mary Plumb for offering me the opportunity to write a piece for this blog … Currently, there is a triple conjunction of Saturn, Venus, and the North Node in Scorpio, and as you may already be aware, relationship themes are in the astrological view-finder! (Saturn-Node is exact on September 25, 2013 at 12:58 p.m. GMT, in 9°25′ Scorpio.) The Uranus-Pluto Squares: Serving the Needs of an Epoch. « TMA This Week article list By Gary P. Caton | September 16, 2013. The Square Dance of Change: Uranus Square Pluto 2012-2015. The Square Dance of Change Monday, April 21, 2014 at 12:20pm PDT / 19:20 UTUranus direct at 13° 34' Aries, Pluto stationary retrograde at 13° 34' Capricorn.

Merriman Market Analyst - URANUS SQUARE PLUTO: 2012-2015. Checking In On The Uranus Pluto Square. There is a cosmic tone happening right now, and it will continue through 2015. Many people are questioning whether their life as it is, is truly sustainable. Individual circumstances vary but the feelings of unhappiness, despair are common and at core there is a deep inner knowing that what we have been doing for the last XX years is not supporting the future person we want to become. This is not only true for some of us individually, but as we are seeing, it is true for us collectively as a whole.

Systems in our government are broken, false starts leading to perpetual impasse. The Surprise Engine:The November Uranus/Pluto Square With A Yod. Art by. Eclipses: Tables.