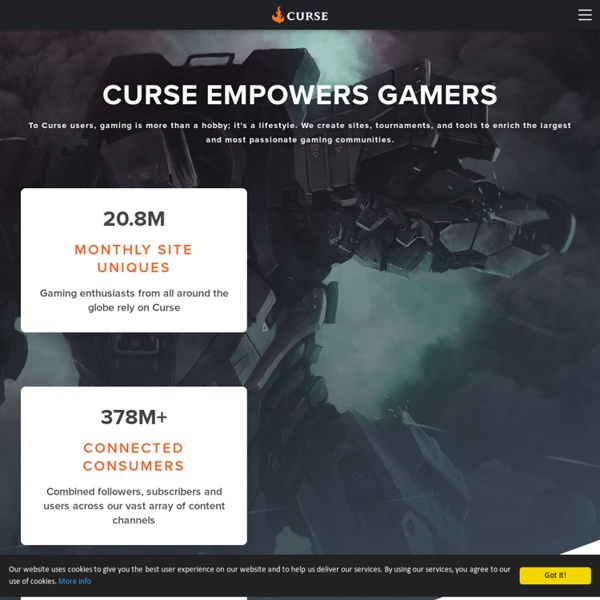 Signature Wow - Générateur automatique de signatures World of Warcraft. sc4modds SimCity 4 is a city-building and urban planning computer game released in 2003, suceeded by the Rush Hour expansion pack and the eventual Deluxe Edition. The name SimCity carries a heavy amount of nostalgia for a lot computer gamers and for many, SC4 was and still is the best city builder out there. The fact that it is still played today is proof of the game's success and awesomeness. Its staying power, however, is entirely contributed to the modding community.

Minecraft Arena Junkies - World of Warcraft PvP Strategy and Discussion View topic - Steam Achievements Hello All!Saved games from the old version should still work with Steam version. If this is not the case, please send such saves to me at rudankort@rsdn.ru and I'll investigate.About the mods, they should work with Steam version. Thus, I've heard from Nico that his Legacy of Versallies mod worked with it."Difficulty Colonel or higher" includes custom difficulties too. Colonel is a default difficulty, all sliders are in "neutral" state (no prestige/experience/strength/turn count modifiers).

Home The Last Days (of The Third Age of Middle Earth) mod for Mount & Blade by TLD-team on Oct 31st, 2011 The Last Days Of The Third Age Of Middle Earth Mod, for Mount&Blade 1.011 (now also for Warband!) Over 2,000,000 downloads on our various mirrors so far! TLD now works on Warband. Read the Manual to find out what to do! TLD 3.22 is now Open Source! The 50 best Skyrim mods The perfect mod list is a tricky business. There's no way to appeal equally to those who enjoy dressing like an anime character and those who like gritty realism. What we've tried to do is assemble something that largely sticks to the tone and setting of vanilla Skyrim, while improving and expanding it any way I can. I don't use all fifty of these mods myself (I'm not really into survival for example, so I don't use Frostfall) but the vast majority of them are part of my current install. Where there are a couple of competing mods I've tried to offer you the choice and explain the pros and cons of each one. Table of contents

The best Civilization V mods It's a Brave New World for Civilization V, and a brave new world for Civ V mods. We’ve gone through our and tested our collection from the Steam Workshop for 2014 compatibility and freshness, while at the same time adding new mods that caught our eye or won the community's favor. As with all mods, compatibility can depend on a lot of factors. Our setup includes both major expansions of Civ V—Gods and Kings as well as Brave New World.

The best total conversion mods ever Link: Nehrim site Every full-conversion mod comes with a high degree of ambition, but it’s a truly special situation when the mod’s creators have the talent to match. Nehrim: At Fate’s Edge, created by German modding team SureAI over four years, does what the best fullconversion mods do: reshapes the features that are lacking in the original game and provide hours of exciting new content. With original voice work by dozens of actors, big changes to several of the game’s familiar systems, and its own quests, story, lore, playable races and a massive and beautifully designed new map to explore, Nehrim transforms The Elder Scrolls IV: Oblivion into an entirely new experience.

Galactic Civilizations II My Abandonware: download old free games from the 80s and 90s I made a wallpaper celebrating all of the Civ games we know and love. [1920x1280]