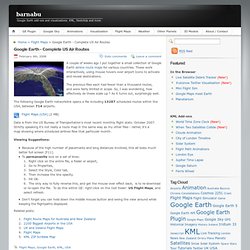 These work interactively, using mouse hovers over airport Icons to activate and reveal destinations. The previous files each had fewer than a thousand routes, and were fairly limited in scope. So, I was wondering, how effectively do these scale up ? As it turns out, surprisingly well. The following Google Earth networklink opens a file including 13287 scheduled routes within the USA, between 714 airports. Flight Maps (USA) (2 MB) Data is from the US Bureau of Transportation’s most recent monthly flight stats: October 2007. 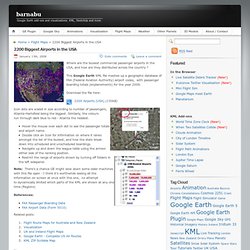 This Google Earth KML file mashes up a geographic database of FAA (Federal Aviation Authority) airport codes, with passenger boarding totals (enplanements) for the year 2006. Download the file here: Daylight Hours, Timeline. Home > Animations > Daylight Hours, Timeline This Google Earth time animation is a simplified visualization of the how number of daylight hours (insolation duration) varies according to latitude over one year. 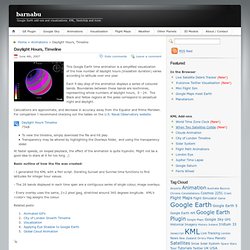 Each 5-day step of the animation displays a series of coloured bands. Boundaries between these bands are isochrones, representing whole numbers of daylight hours, 0 - 24. The Black and Yellow regions at the poles correspond to perpetual night and daylight. Calculations are approximate, and decrease in accuracy away from the Equator and Prime Meridian. Google Sky Constellation Boundaries. Home > Other Planets > Google Sky Constellation Boundaries In a recent post, OgleEarth mentioned the lack of constellation divisions in Google Sky’s default layers. 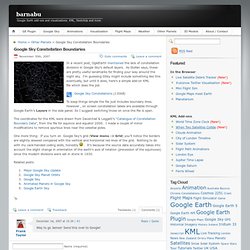 As Stefan says, these are pretty useful landmarks for finding your way around the night sky. I’m guessing GSky might include something like this eventually, but until it does, here’s a simple add-on KML file which does the job. Google Sky Constellations (130kB) To keep things simple the file just includes boundary lines. The coordinates for the KML were drawn from Davenhall & Leggett’s “Catalogue of Constellation Boundary Data”, from the file for equinox and equator 2000. One more thing: If you turn on Google Sky’s grid (View menu -> Grid) you’ll notice the borders are slightly skewed compared with the vertical and horizontal red lines of the grid. . Ferris Wheel Animation in Google Earth. Home > Animations > Ferris Wheel Animation in Google Earth This is a Google Earth Time Animation of the 110 year old Ferris wheel in Prater Park, Vienna - the Riesenrad. 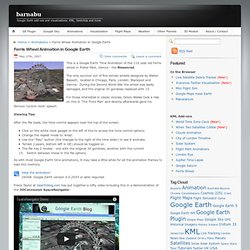 The only survivor out of five similar wheels designed by Walter Bassett, located in Chicago, Paris, London, Blackpool and Vienna. During the Second World War the wheel was badly damaged, and the original 30 gondolas replaced with 15. For those interested in classic movies, Orson Welles took a ride on this in ‘The Third Man’ and directly afterwards gave his famous ‘cuckoo clock’ speech. Viewing Tips After the file loads, the time control appears near the top of the screen. Click on the white clock gadget to the left of this to access the time control options.Change the repeat mode to ‘wrap’.Use the “Play” button (the triangle to the right of the time slider) to see it animate.Terrain (Layers, bottom left in GE) should be toggled on.The file has 2 modes - one with the original 30 gondolas, another with the current 15. Google Saturn? Google Earth 5, World Time Zone Clock - Javascript and KML. Home > Visualization > Google Earth 5, World Time Zone Clock - Javascript and KML World Time Zone Clock in Google Earth 5 Here’s a KML and Javascript(!) 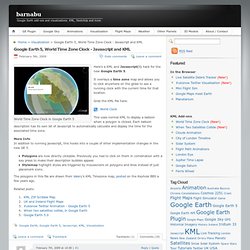 Historypin. Earth 6. 20 Great Free Google Earth Add-Ons - Gallery. In Pictures: The Strangest Sights in Google Earth - PCWorld. Tk Close More on Merrifield: Another look at Intel's new chip Feb 26, 2014 6:45 AM At Mobile World Congress, we got a chance to take a look at Merrifield to see if the new processors from Intel can give you better battery performance. 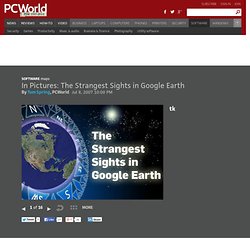 Google Sightseeing - Discover the world via Google Maps and Google Earth. GELessons.com. Smoke signals. Google Earth for Educators: 50 Exciting Ideas for the Classroom. March 14th, 2010 Google Earth has opened up potential for students in classrooms around the globe with its bird’s-eye view of the world. 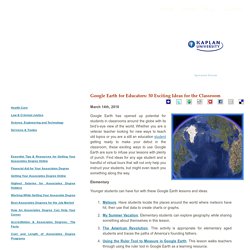 Whether you are a veteran teacher looking for new ways to teach old topics or you are a still an education student getting ready to make your debut in the classroom, these exciting ways to use Google Earth are sure to infuse your lessons with plenty of punch. Find ideas for any age student and a handful of virtual tours that will not only help you instruct your students, but might even teach you something along the way. Elementary Younger students can have fun with these Google Earth lessons and ideas. Meteors. Middle School These lessons cover a wide range of subjects and are just right for middle school students. San Francisco: visualizing a safer city. High School and Beyond These lessons are great for high school and college students and include literature, geography, history, and more. Wild Sanctuary. Google Lit Trips. Image codes: rocket ship.png. MultiURL. Alpha—Computational Knowledge Engine. ALEX - Alabama Learning Exchange. 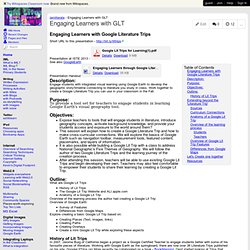 Work together to create a Google Literature Trip you can use in your classroom in the Fall. To provide a tool set for teachers to engage students in learning Google Earth's visual geography tool.Expose teachers to tools that will engage students in literature, introduce geography concepts, activate background knowledge, and provide your students access and exposure to the world around them? This session will explain how to create a Google Literature Trip and how to make cross-curricular connections. History of Lit Trips In 2007, Jerome Burg of California began a project as a Google Certified Teacher to engage students better with some of his favourite pieces of literature. Sources. Google Lit Trips for Young Readers. Where in the world will our youngest readers travel as they discover the world of books! 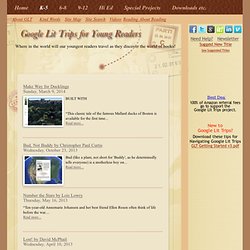 Reading About Reading Kind Words Site Map Site Search Videos. Google Earth. Wave - Communicate and collaborate in real time. As we announced in August 2010, we are not continuing active development of Google Wave as a stand-alone product. Google Wave will be shut down in April 2012. This page details the implication of the turn down process for Google Wave. Stage 1: Google Wave is read-only -- January 31, 2012 In this stage, you will no longer be able to create or edit waves. Marking a wave as read will also not be saved. Loading... Google SketchUp.