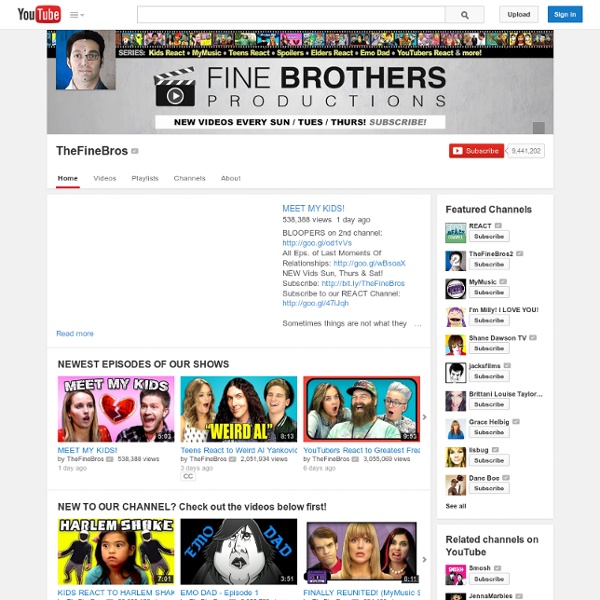 Must Watch Documentaries About The U.S. Real Scientific Evidence of Controlled Implosion "The preconceived notion of NIST is that there's no evidence for explosives, as in there is no point in looking. That is the most unscientific thing which you can possibly think of. Selected VOA Special English TV Videos The newer videos are near the top of each category. To see all the videos, go to VOA Special English TV Videos. Architecture Designing a Quake-Resistant Building Starts at the Soil Computers BrittaniLouiseTaylor's channel Want $3 off? Coupon! Click here! ARKive - Discover the world's most endangered species Wildscreen's Arkive project was launched in 2003 and grew to become the world's biggest encyclopaedia of life on Earth. With the help of over 7,000 of the world’s best wildlife filmmakers and photographers, conservationists and scientists, Arkive.org featured multi-media fact-files for more than 16,000 endangered species. Freely accessible to everyone, over half a million people every month, from over 200 countries, used Arkive to learn and discover the wonders of the natural world. Since 2013 Wildscreen was unable to raise sufficient funds from trusts, foundations, corporates and individual donors to support the year-round costs of keeping Arkive online. Therefore, the charity had been using its reserves to keep the project online and was unable to fund any dedicated staff to maintain Arkive, let alone future-proof it, for over half a decade.

TeacherTube - Teach the World Using digital video for cultural and linguistic awareness in ELT – an unofficial introduction Technology as such and technological skills in particular are not crucial for teachers to use digital video to enhance cultural and target language awareness in ELT. The main point is actually multitasking in the sense of the students using multiple senses simultaneously in order to absorb and handle the information given. Listening, reading, writing, speaking and even getting emotionally involved are at the centre of language learning. And whereas videos, be it fictional films, documentaries or newsflashes, have long been recognized as a useful tool in the language classroom, their place in the curriculum have been marginal, because so much information is given in such a short time span that it has been impossible to utilize them effectively in ELT.

Educational Videos: 197 Educational YouTube Channels You Should Know About - InformED :