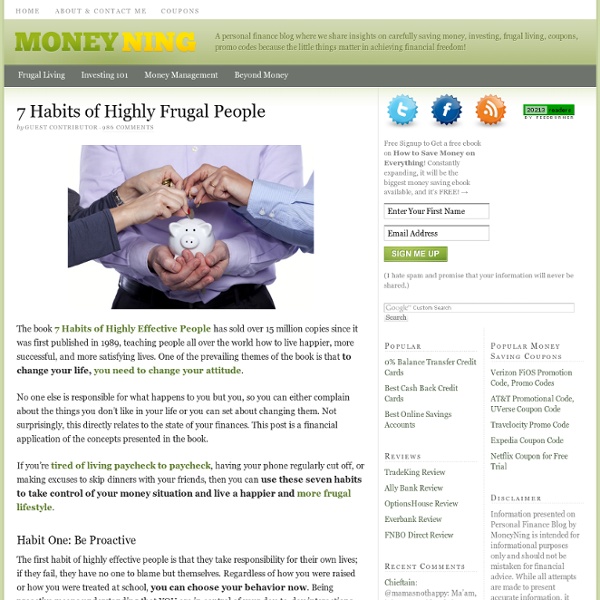 EmailEmail One of the most direct way to change your life, you need to change your attitude. No one else is responsible for what happens to you but you, so you can either complain about the things you don’t like in your life or you can set about changing them. Not surprisingly, this directly relates to the state of your finances. If you’re tired of living paycheck to paycheck, having your phone regularly cut off, or making excuses to skip dinners with your friends, then you can use these seven habits to take control of your money situation and live a happier and more frugal lifestyle. Habit One: Be Proactive The first habit to develop is to take responsibility; if you fail, you have no one to blame but yourself. [Here are 6 action steps to take when you feel financially vulnerable.] What most people forget is that though you can’t control the stimulus, you can control your response. How to be proactive for effective frugality: Take the first step. Habit Two: Begin with the End in Mind Related:  Frugality

Can’t Get Enough Coffee? It Might Be in Your Genes If you rely on a deep, sludgy kick of java to get you through the day, your need for caffeine might have something to do with your genes: a team of researchers have identified variations on two genes that may influence how much coffee people consume. The study was a meta-analysis of data from five studies involving 47,341 U.S. participants of European descent, and run by scientists from the National Cancer Institute, Harvard School of Public Health, Brigham and Women’s Hospital, and the University of North Carolina at Chapel Hill. The genes in question are known as CYP1A2, which is involved with the body’s caffeine metabolism, and AHR, which regulates CYP1A2. Scientists found that people with high-consumption variants of either gene on both chromosomes consumed on average about 40 mg more caffeine per day than people who didn’t have the mutation on either chromosome. (More on Time.com: Drinking Coffee May Lower Women’s Risk of Stroke) The Boston Globe‘s Daily Dose blog reported:

Frugal Living | Frugal Tips | Frugality EmailEmail Frugal Living is not just a way of life, it’s also a state of mind. We can aim to generate as much income as possible, but wealth won’t accumulate without wise spending habits. Frugality is about stopping the money leaks while still living a fulfilling life and it requires a mindset adjustment in order to succeed. Here are a few articles to start you off on the right path. Frugal Living Tips And here are a few practical tips so you can live frugally and happily. Example and Experiments and Practical Advice Need more tips? Frugal Living – What Do You Think? Do You Think Saving Money is Always Worth It? This is actually the beginning. Wait, Here’s The Best Part You can also sign up for the free frugal newsletter, and for a limited time, I’m giving away a free 7-part mini course on how to live simpler, more frugal and be happy.

What is car sharing? How It Works | City CarShare As a member, you're always covered through our insurance — up to $1 million in damages per incident. Opt-in to Buck-to-Deduct to reduce your deductible from $500 to $50. What a savings! learn more › › We’re making carsharing so simple, everyone will want to try it. Three easy steps. Become a member. The key fob: your key to green-powered savings. Now it’s your turn. Your turn. Make a real, green difference. Sign up now Need to talk it out or have questions? Everything you need to know about fast food What Drives You to Be Frugal EmailEmail People who know me sometimes wonder why I’m so frugal. They question why I don’t seem to eat out. They can’t understand why I rather watch a movie at home than go to the movie theaters and they certainly don’t feel that I’m actually enjoying life. Frugal Living Isn’t Just About Cutting Down Many people may feel that being frugal is about having and doing less but it’s really about doing more with what you already have. My parents used to tell me that they made up all these wonderful paper based games because they didn’t have the money to buy anything else. True frugal living to me is: Enjoying what you have instead of what you can’t getDetaching Yourself from Lure of ConsumerismLearning that Happiness Comes from Within I’m not totally immune to consumerism. I’m not frugal because there’s a need. Tagged as: Frugality, Money Stories Related Posts

Take Note of These 5 Frugal Habits of the Rich A fat salary isn’t the only way someone can strike it rich. Regardless of one’s income level, people who live below their means, invest wisely, and live modestly are on the path to real wealth. Here are five frugal habits that many of the upper class have adopted to build long-lasting wealth and financial independence: Drive a modest car. Your car should only serve the purpose of getting you safely and comfortably from point A to point B—nothing more. When you pull up to a stoplight in an expensive car, you might impress a stranger. Buy a modest house. Don’t carry wads of possible. Don’t pay full price. Have an action mentality. Truly rich people are those who take their income and turn it into wealth by investing wisely, saving, and living frugally. Kyle James owns Rather-Be-Shopping.com, which endorses frugal living and saving as much money as possible with online coupons, printable coupons, and personal finance tips.

5 huge health benefits of sweet potatoes (NaturalNews) Sweet potatoes, also commonly labeled as yams, are an excellent and inexpensive staple to have on hand. These deep orange-fleshed nutritional powerhouses add several important components to the diet. Their health and weight management benefits far exceed the nutritional value found in ordinary white and yellow fleshed potatoes.Sweet potatoes contain almost twice as much fiber as other types of potatoes. In addition, sweet potatoes contain high amounts of potassium. Beta-carotene or vitamin A is an important antioxidant. Beta-carotene also helps to internally protect your skin from sun damage by both deflecting and repairing cell damage caused by excessive UV exposure. Manganese is a little-discussed trace mineral that has some great health benefits. It also is a cofactor in enzymes that play an important role in the generation of energy as well as the efficient utilization of antioxidants. Sources for this article include:

How to Break Bad Habits EmailEmail Our habits may be based on our core principles, but the surrounding elements will often change them on a daily basis. Be it frugality, way of life or our morals, people around us slowly change our behaviors in a big way. When we were young, our parents help shape our values by setting examples. Do you have spending problems that cannot seem to be controlled? If you want to break your bad habits, you should surround yourself with people who don’t have that habit in question. My Spending Buddy One of our friends came to visit us for a few days and let me tell you why he’s special. Mentoring without Knowledge There are a few people I always have lunch with. The Frugality in Me If my parents never cared about money, it would be very difficult for me to develop my frugal habits. What I’m Trying to Say The people closest to you will always affect how you think and act. Our behaviors are shaped by people we are closed to. Tagged as: Better Yourself Related Posts

5 Frugal Living Ideas You Would Never Think Of" Cable is a huge expense. Depending on the options you choose and what provider you have, your bill might be $50 to $100 each month just to watch TV. That's $600 to $1,200 every year. It's something you can certainly live without, so the simple solution is to just cut the cord and save some money. If you can't give up your favorite shows, don't despair. Head to an electronics supply store and get an antenna. If you're still paying for broadband Internet service, there are a number of other ways to access TV shows without cable. Popular TV streaming services include Hulu, Netflix, Amazon and Blockbuster. One of the biggest problems many people have with getting rid of cable is the inability to watch live sports.

Flavonoids from blueberries and other fruits dramatically lower risk of diabetes (NaturalNews) Nearly one in ten people in the US have been diagnosed with diabetes and one in three are pre-diabetic, a strong indicator they will progress to full-blown diabetes in the near future without dietary intervention. Experts indicate that by the year 2050, one half of all American adults will fall into one of these two classifications, significantly lowering their quality of life and lifespan. Researchers from the Harvard School of Public Health report the result of a study in The American Journal of Clinical Nutrition in support of the potent effect of flavonoids from blueberries and other natural foods to significantly lower the risk of type 2 diabetes. Data from prior studies has drawn a link between specific flavonoids from dietary sources such as berries and improvement in insulin sensitivity and signaling to improve metabolic syndrome, a series of biomarkers that lead to diabetes. Sources for this article include: