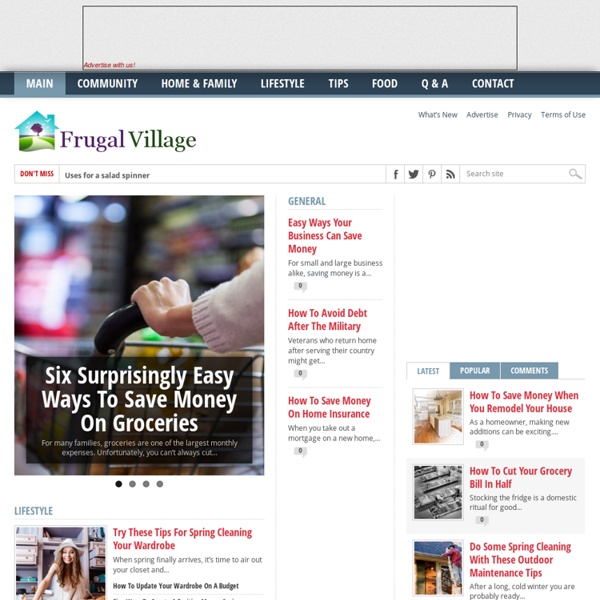 101 Handmade Valentine’s Day Ideas I’ve gathered some creative tutorials, free printables and just plain fabulous ideas to help make your Valentine’s Day extra sweet this year! There’s a little something for your home, gifts for friends and ideas for your children to share at school. It doesn’t have to cost you a ton to make Valentine’s Day super fun. Many of the ideas here can be made without another trip to the store! Make it a handmade holiday!

Free Things to Do - Free Tips on Saving Money at WomansDay As much as I love the word, I have to admit it makes me suspicious. Just this week I won a “free” vacation, but the fine print says I need to send in a cashier's check to claim my prize. Sadly, “free” is usually a sneaky way to clean out my wallet. PetroSun Drilling Forms Algae BioFuels Subsidiary PetroSun Drilling Forms Algae BioFuels Subsidiary Algae BioFuels will engage in the research and development of algae cultivation as an feedstock in the production of biodiesel. The R&D and production facilities for Algae BioFuels will be based in Arizona and Australia. Research is currently being conducted to determine the utilization of microalgae in fuel production, with applications being developed for biodiesel, ethanol, methanol, methane and even hydrogen. Independent studies have demonstrated that algae is capable of producing 30 times more oil per acre than the current crops now utilized for the production of biofuels.

20 Frugal Tips from Someone Who Lived Through the Great Depression During another weekend road trip to visit the family for Mother’s Day, I always make it a habit to drop in on Grandma and soak in a few hours worth of knowledge she’s accumulated over her near 75 years. Gifts were exchanged, I overindulged in home cookin’, but in the end, I sat with a piece of paper scribbling notes on what it was like for her (and other family members) to live through the Great Depression. I’m fortunate that I haven’t felt the effects of the recession, so I thought it would be interesting to get her point of view since she lived through one of the harshest periods of American history. In the end, I wasn’t exactly surprised because I’ve heard many of these frugal living rules over and over again, but it’s finally nice to get them down on paper. I hope you can learn as much from her wisdom as I have over the years.

Frugal Living: WHAT store bought items do you make at home & WHY? This thread has 144 replies. This forum is accessible only to subscribing members of Dave's Garden. There are many free features here, and about half of our forums are completely open to all members. 25 clever ideas to make life easier Via: amy-newnostalgia.blogspot.com Why didn’t I think of that?! We guarantee you’ll be uttering those words more than once at these ingenious little tips, tricks and ideas that solve everyday problems … some you never knew you had! (Above: hull strawberries easily using a straw). Via: apartmenttherapy.com Rubbing a walnut over scratches in your furniture will disguise dings and scrapes. Via: unplggd.com

After Ditching Auctions, Mobile Marketplace EggDrop Hits Half A Million Downloads EggDrop, essentially a mobile app alternative to Craigslist, is starting to pick up steam. The company now boasts half a million downloads of its app on iOS and Android, with $8 million in listings from across the 50 U.S. states and the U.K. (EggDrop’s top two markets). Jan Gehl, Copenhagen and Good Cities Michael O'Hare - April 10, 2009 “A good city is like a good party – people stay much longer than really necessary because they are enjoying themselves” So says Jan Gehl, the Danish architect who has been the brains behind Copenhagen’s transformation to a City for People and now advises New York City. So what is a Good City?

10 Things to Do With 10 Bucks: $10 and Under Meals Given our packed lives, it's no wonder we return again and again to the simple pleasures. Take, for example, cooking at home. What may seem like a mundane act actually satisfies us on a lot of levels: It's healthy, fun, creative and nourishing, not to mention a money-saver. But not all from-scratch meals are cheap to cook up. That's why we've come up with ten dinners under $10 that are low on cost—and big on flavor.

EatingWell: How To Save $250 On Groceries This Month By Matthew Thompson, Associate Food Editor for EatingWell Magazine A few months ago, my wife and I noticed an interesting phenomenon: Our grocery bill, which used to be so consistent, had started to slowly, steadily creep up week by week. At first we assumed that rising prices were to blame -- after all, the economy is in the gutter right now -- but a quick double-checking of some of our staple purchases proved this wasn’t the case. No, it turned out that our grocery costs were higher simply because we had stopped focusing on our core money-saving strategies.