Greece Pushes for Eurozone Summit Meeting to Unblock Debt Talks. Photo BRUSSELS — Prime Minister Alexis Tsipras of Greece asked on Wednesday for a summit meeting of eurozone leaders that would allow him to make his case for easier terms on sorely needed aid to help his country avoid bankruptcy. 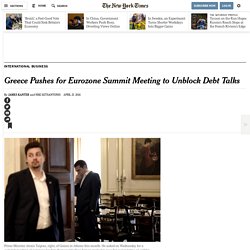 Without new rescue money by July, Greece could default on its debts and throw the 19-member eurozone into another period of chaos. There could also be a domestic upheaval in Greece similar to last summer, when the country had a referendum on the terms accompanying its third bailout, followed by snap general elections. Mr. Why the IMF must walk away from Greece. By Meg Lundsager ReutersMay 17, 2016 The depth of distrust between Greece and its creditors grows increasingly clear as both sides resume negotiations for a new bailout program. 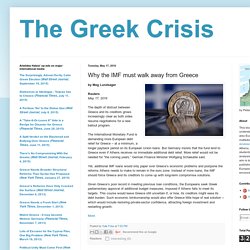 The International Monetary Fund is demanding more European debt relief for Greece -- at a minimum, a longer payback period on its European Union loans. But Germany insists that the fund lend to Greece even if Athens receives no immediate additional debt relief. Greece's latest financial emergency is both tragic and absurd. It’s that time of year again. 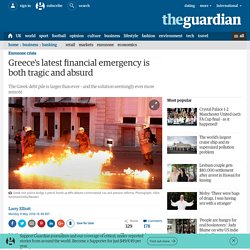 Greece is running out of money. There are violent protests in Athens. Eurozone finance ministers are gathering in Brussels in an “emergency” conclave to decide what to do next. Factbox: Greece Legislates Tax and Pension Reforms. ATHENS — Greek lawmakers early on Monday approved new tax and pension reforms, a move the left-led government hopes will help unlock fresh bailout funds under a financial lifeline worth up to 86 billion euros extended to Athens last year. 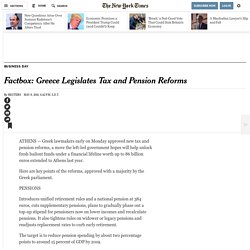 Here are key points of the reforms, approved with a majority by the Greek parliament. Introduces unified retirement rules and a national pension at 384 euros, cuts supplementary pensions, plans to gradually phase out a top-up stipend for pensioners now on lower incomes and recalculate pensions. It also tightens rules on widower or legacy pensions and readjusts replacement rates to curb early retirement. Greek Debt Talks Enter Familiar Summer Tumult. Photo BRUSSELS — The Greek debt talks are entering an all-too-familiar stage, as the country’s creditors on Monday sought to overcome a standoff over whether to give new aid to Athens. 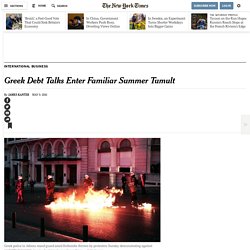 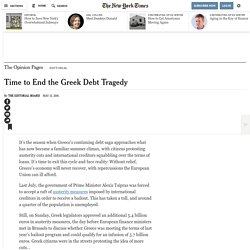 It’s time to exit this cycle and face reality: Without relief, Greece’s economy will never recover, with repercussions the European Union can ill afford. Last July, the government of Prime Minister Alexis Tsipras was forced to accept a raft of austerity measures imposed by international creditors in order to receive a bailout. This has taken a toll, and around a quarter of the population is unemployed. Still, on Sunday, Greek legislators approved an additional 5.4 billion euros in austerity measures, the day before European finance ministers met in Brussels to discuss whether Greece was meeting the terms of last year’s bailout program and could qualify for an infusion of 5.7 billion euros. Greek citizens were in the streets protesting the idea of more cuts. .

I.M.F. Takes Firmer Stand Favoring Relief for Greek Debt. Photo BRUSSELS — The International Monetary Fund is increasing demands for Greek debt relief, setting up another potential standoff with creditors over the country’s bailout, and threatening to create more political and economic uncertainty at an already tumultuous time for Europe. 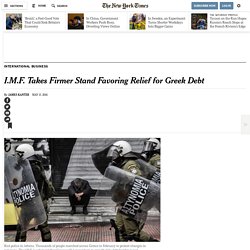 This I.M.F.’s position opens the next act in the long-running Greek debt crisis, casting the fund against Germany and many of the other eurozone creditors. The fund is playing the role of the financial police, adamant that Greece will never return to growth if its debt burden is not sustainable.