MONEY TRAIL EXPOSED: The Dakota Access Pipeline Is A Corrupt Monstrosity And Must Be Stopped » Page 2 of 2. In a 2014 presentation delivered to officials in Iowa, one of the four states the pipeline will run through, the company claimed the pipeline would “Increase America’s Energy Independence. 100% Domestic produced crude supports 100% domestic consumption.” 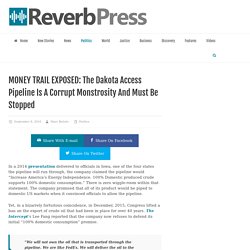 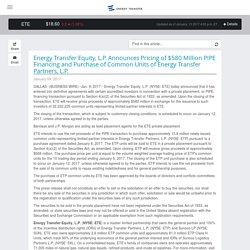 Upon the closing of the transaction, ETE will receive gross proceeds of approximately in exchange for the issuance to such investors of 32,222,225 common units representing limited partner interests in ETE. The closing of the transaction, which is subject to customary closing conditions, is scheduled to occur on , unless otherwise agreed to by the parties. and J.P. Energy Transfer: FUNDING FROM CAYMAN ISLANDS. 10.15 Waiver of Jury Trial. 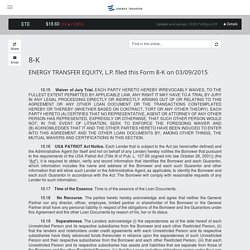 EACH PARTY HERETO HEREBY IRREVOCABLY WAIVES, TO THE FULLEST EXTENT PERMITTED BY APPLICABLE LAW, ANY RIGHT IT MAY HAVE TO A TRIAL BY JURY IN ANY LEGAL PROCEEDING DIRECTLY OR INDIRECTLY ARISING OUT OF OR RELATING TO THIS AGREEMENT OR ANY OTHER LOAN DOCUMENT OR THE TRANSACTIONS CONTEMPLATED HEREBY OR THEREBY (WHETHER BASED ON CONTRACT, TORT OR ANY OTHER THEORY). EACH PARTY HERETO (A) CERTIFIES THAT NO REPRESENTATIVE, AGENT OR ATTORNEY OF ANY OTHER PERSON HAS REPRESENTED, EXPRESSLY OR OTHERWISE, THAT SUCH OTHER PERSON WOULD NOT, IN THE EVENT OF LITIGATION, SEEK TO ENFORCE THE FOREGOING WAIVER AND (B) ACKNOWLEDGES THAT IT AND THE OTHER PARTIES HERETO HAVE BEEN INDUCED TO ENTER INTO THIS AGREEMENT AND THE OTHER LOAN DOCUMENTS BY, AMONG OTHER THINGS, THE MUTUAL WAIVERS AND CERTIFICATIONS IN THIS SECTION. 10.16 USA PATRIOT Act Notice. 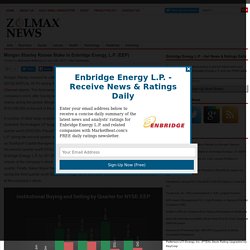 (NYSE:EEP) by 35.4% during the third quarter, Holdings Channel reports. The fund owned 5,898,845 shares of the company’s stock after buying an additional 1,543,383 shares during the period. Canadian banks are helping bankroll the Dakota Access Pipeline. If you ever doubt the power the Big Banks have over shaping climate change policy and practice, consider this: $3.75 billion of the $3.8 billion it will cost to build the Dakota Access pipeline is on credit. 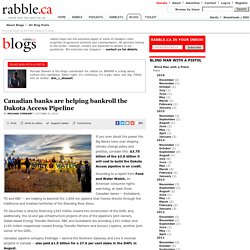 According to a report from Food and Water Watch, an American consumer rights watchdog, at least three Canadian banks -- Scotiabank, TD and RBC -- are helping to bankroll the 1,800 km pipeline that travels directly through the traditional and treatied territories of the Standing Rock Sioux. TD Securities is directly financing $365 million toward the construction of the DAPL and, additionally, the oil and gas infrastructure projects of one of the pipeline's joint owners, Dallas-based Energy Transfer Partners. RBC and Scotiabank are providing $341 million and $100 million respectively toward Energy Transfer Partners and Sunoco Logistics, another joint owner of the DAPL. It's not just Canada's Big Banks that have gotten involved at Standing Rock.

Like this article? Dakota Access pipeline company and Donald Trump have close financial ties. Donald Trump’s close financial ties to Energy Transfer Partners, operators of the controversial Dakota Access oil pipeline, have been laid bare, with the presidential candidate invested in the company and receiving more than $100,000 in campaign contributions from its chief executive. 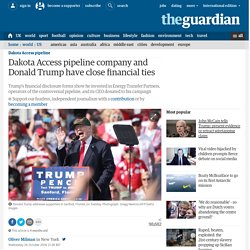 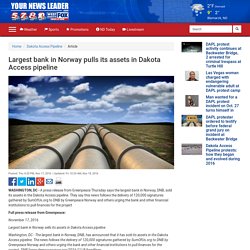 They say this news follows the delivery of 120,000 signatures gathered by SumOfUs.org to DNB by Greenpeace Norway and others urging the bank and other financial institutions to pull finances for the project Full press release from Greenpeace: November 17, 2016. Energy Transfer, Phillips 66 partner on Iowa pipeline - News - The Ames Tribune - Ames, IA. Houston-based energy giant Phillips 66 has become a joint venture partner with Energy Transfer of Dallas on its estimated $3.7 billion project to build a crude oil pipeline from North Dakota's Bakken and Three Forks shales to a hub in Patoka, Ill., that would cut across 18 Iowa counties including Story County. 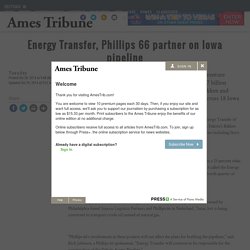 In a press release Tuesday, the two companies announced that Phillips 66 now owns a 25 percent stake in the Dakota Access Pipeline project that will affect Iowa as well as a second project called the Energy Transfer Crude Oil Pipeline. Both pipelines are expected to be operational by the fourth quarter of 2016, the companies said. The latter pipeline already exists, running from Patoka south to storage terminals owned by Philadelphia-based Sunoco Logistics Partners and Phillips 66 in Nederland, Texas, but is being converted to transport crude oil instead of natural gas. Sunoco LP : to Participate in Wells Fargo Conference. DALLAS, Dec. 6, 2016 /PRNewswire/ -- Sunoco LP (NYSE: SUN) ("SUN" or the "Partnership") announced that its senior management will hold 1x1 meetings with institutional investors today at the 15(th) Annual Wells Fargo Pipeline, MLP and Utility Symposium in New York City. 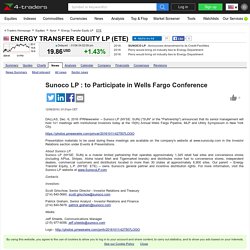 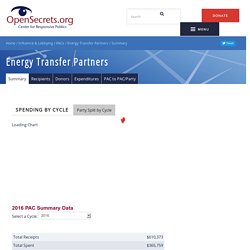 Feel free to distribute or cite this material, but please credit the Center for Responsive Politics. Faced With Massive Opposition to Dakota Access, Banks Could Still Pull Out by Bill McKibben. Most Americans live far from the path of the Dakota Access pipeline—they won’t be able to visit the encampments on the Standing Rock Sioux reservation where representatives of more than 200 tribes have come together in the most dramatic show of force of this environmental moment. They won’t be able to participate in the daily nonviolent battle along the Missouri River against a $3.7 billion infrastructure project that threatens precious water and myriad sacred sites, not to mention the planet’s unraveling climate. But most of us live near a bank. Virtually every name in the financial pantheon has extended credit in some form to the Dakota pipeline project.

Maybe there’s a Citibank branch in your neighborhood. Shift the Subsidies: Tracking the Flow of Public Money to the Fossil Fuel Industry. Standing Rock activists eye pipeline finances to cement Dakota Access win. Indigenous activists are focussing on the Dakota Access pipeline’s finances before Donald Trump takes office in an effort to further strain the oil corporation and cause continuing delays that they hope could be disastrous for the project. After the Obama administration denied the company a key permit to finish construction, Native American activists warned that the win was only temporary and that Trump, an investor in the pipeline corporation, would seek to quickly advance the project next year.

North Dakota's Top Oil Lobbyist Says He Feels Marginalized and Silenced by #NoDAPL - Blogtown - Portland Mercury. How One Organization Unravels Some of the Mystery of Campaign Finance. Following the money in state politics can be overwhelming at best, and impossible at worst. Fortunately, political reporters, academics and citizens don’t have to start from scratch. Instead, they can search and click their way through 54 million campaign finance records meticulously gathered and filed by Edwin Bender and his team at the National Institute on Money in State Politics. NIMSP began nearly 25 years ago as a MacArthur-funded one-year project focused on the Northwest states. In that first year, a two-person staff digitized reams of campaign finance reports, which they distributed to reporters via fax and disk.

Six years and multiple project extensions later, Bender says they looked at the blossoming Internet and “understood that we had the potential to be a national organization.” I talked with Bender about the ever-expanding NIMSP, whose data is frequently cited in reporting by nationwide and local media, as well as by grassroots organizers and activists. Briefing: Dakota Access's Massive SubsidiesOil Change International. Oil Change International September 2016 The Dakota Access Pipeline has faced strong resistance from Native Americans, farmers, and ranchers along the proposed pipeline route. It’s also energized the broader climate movement and raised critical questions of protecting clean water, respecting native sovereignty, and rethinking eminent domain for private gain. This briefing brings to light another egregious aspect of the whole affair – the fact that U.S. taxpayers and ratepayers are heavily subsidizing the primary owners of the Dakota Access Pipeline project, to the tune of hundreds of millions of dollars each year.

Standing Rock activists eye pipeline finances to cement Dakota Access win. A Strategy to Stop the Funding Behind the Dakota Access Pipeline by Bill McKibben. Three Massive Mergers—Millions for One Bank and a Disaster for Food, Water, and Climate by Wenonah Hauter. You probably learned in high school that monopolies are bad for consumers; they eliminate the field of competition in the marketplace, leaving people with fewer options and higher prices. Mega-mergers in the food and energy markets are allowing a handful of corporations to dominate market sectors.

Three Affiliated Tribes officials said they’re not happy with the tax cut because more money is needed to pay for oversight, road repairs and other consequences of oil development. Tribal leaders have threatened since the law was passed to pull out of the oil tax revenue-sharing agreement that has raised more than $1.5 billion for the state and the tribes since 2008. The tax cut takes effect New Year’s Day. Laborers union applauds Dakota Access pipeline ruling. GoFundMe NoDAPL Search. Investor Relations - SEC Filings. Uncovered Emails Raise Suspicions of Oil Company Paying Police for DAPL Crackdown. Delays in Dakota Pipeline Could Mean Trump—Who Stands to Gain Financially from Construction—Gets to Decide.