The strange link between the DUP Brexit donation and a notorious Indian gun running trial. The shadowy donor group that gave Northern Ireland’s Democratic Unionist Party (DUP) £425,000 for lavish pro-Brexit advertising during the referendum campaign has links with a Danish national who has told openDemocracy that he was involved in a notorious 1990s gun-running case in India. 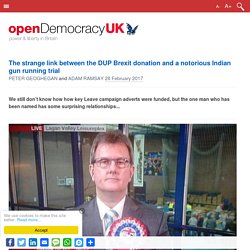 How corporate dark money is taking power on both sides of the Atlantic. It took corporate America a while to warm to Donald Trump. 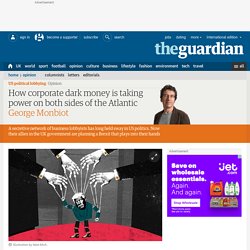 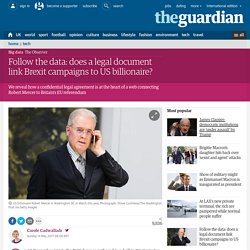 Nigel Farage, the campaign’s figurehead, was banished to the back of the room and instead an American political strategist, Gerry Gunster, took centre stage and explained its strategy. “The one thing that I know is data,” he said. “Numbers do not lie. Millionaire Brexit donor targets 140 remain MPs in general election. A leading donor behind the Brexit victory has pledged to fund a campaign to oust almost 140 pro-remain MPs in an attempt to ensure there is “no backsliding on Brexit” after the election. 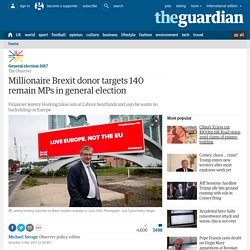 Jeremy Hosking, the multimillionaire City asset manager, told the Observer he was prepared to spend hundreds of thousands of pounds targeting MPs who backed staying in the EU, despite representing areas that voted for Brexit. The move is designed to exploit divisions in Jeremy Corbyn’s Labour party over Brexit and to seize seats that usually return a Labour MP. Hosking, who gave more than £1.5m to Vote Leave during the referendum campaign, said he wanted to help give Theresa May “an army” of pro-Brexit MPs that was “fully equipped and as big as possible”.

Tory candidates in 138 constituencies where most voters backed Brexit but which are represented by an opposition remain MP will be eligible to apply for funding. One Brexiter said: “There is no way to unpick Brexit that doesn’t involve civil war. The Sun spent £96,000 on poster backing Brexit. The Sun spent more than £96,000 publishing a pullout poster backing Brexit, forcing its parent company, News Group Newspapers, to register as an official leave campaign group with the Electoral Commission. 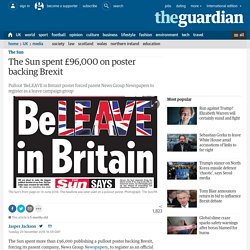 How the super-rich bought their Brexit victory - InFacts. Denis MacShane is the former Minister of Europe and author of Brexit: How Britain Will Leave Europe published by IB Tauris in January 2015. 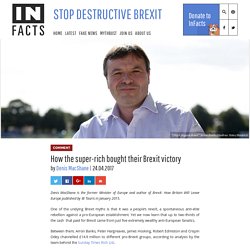 One of the undying Brexit myths is that it was a people’s revolt, a spontaneous anti-elite rebellion against a pro-European establishment. Yet we now learn that up to two-thirds of the cash that paid for Brexit came from just five extremely wealthy anti-European fanatics. Between them, Arron Banks, Peter Hargreaves, James Hosking, Robert Edmiston and Crispin Odey channelled £14.9 million to different pro-Brexit groups, according to analysis by the team behind the Sunday Times Rich List. Electoral Commission launches investigation into Leave.EU referendum finances. The Electoral Commission has launched an investigation into spending on the European Union referendum by the campaign group Leave.EU, it has announced. 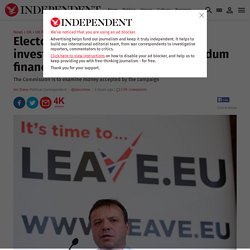 The Commission says the investigation will focus on whether the Brexit-supporting campaign took “impermissible” donations and said there were “reasonable grounds to suspect that potential offences” may have been committed by the campaign. A spokesperson said: “The Electoral Commission has begun an investigation into Leave.EU’s EU Referendum spending return. This followed an assessment which concluded that there were reasonable grounds to suspect that potential offences under the law may have occurred. “The investigation is focused on whether one or more donations – including of services – accepted by Leave.EU was impermissible; and whether Leave.EU’s spending return was complete. Hidden Millions Fund the Debate Over Britain's European Future. ‘Dark money’ is threat to integrity of UK elections, say leading academics. An urgent review of “weak and helpless” electoral laws is being demanded by a group of leading academics who say that uncontrolled “dark money” poses a threat to the fundamental principles of British democracy. 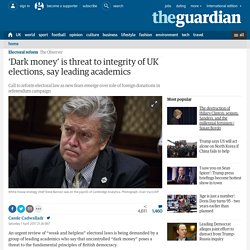 A working group set up by the London School of Economics warns that new technology has disrupted British politics to such an extent that current laws are unable to ensure a free and fair election or control the influence of money in politics. Damian Tambini, director of the media policy project at the LSE, who heads the group made up of leading experts in the field, said that new forms of online campaigning had not only changed the ways that political parties target voters but, crucially, had also altered the ability of big money interests to manipulate political debate.

“There is a real danger we are heading down the US route where whoever spends the most money is most likely to win. That’s why we’ve always controlled spending in this country. Tambini said: “It is urgent. Take Back Control: How big money undermines trust in politics – Transparency International UK. Who Funded Brexit? - The American Interest. The seismic vote for the UK to leave the EU has propelled a hitherto obscure individual to the center of national politics. 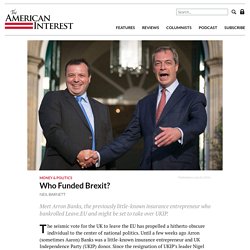 Until a few weeks ago Arron (sometimes Aaron) Banks was a little-known insurance entrepreneur and UK Independence Party (UKIP) donor. Since the resignation of UKIP’s leader Nigel Farage he is being tipped as a possible new party leader. Far from rendering the party obsolete, the leave vote makes UKIP all the more influential, as it will now harass the government of Prime Minister Theresa May until it triggers Article 50 and commences the formal exit process; despite having just one MP, UKIP now commands a far greater role on the national stage.

Who, then, is Arron Banks? In some ways he is a novel figure in British politics, having bought his way onto the national stage. But Banks himself is mysterious. [Conservative donors] regard him [Banks] as a total liability and nobody serious wants to have anything to do with him. 1.

DUP Loophole. UKIP. Arron Banks. Matthew Elliot. Peter Cruddas. Steve Baker. Hedge Funds. Russia. Cambridge Analytica. Everyone in the campaign to get Britain out of the EU is stabbing each other in the back. REUTERS/Luke MacGregor. 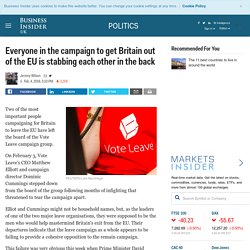 European commission announces crackdown on corporate tax loopholes. The EU executive has announced a further clampdown on offshore tax avoidance and shell companies in response to the Panama Papers. The European commission wants tax authorities to be able to identify the real owners of offshore funds in an attempt to stop individuals and companies avoiding tax by hiding money and assets in opaque companies and offshore trusts. The EU executive has also promised a robust new law to clamp down on lawyers and tax advisers helping clients stash money in offshore islands, although details remain sketchy. The EU recently agreed measures to compel big companies to disclose their earnings and tax bills after a public outcry about multinationals using legal loopholes to lower their taxes. But following the leak of 11.5m files exposing the tax secrets of the global elite, EU officials extended their focus to tax havens.