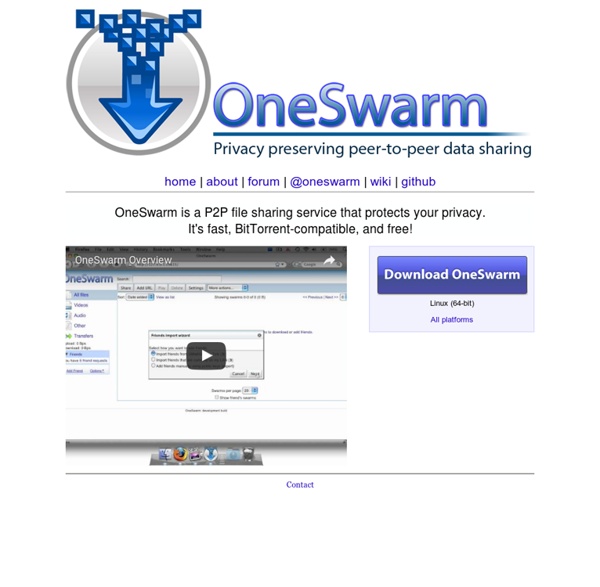 Man-in-the-middle attack In cryptography and computer security, a man-in-the-middle attack (often abbreviated to MITM, MitM, MIM, MiM or MITMA) is an attack where the attacker secretly relays and possibly alters the communication between two parties who believe they are directly communicating with each other. One example is active eavesdropping, in which the attacker makes independent connections with the victims and relays messages between them to make them believe they are talking directly to each other over a private connection, when in fact the entire conversation is controlled by the attacker. The attacker must be able to intercept all relevant messages passing between the two victims and inject new ones. This is straightforward in many circumstances; for example, an attacker within reception range of an unencrypted Wi-Fi wireless access point, can insert himself as a man-in-the-middle.[1] Example of an attack[edit]

Test BitTorrent Sync (Pre-Alpha) Test BitTorrent Sync (Pre-Alpha) by BitTorrent on We like it when things work together. Now you can legally edit your online history Google suffered a blow to their aim of owning each last morsel of information on the internet when the EU ruled that the tech behemoth must remove any personal data held on people that is deemed "inadequate, irrelevant, or no longer relevant". The decision means that individuals will be able to request that the search engine removes links about them which provide information that they do not want to be known – ensuring their "right to be forgotten". Google and free speech activists have reacted with outrage, claiming that this severely reduces freedom of speech, as well as allowing internet users to edit their history and restructure the digital footprint that they've left on the online world. The court's decision was made after a Spanish man requested that notice of his house being repossessed was removed from a major news website: he'd paid the debts, so why was the information relevant anymore? That news article about the time you drove into a supermarket while off your face?

Introducing BitTorrent Surf For the past six months, we’ve been working on a new web client alpha. Today, we’re excited to invite you to try it. Say hi to Surf. And start downloading content, directly from your browser. Track Who’s Tracking You With Mozilla Collusion LONG BEACH, Calif. — Mozilla CEO Gary Kovacs took the TED stage Tuesday morning to introduce Collusion, a Firefox browser add-on that lets you track who’s tracking you across the web for behavioral targeting purposes. Describing the medium as “an area of consumer protection that’s almost entirely naked,” Kovacs argued that the price we’re now being asked to pay for connectivenss is our privacy, and in turn, it’s “now time for us to watch the watchers.” Collusion looks to offer more transparency to users by creating a visualization of how your data is being spread to different companies as you navigate the web.