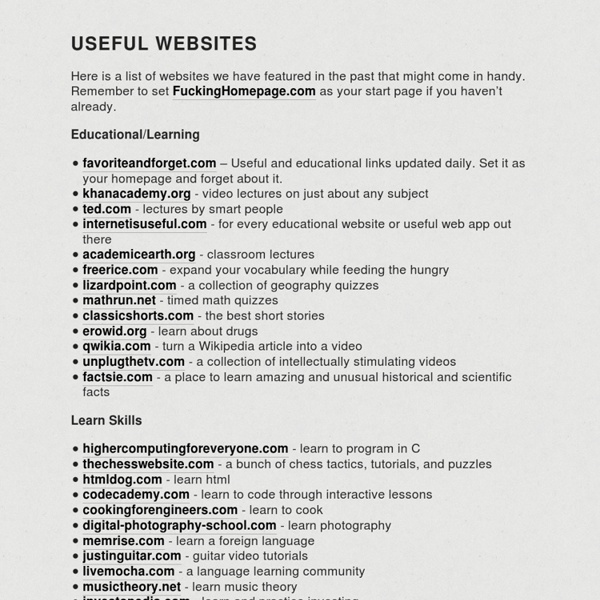 Here is a list of websites we have featured in the past that might come in handy. Remember to set FuckingHomepage.com as your start page if you haven’t already. Educational/Learning favoriteandforget.com – Useful and educational links updated daily. Set it as your homepage and forget about it.khanacademy.org - video lectures on just about any subjectted.com - lectures by smart peopleinternetisuseful.com - for every educational website or useful web app out thereacademicearth.org - classroom lecturesfreerice.com - expand your vocabulary while feeding the hungrylizardpoint.com - a collection of geography quizzesmathrun.net - timed math quizzesclassicshorts.com - the best short storieserowid.org - learn about drugsqwikia.com - turn a Wikipedia article into a videounplugthetv.com - a collection of intellectually stimulating videosfactsie.com - a place to learn amazing and unusual historical and scientific facts Learn Skills Useful Web Apps Entertainment - Music, Movies, Sports, Books

100 Documentaries To Expand Your Consciousness Free your mind & expand your awareness. Here is a list of over 100 documentaries you can watch for free online. They are about Science, Consciousness, ETs, you name it. My recent project ..........KITCHEN I just finished working on this kitchen project and I am very happy about the outcome. Please take a look. The client wanted a neutral scheme in the kitchen. So, I chose to use the natural shades of wood in beige and dark oak.

Pavlov’s Dogs by Saul McLeod published 2007, updated 2013 Like many great scientific advances, Pavlovian conditioning (aka classical conditioning) was discovered accidentally. During the 1890s Russian physiologist Ivan Pavlov was looking at salivation in dogs in response to being fed, when he noticed that his dogs would begin to salivate whenever he entered the room, even when he was not bringing them food. At first this was something of a nuisance (not to mention messy!). Pavlovian Conditioning Pavlov (1902) started from the idea that there are some things that a dog does not need to learn.

40 Must-See Historical Photos EmailEmail While some photographs capture our attention because of how the artist behind the picture has decided to compose the shot, others are fascinating simply because of the subjects that they depict. Below are some captivating photographs that tell stories about our past, depicting the people, places and events that have shaped the course of history. Some of these pictures tell us about history in a way that books and documents will never be able to. Source: boredpanda

25 Killer Websites that Make You Cleverer It’s easy to forget that we have access to a virtually limitless resource of information, i.e. the Internet. For a lot of us, this is even true at our fingertips, thanks to the ubiquity of smartphones and an ever-increasing push for online greatness by tech engineers all over the world. As a result, there are countless websites out there that are geared to make you smarter and more brilliant for either a low or no cost. Here are just 25 killer websites that may just make you more clever than ever before. 1. Duolingo WebGL Water Loading... Made by Evan Wallace This demo requires a decent graphics card and up-to-date drivers. If you can't run the demo, you can still see it on YouTube. Interactions:

BrainTrain - Changing the Way People Think Insurance coverage varies according to insurance company and state, but all major carriers now cover Cognitive Rehabilitation. It is billed in 15 minute units with fees paid at $35 to $55 per unit, depending on the region of the country. A treatment plan is required and progress must be documented. In addition, the patient needs to be qualified to show that he or she can possibly benefit from this form of treatment.

Brandon & Eliza: The Love Story The year was 1990. Brandon Lee had newly turned 25, and was still on his lifelong quest for acting stardom. He was a struggling actor, but an actor just the same. Brandon was still wrestling with the shadow of his father, and trying to prove to everyone that he was more than just an extension of Bruce. French-Canadian Journalist, Denis Monette interviewed Brandon in early 1990 for the French language Magazine 'Le Lundi'. Brandon articulated to Monette that he had been through much emotional turmoil associated with his father’s death, and he was still very much coming to terms with his father's shadow and legacy.

100 Amazing How-To Sites to Teach Yourself Anything Posted by Site Administrator in Online Learning May 7th, 2009 Learning new skills and expanding your knowledge doesn’t have to cost you an arm and a leg. There are loads of free resources on the Web that can help you find instructional videos, tutorials and classes to learn a wide variety of skills from fixing basic car problems to speaking another language. With 100 sites to choose from, you’re bound to find something here that will help you learn just about anything you could want. General Tutorials A Bite of Buddhism The four sublime mental states are qualities of mind that we cultivate in order to alleviate the suffering we experience in everyday life and to feel more connected to others—and the worries and fears we all share. In the language of the Buddha (Pali), they are called the brahma viharas , which means "the dwelling place of awakened beings." The good news for us unawakened beings is that it's easy to begin cultivating the brahma viharas . Indeed, they are an integral part of other religious, spiritual, and humanistic traditions. I present them here with a distinctly Buddhist "flavor."

40 Belief-Shaking Remarks From a Ruthless Nonconformist If there’s one thing Friedrich Nietzsche did well, it’s obliterate feel-good beliefs people have about themselves. He has been criticized for being a misanthrope, a subvert, a cynic and a pessimist, but I think these assessments are off the mark. I believe he only wanted human beings to be more honest with themselves. He did have a remarkable gift for aphorism — he once declared, “It is my ambition to say in ten sentences what others say in a whole book.” A hundred years after his death, Nietzsche retains his disturbing talent for turning a person’s worldview upside-down with one jarring remark. Body language, not facial expressions, broadcasts what's happening to us If you think that you can judge by examining someone's facial expressions if he has just hit the jackpot in the lottery or lost everything in the stock market -- think again. Researchers at the Hebrew University of Jerusalem and at New York University and Princeton University have discovered that -- despite what leading theoretical models and conventional wisdom might indicate -- it just doesn't work that way. Rather, they found that body language provides a better cue in trying to judge whether an observed subject has undergone strong positive or negative experiences. In a study published this week in the journal Science, the researchers present data showing that viewers in test groups were baffled when shown photographs of people who were undergoing real-life, highly intense positive and negative experiences. The study was led by Dr. Hillel Aviezer of the Psychology Department of the Hebrew University, together with Dr.