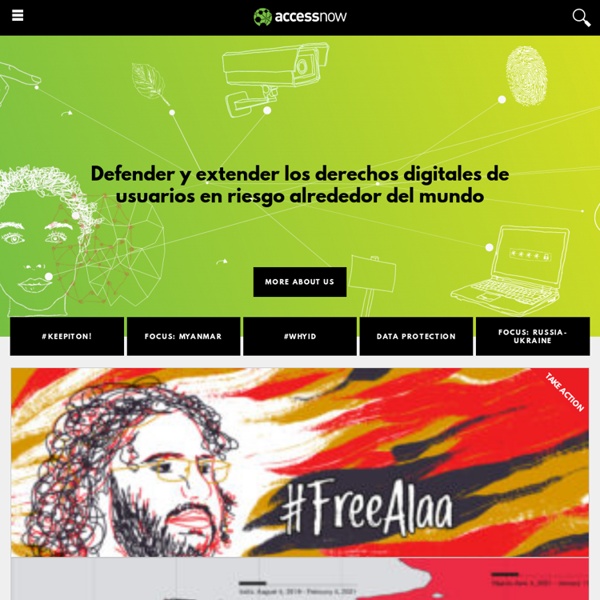 Full text of "Guerilla Open Access Manifesto" Guerilla Open Access Manifesto Information is power. But like all power, there are those who want to keep it for themselves. The world's entire scientific and cultural heritage, published over centuries in books and journals, is increasingly being digitized and locked up by a handful of private corporations. Want to read the papers featuring the most famous results of the sciences?

Access 4:05pm | 25 April 2013 | by Jeff Landale, English Fabiola Carrion, Katherine Maher, and Peter Micek contributed to this analysis. Google released its semi-annual transparency report today, indicating an increase in government requests for content removal worldwide--although more than half came from a handful of countries. At the same time, the report also revealed that government requests for user data have plateaued, and for the first time, both the proportion and raw number of user accounts whose data was turned over in response to requests decreased, leading to the question: Is this a turning point for privacy?

Declaration on Digital Freedom: FAQs PEN International The PEN Declaration on Digital Freedom is a concise statement of PEN’s views on free expression in the digital age that was approved by the Assembly of Delegates — representing 20,000 writers — at the PEN International Congress in Gyeongju, Korea in September 2012. The Declaration is a framework and advocacy tool to help 104 PEN Centers around the world respond to threats in digital media and promote human rights. Back to top The Declaration is grouped into four separate articles that summarize PEN’s stance on critical issues. They cover:

8,200+ Strong, Researchers Band Together To Force Science Journals To Open Access Evolutionary biologist Michael Eisen made this t-shirt design in support of the Elsevier boycott. Academic research is behind bars and an online boycott by 8,209 researchers (and counting) is seeking to set it free…well, more free than it has been. The boycott targets Elsevier, the publisher of popular journals like Cell and The Lancet, for its aggressive business practices, but opposition was electrified by Elsevier’s backing of a Congressional bill titled the Research Works Act (RWA). Though lesser known than the other high-profile, privacy-related bills SOPA and PIPA, the act was slated to reverse the Open Access Policy enacted by the National Institutes of Health (NIH) in 2008 that granted the public free access to any article derived from NIH-funded research. But the fight for open access is just getting started. Seem dramatic?

Hating The Media I hate the media. Not so much journalists because I have many who are dear friends, relatives, siblings, cousins, parents, grandparents (and employers!) I'm talking about the thing we now call the "meeja" - the ugly writhing ball of infotainment, give-the-people-what-they-want, play to the lowest, meanest, most cynically nostalgic, jejune, insipid impulses of the audience and reader - that it's mutated into. I can read a major news site from top to bottom and literally feel sick - not just because the endless horseshit that now passes for a "story" seems to be what people want to read, but that us - journalists and editors and news professionals, seem powerless or so lacking in imagination as to provide an engaging alternative. I hate that some muppet with a Twitter account can become front page news for saying crap journos say every minute of the day in newsrooms, but we'll then self-righteously crusade for public apologies thinner than the stock our product is printed on.

Explicit cookie consent OVER the past decade Western security agencies have been remarkably successful in keeping jihadist terrorists at bay. Put it down to diligence, surveillance technology, financial resources, the manageable numbers of potential terrorists and, often, good luck. The spooks have foiled complex plots, such as the one in 2009 to bring down airliners in mid-Atlantic. They have brought a steady stream of would-be terrorists before the courts. Occasionally, loners and misfits have succeeded in carrying out attacks, such as the bombing of the Boston marathon and the beheading of a British soldier in London, both in 2013. But until the murders in Paris last week, most people would have had Islamist terrorism low on their list of concerns.

40 MORE Of The Worst Rob Liefeld Drawings. - Progressive Boink A few years ago, the world-famous Brandon Stroud and I wrote an article running down the 40 worst Rob Liefeld drawings of all time. For a not-insignificant period of time, that article was the top Google result for "Rob Liefeld," which I still consider to be one of my greatest accomplishments in life. It's still in the top two or three results returned in just about any search engine if you type in his name. But beyond the fact that Rob Liefeld has never stopped being one of the most famous and best-selling comic book artists FOR TWENTY YEARS NOW, the joke was on us (not really), because our dear friend has never stopped putting out work.

Statement on Internet Confidentiality 13 November 2014 In 1996, the IAB and IESG recognized that the growth of the Internet depended on users having confidence that the network would protect their private information. RFC 1984 documented this need. Since that time, we have seen evidence that the capabilities and activities of attackers are greater and more pervasive than previously known. The IAB now believes it is important for protocol designers, developers, and operators to make encryption the norm for Internet traffic. Encryption should be authenticated where possible, but even protocols providing confidentiality without authentication are useful in the face of pervasive surveillance as described in RFC 7258.

Net Neutrality 101 When we log onto the Internet, we take lots of things for granted. We assume that we'll be able to access whatever Web site we want, whenever we want to go there. We assume that we can use any feature we like -- watching online video, listening to podcasts, searching, e-mailing and instant messaging -- anytime we choose. We assume that we can attach devices like wireless routers, game controllers or extra hard drives to make our online experience better. What makes all these assumptions possible is "Network Neutrality," the guiding principle that preserves the free and open Internet. Net Neutrality means that Internet service providers may not discriminate between different kinds of content and applications online.