Data markets compared - Data. The sale of data is a venerable business, and has existed since the middle of the 19th century, when Paul Reuter began providing telegraphed stock exchange prices between Paris and London, and New York newspapers founded the Associated Press. 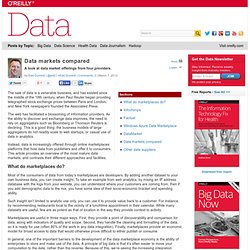 The web has facilitated a blossoming of information providers. As the ability to discover and exchange data improves, the need to rely on aggregators such as Bloomberg or Thomson Reuters is declining. This is a good thing: the business models of large aggregators do not readily scale to web startups, or casual use of data in analytics. Data Markets: The Emerging Data Economy. Editor’s note: Gil Elbaz is an entrepreneur and pioneer of natural language technology. 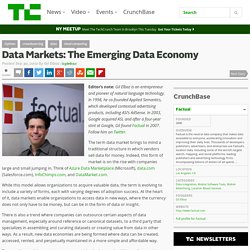 In 1998, he co-founded Applied Semantics, which developed contextual advertising products, including ASI’s AdSense. In 2003, Google acquired ASI, and after a four-year stint at Google, Gil found Factual in 2007. Follow him on Twitter. The term data market brings to mind a traditional structure in which vendors sell data for money. Indeed, this form of market is on the rise with companies large and small jumping in. While this model allows organizations to acquire valuable data, the term is evolving to include a variety of forms, each with varying degrees of adoption success. There is also a trend where companies can outsource certain aspects of data management, especially around reference or canonical datasets, to a third party that specializes in assembling and curating datasets or creating value from data in other ways. Consider the following examples: The Emerging Field of Data Markets – our competitive landscape.

One of the most common questions we’ve gotten since our international launch is “How is DataMarket different from X?” 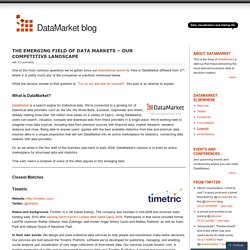 , where X is pretty much any of the companies or solutions mentioned below. While the obvious answer to that question is: “Try us out and see for yourself! “, this post is an attempt to explain. What is DataMarket? DataMarket is a search engine for statistical data. Or, as we wrote in the first draft of the business plan back in early 2008: DataMarket’s mission is to build an active marketplace for structured data and statistics.

Data Markets. Data markets, or data marketplaces, were supposed to solve the problem of discovery: delivering a hands off sales channel for organizations looking to monetize their data. 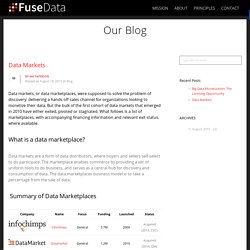 But the bulk of the first cohort of data markets that emerged in 2010 have either exited, pivoted or stagnated. What follows is a list of marketplaces, with accompanying financing information and relevant exit status, where available. Exploring Big Data Business Models & The Winning Value Propositions Behind Them. It goes without saying, innovative, sustainable Big Data Business Models are as pervasive and sought after as they are elusive (i.e. 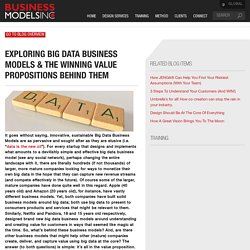 “data is the new oil”). For every startup that designs and implements what amounts to a devilishly simple and effective big data business model (see any social network), perhaps changing the entire landscape with it, there are literally hundreds (if not thousands) of larger, more mature companies looking for ways to monetize their own big data in the hope that they can capture new revenue streams (and compete effectively in the future). Of course some of the larger, mature companies have done quite well in this regard. Apple (40 years old) and Amazon (20 years old), for instance, have vastly different business models. What is data marketplace (data market)? - Definition from WhatIs.com. A data marketplace or data market is an online store where people can buy data. 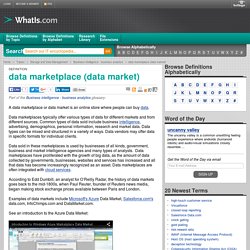 Data marketplaces typically offer various types of data for different markets and from different sources. Common types of data sold include business intelligence, advertising, demographics, personal information, research and market data. Data types can be mixed and structured in a variety of ways. 4 Business Models for the Data Age. Organizations have always depended on data — to manage operations, to communicate with customers, to pay employees and suppliers, to plan their futures, and so forth. 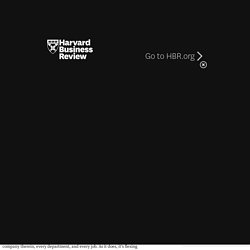 Those with the best data have enjoyed distinct advantages — in commerce, for example, better understanding the market leads to better products offered at better prices, and so forth. Data has enabled strategy, but, with few exceptions, neither driven strategy nor sat at its heart. That’s changing. Is Infochimps running from the Data Market business? Infochimps is one of the early champions of the data market business, and one that I’ve followed for several years. 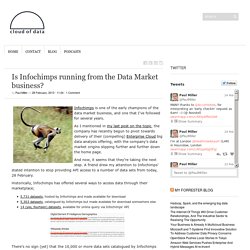 As I mentioned in my last post on the topic, the company has recently begun to pivot towards delivery of their (compelling) Enterprise Cloud big data analysis offering, with the company’s data market origins slipping further and further down the home page. And now, it seems that they’re taking the next step. A friend drew my attention to Infochimps’ stated intention to stop providing API access to a number of data sets from today, 28 February. Envisioning an Internet of Things Data Marketplace - Industrial Internet Consortium. By Sukriti Jalali, head of the IoT Initiatives group within the High Tech business unit at Tata Consultancy Services (TCS) A large number of use cases in Industrial Internet are targeted towards improving operational efficiencies and optimizing business processes, for instance in the area of manufacturing, supply chain, after sales service, workspaces, customer experience, smart premises and so on. 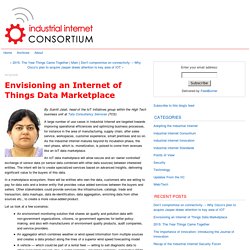 As the Industrial Internet matures beyond its incubation phase, the next phase, which is, monetization, is poised to come from avenues like an IoT data marketplace. An IoT data marketplace will allow secure and an ‘owner controlled’ exchange of sensor data (or sensor data combined with other data sources) between interested entities. The intent will be to create specialized services based on advanced insights, delivering significant value to the buyers of this data. Let us look at a few scenarios: Emergence Of A Utility Big Data Market Place. The Utility big data market place will act as a place for bringing together disparate sets of data from different entities like generators, transmitters, distributors, retailers, market, operators, regulators and customers; and integrate them to derive required intelligence as and when required. 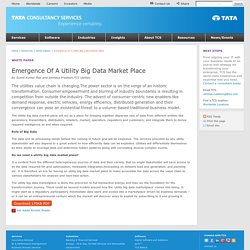 Role of Big Data The data and its processing needs behind the running of future grid will be explosive. The services provided by any utility stakeholder will also depend to a great extent on how efficiently data can be exploited. Utilities will differentiate themselves by their ability to leverage data and determine hidden patterns along with correlating diverse complex events. The Evolving World of ‘Connected Things’:Envisioning an IoT Data Marketplace. The Internet of Things (IoT) is rapidly gaining center stage. While IoT continues to drive business process optimization, the next frontier of this breakthrough concept is envisaged to be a business model based on a data marketplace - one that allows secure and owner-controlled exchange of IoT data between entities that use it to create specialized services, thereby delivering significant value to customers.

Since sensor data is estimated to represent 10 percent of the world's data, it is only a matter of time before useful, raw or processed sensor data is sold to third parties for further use, resulting in the emergence of advanced business and financial models. The concept of an IoT data marketplace, while still in its infancy, will lead to incremental value creation and monetization across the value chain. The technology components of an IoT marketplace are gradually maturing and converging. In this whitepaper, we discuss the following: DaaS - Data as a Service. How to seed a two-sided marketplace with the Yelp Model... and why Craigslist hates it! I’ve talked about the chicken and egg problem in seeding two-sided marketplaces at length earlier.

Producers won’t show up without Consumers and vice versa. One of the models that I’d proposed, that works especially well for startups like ShopKick is to build the value proposition in such a manner that your producers bring in the consumers. Another way of building a two-sided marketplace is to do it the other way round: Focus on the consumers and leverage their interest to bring in the producers. The pattern for implementing this is, in my opinion, an extension of the model originally made famous by Yelp.

The Yelp Model Yelp is an online local search service that allows consumers to search for businesses, read reviews and make decisions accordingly. So that’s special because? Two-sided markets have a problem because they require synchronization of producers and consumers coming onto the platform for interactions to happen. However… The Generalized Yelp Model Supply Proxies Making It Work. Big data: The next frontier for innovation, competition, and productivity. Big data will become a key basis of competition, underpinning new waves of productivity growth, innovation, and consumer surplus—as long as the right policies and enablers are in place.

The amount of data in our world has been exploding, and analyzing large data sets—so-called big data—will become a key basis of competition, underpinning new waves of productivity growth, innovation, and consumer surplus, according to research by MGI and McKinsey's Business Technology Office. Leaders in every sector will have to grapple with the implications of big data, not just a few data-oriented managers.

The increasing volume and detail of information captured by enterprises, the rise of multimedia, social media, and the Internet of Things will fuel exponential growth in data for the foreseeable future. Open interactive popup 1. 2. Podcast Michael Chui discusses how the scale and scope of companies' access to data is changing the way they do business. 3. 4. 5. 6. 7. Big Data - Cloud Services.