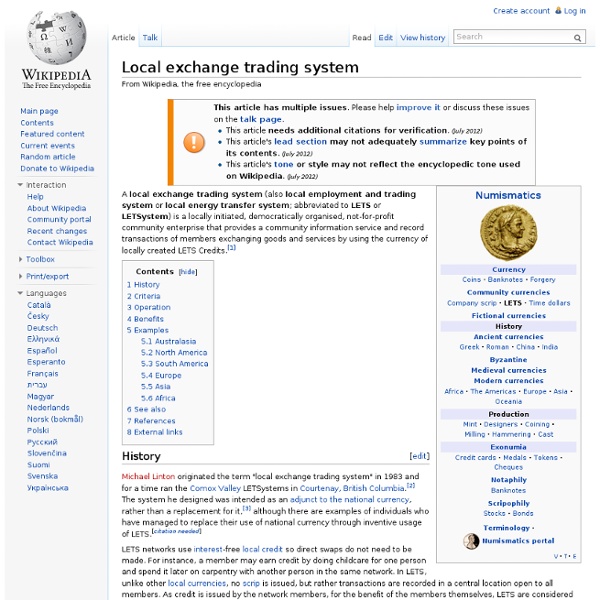 A local exchange trading system (also local employment and trading system or local energy transfer system; abbreviated to LETS or LETSystem) is a locally initiated, democratically organised, not-for-profit community enterprise that provides a community information service and record transactions of members exchanging goods and services by using the currency of locally created LETS Credits.[1] History[edit] Michael Linton originated the term "local exchange trading system" in 1983 and for a time ran the Comox Valley LETSystems in Courtenay, British Columbia.[2] The system he designed was intended as an adjunct to the national currency, rather than a replacement for it,[3] although there are examples of individuals who have managed to replace their use of national currency through inventive usage of LETS. A number of people have problems adjusting to the different ways of operating using a LETSystem. Criteria[edit] Of these criteria, "equivalence" is the most controversial. Operation[edit]

Snohomish Mutual Credit System > Local Currency > LETS Freiwirtschaft Freiwirtschaft (German for free economy) is an economic idea founded by Silvio Gesell in 1916. He called it Natürliche Wirtschaftsordnung (natural economic order). In 1932, a group of Swiss businessmen used his ideas to found WIR Bank (WIR). Structure[edit] Freiwirtschaft consists of three central aspects, usually summed up as The Three Fs: The (proposed) results include: History[edit] The basic economic ideas of Freiwirtschaft were published in 1890 by the Hungarian-Austrian economist Theodor Hertzka in his novel Freiland - ein soziales Zukunftsbild[1] (Freeland - A Social Anticipation).[2] Flaws of the monetary system[edit] Freiwirtschaft claims that current monetary systems are flawed. This is not the case in the financial markets. References[edit] Jump up ^ Theodor Hertzka: Freiland - ein soziales Zukunftsbild, Leipzig 1890 Summary on the website of the Otto-Lilienthal-MuseumJump up ^ Theodor Hertzka: Freeland - A Social Anticipation, St. External links[edit]

Community currency A Community Currency is often used as synonym for complementary currency, local currency, regional currency, alternative currency, auxiliary currencies, and private currencies. The debate is not easy to solve at the moment, since the words have different meanings to different people. All are currencies that have different designs and serve different purposes than our conventional money. They depart from the notion that money is essentially a human invention and instrument to influence the relations between citizens and organizations. A solid theoretical framework legitimizes this idea and in the past hundred years a lot of experimentation and experience was picked up with realizing social goals by the implementation of community currencies. Community Currency describes currencies that are used by groups with a common bond, like members of a locality, or association.Complementary currency describes a currency that exists as a supplement to our conventional (national) money.

Barter An 1874 newspaper illustration from Harper's Weekly, showing a man engaging in barter: offering chickens in exchange for his yearly newspaper subscription. The inefficiency of barter in archaic society has been used by economists since Adam Smith to explain the emergence of money, the economy, and hence the discipline of economics itself.[2] However, no present or past society has ever been seen through ethnographic studies to use pure barter without any medium of exchange, nor the emergence of money from barter.[3] Since the 1830s, direct barter in western market economies has been aided by exchanges which frequently utilize alternative currencies based on the labour theory of value, and designed to prevent profit taking by intermediators. Examples include the Owenite socialists, the Cincinnati Time store, and more recently Ithaca HOURS (Time banking) and the LETS system. Economic theory[edit] Adam Smith on the origin of money[edit] Limitations[edit] Absence of common measure of value