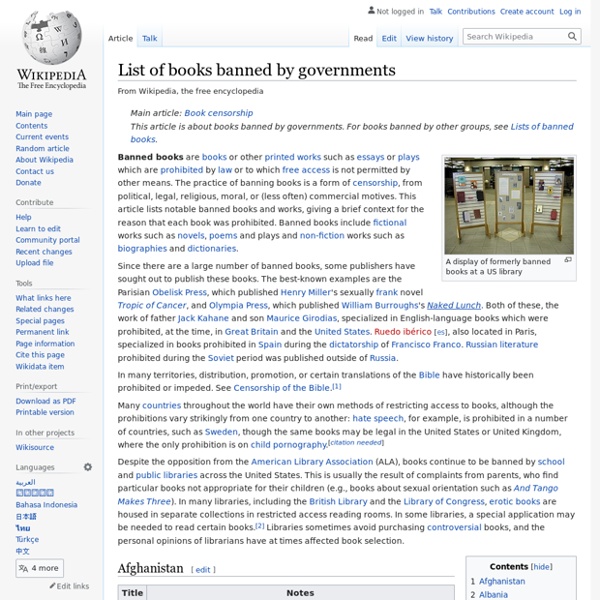 Wikipedia list article A display of formerly banned books at a US library In many territories, distribution, promotion, or certain translations of the Bible have historically been prohibited or impeded. See Censorship of the Bible.[1] Many countries throughout the world have their own methods of restricting access to books, although the prohibitions vary strikingly from one country to another: hate speech, for example, is prohibited in a number of countries, such as Sweden, though the same books may be legal in the United States or United Kingdom, where the only prohibition is on child pornography.[citation needed] Despite the opposition from the American Library Association (ALA), books continue to be banned by school and public libraries across the United States. Afghanistan[edit] Albania[edit] Argentina[edit] Australia[edit] Austria[edit] Bangladesh[edit] Belgium[edit] Bosnia and Herzegovina[edit] Brazil[edit] Canada[edit] Chile[edit] China[edit] Denmark[edit] Egypt[edit] El Salvador[edit] India[edit]

Torching the Modern-Day Library of Alexandria You were going to get one-click access to the full text of nearly every book that’s ever been published. Books still in print you’d have to pay for, but everything else—a collection slated to grow larger than the holdings at the Library of Congress, Harvard, the University of Michigan, at any of the great national libraries of Europe—would have been available for free at terminals that were going to be placed in every local library that wanted one. At the terminal you were going to be able to search tens of millions of books and read every page of any book you found. You’d be able to highlight passages and make annotations and share them; for the first time, you’d be able to pinpoint an idea somewhere inside the vastness of the printed record, and send somebody straight to it with a link. Books would become as instantly available, searchable, copy-pasteable—as alive in the digital world—as web pages. It was to be the realization of a long-held dream.

Frequently Challenged Books ALA's Office for Intellectual Freedom (OIF) receives reports from libraries, schools, and the media on attempts to ban books in communities across the country. We compile lists of challenged books in order to inform the public about censorship efforts that affect libraries and schools. Peruse the following pages to explore banned and challenged books by topic, genre, time, and audience. Top 10 Challenged Books: The Office for Intellectual Freedom has published lists of the most challenged books since 2001, compiled from media articles and censorship reports. Real books back. E-book sales plunge 20% - Apr.2017 New data suggest that the reading public is ditching e-books and returning to the old fashioned printed word. Sales of consumer e-books plunged 17% in the U.K. in 2016, according to the Publishers Association. Sales of physical books and journals went up by 7% over the same period, while children's books surged 16%. The same trend is on display in the U.S., where e-book sales declined 18.7% over the first nine months of 2016, according to the Association of American Publishers.

Top 100 Banned/Challenged Books: 2000-2009 1. Harry Potter (series), by J.K. Rowling 2. Already Read All of Ursula K Le Guin? Try 75+ Books She Recommended! In Ursula K. Le Guin’s passing, literature has lost a giant. In the cruelty that always occurs after an author’s death, it has brought more attention to her work. And so it should!

List of controversial issues You may also be looking for Wikipedia:Controversial articles. This is a list of Wikipedia articles deemed controversial because they are constantly being re-edited in a circular manner, or are otherwise the focus of edit warring. This page is conceived as a location for articles that regularly become biased and need to be fixed, or articles that were once the subject of an NPOV dispute and are likely to suffer future disputes. 100 most frequently challenged books by decade Skip to main content 100 most frequently challenged books by decade The ALA Office for Intellectual Freedom (OIF) does not claim comprehensiveness in recording challenges. Research suggests that for each challenge reported there are as many as four or five which go unreported. In addition, OIF has only been collecting data about banned books since 1990, so we do not have any lists of frequently challenged books or authors before that date. OIF receives reports from libraries, schools, and the media on attempts to ban books and compiles this information into lists in order to inform the public about censorship in libraries and schools.

Emily Wilson's 'Odyssey' Scrapes The Barnacles Off Homer's Hull In the 17th century, the poet John Dryden satirized the deep anxiety around letting women learn the Classics: But of all Plagues, the greatest is untold;The Book-Learn'd Wife in Greek and Latin bold.The Critick-Dame, who at her Table sits:Homer and Virgil quotes, and weighs their Wits; Alas! We Critick-Dames abound. But we were a long time coming. Because the classics were so closely associated with elite institutions, they came to symbolize a certain kind of cultural and political power, a power men were loath to give up. Controversy Auseinandersetzung ("controversy"), by Karl-Henning Seemann. Controversy is a state of prolonged public dispute or debate, usually concerning a matter of conflicting opinion or point of view. The word was coined from the Latin controversia, as a composite of controversus – "turned in an opposite direction," from contra – "against" – and vertere – to turn, or versus (see verse), hence, "to turn against." Legal controversy[edit] For example, the Case or Controversy Clause of Article Three of the United States Constitution (Section 2, Clause 1) states that "the judicial Power shall extend ... to Controversies to which the United States shall be a Party".

Advocacy, Legislation & Issues Video Cover Photos Full Infographic Infographic Shareables List of 2018 Banned and Challenged Books Free Philip K. Dick: Download 13 Great Science Fiction Stories Although he died when he was only 53 years old, Philip K. Dick (1928 – 1982) published 44 novels and 121 short stories during his lifetime and solidified his position as arguably the most literary of science fiction writers. His novel Ubik appears on TIME magazine’s list of the 100 best English-language novels, and Dick is the only science fiction writer to get honored in the prestigious Library of America series, a kind of pantheon of American literature. If you’re not intimately familiar with his novels, then you assuredly know major films based on Dick’s work – Blade Runner, Total Recall, A Scanner Darklyand Minority Report.

Banned Spotlight: Censored Comics Comics are challenged for all of the same reasons that other books are challenged, but they are uniquely vulnerable to challenges because of their visual nature. Because comics thrive on the power of the static image, a single page or panel can be the impetus for a challenge in a way that’s different from a passage in a book. Some people still believe that comics are low value speech or are made exclusively for children, and object to comics in the library because of these misconceptions. Here’s a sampling of the most common reasons comics are challenged: Profanity/offensive languageSex or nudityViolence and horrorDrugs and alcoholPolitically/socially/racially offensiveOffensive to religious beliefs Banned Books Week Coalition member Comic Book Legal Defense Fund specializes in the defense of comics and graphic novels and the First Amendment rights of the comics community.

40 Great Anthropology Books That Anyone Can Appreciate Humans studying humans is what anthropology essentially boils down into. Considering what all the subject entails, it comes as no shock to anyone at all that many find it absolutely gripping. But not everyone ends up with a formal education or profession in or near the field, thus rendering some reads a little too technical. But fortunately, a right fair amount of excellent popular anthropology books exist to make the extremely nuanced topic accessible to anyone.

Fringe theory A fringe theory is an idea or a collection of ideas that departs significantly from the prevailing or mainstream view. It can include work done to the appropriate level of scholarship in a field of study but only supported by a minority of practitioners, to more dubious work. Examples include pseudoscience (ideas that purport to be scientific theories but have little or no scientific support), conspiracy theories, unproven claims about alternative medicine, pseudohistory and so forth.