Spies spy and lurkers lurk, Angel!Dean/Hunter!Castiel Rec List. Riddelly. Villain Initiative, an avengers fanfic. A/N: Sadly I do not own Supernatural, Doctor Who, The Avengers, or Sherlock other wise Stony or Science Boyfriends would be canon along with Destiel, Merthur and JohnLock Prologue: Loki ran his fingers along the frigid stonewall of his tiny, damp, dark cell. 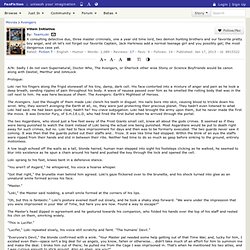 His face contorted into a mixture of anger and pain as he took a deep breath, sending ripples of pain throughout his body. A wave of nausea passed over him as he smelled the rotting body that was in the cell next to him. He was here because of them. Memory is the key. Science Bros: Bruce Banner / Tony Stark Fanfic Rec... Avengers Rec List. Am I making you uncomfortable? // Destiel Blood!kink Rec List. Avada kedevra. Road to somewhere. Am I making you uncomfortable? // Masterlist of Supernatural Fic Recs. 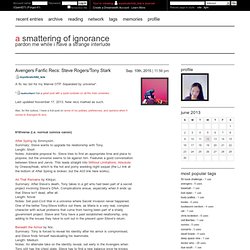