The Story Museum - 1001 stories from around the world 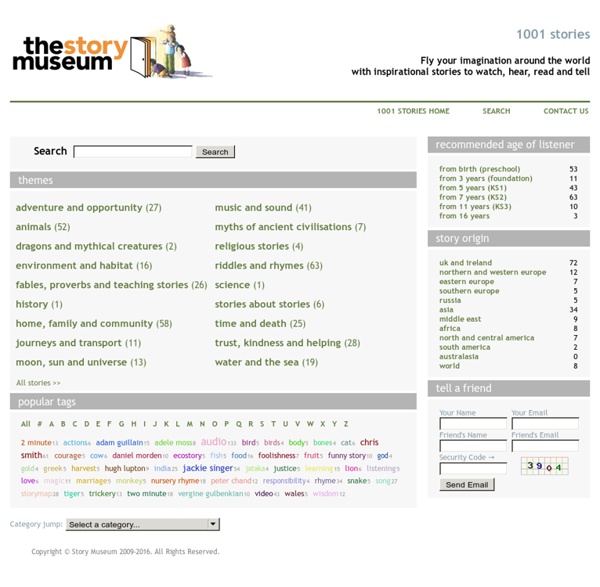 Learn 46 Languages Online for Free Open Culture Advertisement Get FREE Audio Books from Audible.com and Audiobooks.com How to learn languages for free? Pirate Ship Before you begin, the children should be taught the commands which the activity involves (see below). Children start by forming a line (one behind the other) directly in front of the teacher. The teacher then shouts a command and the children have to perform the activity associated with that command.

The Hitchhiker: Reading Comprehension As Andrea turned off the motorway onto the road to Brockbourne, the small village in which she lived, it was four o'clock in the afternoon, but already the sun was falling behind the hills. At this time in December, it would be completely dark by five o'clock. Andrea shivered. The interior of the car was not cold, but the trees bending in the harsh wind and the patches of yesterday's snow still heaped in the fields made her feel chilly inside. It was another ten miles to the cottage where she lived with her husband Michael, and the dim light and wintry weather made her feel a little lonely.

Case Files of Detective Nose | Mystery Digest It was a long and almost unbearable drive out into the desert as the hot sun beat down on Detective Nose’s face. As luck would have it, his air conditioning had broken down only two days earlier and despite having all the windows open, the heat was simply excruciating. As the inspector sipped on some of the water that he brought for the trip, the thought that he may have somehow missed his destination was beginning to penetrate his mind. For ESL English Language Learners Christopher Boone knows all the countries of the world and their capitals and every prime number up to 7,057. He relates well to animals but has little understanding of human emotions. Although gifted with a superbly logical brain, at fifteen, Christopher's carefully constructed world falls apart when he finds his neighbor's dog, Wellington, impaled on a garden fork, and he is initially blamed for the killing. Christopher decides that he will track down the real killer and turns to his favorite fictional character, Sherlock Holmes, for inspiration. The investigation leads him down some unexpected paths and ultimately brings him face to face with a crisis within his own family. A novel that is deeply funny, poignant, and fascinating in its portrayal of a person whose curse and blessing is a mind that perceives the world literally.

Experimenting with English (Part 2) – Activities for learners to do outside the classroom [26 and counting!] In my blog post Experimenting with English: scaffolding learner autonomy, I discussed how I approached helping my learners to use English outside the classroom, drawing on learner autonomy theory and methodology (e.g. Benson, 2011; Oxford, 2003; Smith 2003). Central to that project, alongside the very important element of discussion, was a handout I created for my learners. Here is a screenshot of a sample page, taken from the listening section: Place A Cylindrical Mirror On These Drawings And They Instantly Come To Life István Orosz is a Hungarian artist who is known for his use of the technique anamorphosis. Orosz will create a drawing, that at first glance could seem abstract. It is not until he places a cylindrical mirror on the artwork that the illustration comes to life.

English Language Centre Study Zone: Welcome! About the Study Zone The Study Zone is for students of the English Language Centre (ELC) at the University of Victoria. ELC teachers create the English language lessons and practice exercises. Irregular verbs again I have already published several posts on irregular verbs: and . However, a week ago a student of mine contacted me and asked me if I could create a way for him to learn the irregular verbs. He spends a lot of time driving so he asked me to prepare something to listen to in his car. So I did. For ESL English Language Learners What is most notable about this funny, touching, memorable novel is the resounding accuracy with which the author captures the voice of a boy on the brink of adulthood. Charlie is a freshman. And while's he's not the biggest geek in the school, he is by no means popular. He's a wallflower--shy and introspective, and intelligent. We learn about Charlie through the letters he writes. Charlie encounters the same struggles that many kids face in high school--how to make friends, the intensity of a crush, family tensions, a first relationship, exploring sexuality, experimenting with drugs--but he must also deal with his best friend's recent suicide.

Recipes for the EFL classroom Not sure what to do with a listening text coming up soon in the unit? Don’t like the comprehension questions in the book? Want some ideas to liven it up? Pre-listening Prediction work can be a really useful pre-listening activity, preparing the students for what they are about to hear. Students can use their world knowledge of the topic area along with their linguistic knowledge in order to make predictions about content (this is often referred to as activating schematic knowledge).