Empire's 500 Greatest Movies Of All Time 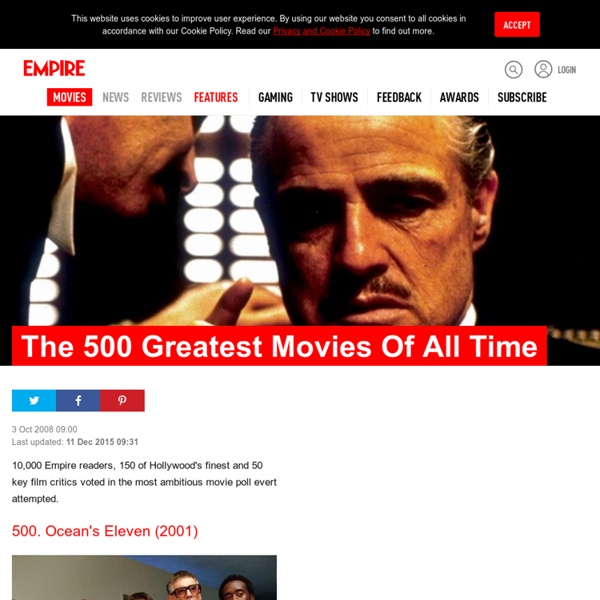 10,000 Empire readers, 150 of Hollywood's finest and 50 key film critics voted in the most ambitious movie poll evert attempted. 500. Ocean's Eleven (2001) Director: Steven Soderbergh Slick, suave and cooler than a penguin's knackers, Soderbergh's starry update of the Rat Pack crime caper not only outshines its predecessor, but all the lights of The Strip combined.Read our Ocean's Eleven review 499. Saw (2004) Director: James Wan The never-ending stream of sequels may have diminished its impact, but there's no denying the shock we got when we first entered the puzzle-loving psycho Jigsaw's fiendish, deathtrapped world.Read our Saw review 498. Director: Robert Zemeckis From the past to the present to the future and back again, Zemeckis hits his time-travelling stride with this chronology-screwing popcorner - only seven years to go until we discover if his vision of 2015 was on the money.Read our Back to the Future Part II review 497. 496. 495. 494. 493. 492. 491. 490. 489. 488. 487. 486.

The 50 Greatest Cult Movies of All Time It’s midnight somewhere. “Cult movie” is a hard thing to pin down. For the purposes of this list — celebrating the tenth anniversary of Donnie Darko — we’ve put a premium on the intensity and selectiveness of a movie’s appeal. We’ve also limited each director to one film. See you at midnight! 1. Year in Review: The 15 Best Foreign Films of 2009 Goddamn I’m sick of making lists. Thankfully this is the last one of the year for me, and even better it’s the one I find most important. Foreign movies don’t always get the attention or the exposure they deserve, so it’s nice to have the chance to highlight the ones I think are the best. And while some folks believe the term ‘foreign films’ should only apply to foreign language films I’m tired of that artificial restraint, so this list is open to movies from any and all countries outside of the US. (Except Luxembourg of course. They know why.)

Top Ten Films 1930-2011 2015 1. MAD MAX: FURY ROAD (George Miller) 2. MY GOLDEN DAYS (Arnaud Desplechin) 3. The Ten Best Horror Movies of 2008 Editor’s Note: As part of our Year in Review feature, we’ve tapped our resident horror expert Robert Fure for a list of the Ten Best Horror Movies of 2008. To read more of Robert’s horror reviews, check out The Coroner’s Report every Thursday. Being a horror fan is tough business and some years are worse than ever. 2008 saw its share of lame PG-13 movies (Prom Night) and an influx of crappy remade Japanese films (Shutter), in addition to having some of the more anticipated films (Trick ‘r Treat) delayed from wide release once again.

The best films of the '00s The scene was not unlike 12 Angry Men (or, in this case, 3 Shlubby Men, 1 Exasperated Woman, And A Dude On Speaker Phone From Arkansas): Armed with lists of their favorite movies of the decade, the five core A.V. Club film writers spent days sequestered in a stuffy, un-air-conditioned room—okay, it was actually just a few hours, and we were comfortable—in an effort to forge consensus on the Top 50 films of the ’00s. The result: A ranked list that is in no way arbitrary and will serve as the canonical standard for decades to come. 10 SXSW '11 Films We've Seen and Highly Recommend With over 120 films to choose from in just nine days at the 2011 South by Southwest Film Festival, even the most experienced planner will be unable to take in all of them. That is just simple math. Sometimes you just have to take a page from Neil ...

The 20 Best Cartoons Of The 90's The 90's were a golden age of cartoons. We had a blast putting together the 20 best, and we're sure this list will inspire some discussion. Our only criteria was that the cartoon had to start in the 90's, meaning a couple of very late in the decade entries were still eligible. 1001 Movies You Must See Before You Die list Hey, upidipi!! time to update your list ;) Those are the changes for 2014 Added : 1. Nostalgia de la luz (2010) 2. Wadjda (2012) 3. Martin Scorsese's Film School: The 85 Films You Need To See To Know Anything About Film Interviewing Martin Scorsese is like taking a master class in film. Fast Company’s four-hour interview with the director for the December-January cover story was ostensibly about his career, and how he had been able to stay so creative through years of battling studios. But the Hugo director punctuated everything he said with references to movies: 85 of them, in fact, all listed below. Some of the movies he discussed (note: the descriptions for these are below in quotes, denoting his own words).

Year In Review: The 11 Best Foreign Films of 2011 The title of this post is pretty self explanatory, so no introduction is really needed here. But… I do feel compelled to point out the same thing I point out every year. Nailing foreign releases down to a particular year isn’t an exact science. Obviously every film has an actual date of initial release, but most foreign titles don’t hit our shores until the following year, if at all. I try to go by original release date whenever possible though which means some of my choices have yet to be screened in the US outside of film festivals and import DVDs. That said, here’s a list of my eleven favorite foreign films for 2011 in alphabetical order.