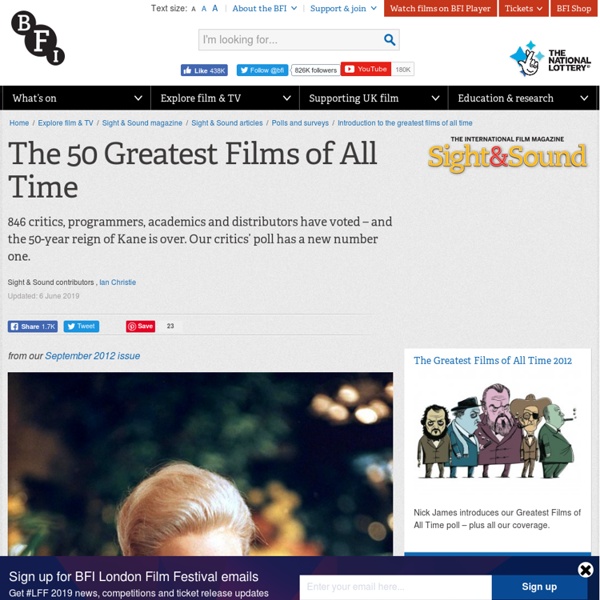 from our September 2012 issue Introduction Ian Christie rings in the changes in our biggest-ever poll. And the loser is – Citizen Kane. After 50 years at the top of the Sight & Sound poll, Orson Welles’s debut film has been convincingly ousted by Alfred Hitchcock’s 45th feature Vertigo – and by a whopping 34 votes, compared with the mere five that separated them a decade ago. But it does mean that Hitchcock, who only entered the top ten in 1982 (two years after his death), has risen steadily in esteem over the course of 30 years, with Vertigo climbing from seventh place, to fourth in 1992, second in 2002 and now first, to make him the Old Master. So does 2012 – the first poll to be conducted since the internet became almost certainly the main channel of communication about films – mark a revolution in taste, such as happened in 1962? Ian Christie’s full essay on changing fashions on our new poll is published in the September 2012 issue of Sight & Sound. The top 50 1. 2. 3. 4. 5. When F.W.

Independent Movies, Film Festivals, New Movies Reviews, News and Interviews - Film Threat Filmlinc.com | Film Society of Lincoln Center Criterion Collection - Filimadamı Popüler Filmler Listesi "Criterion Collection, 1984'te Robert Stein tarafından Voyager adıyla kuruldu. Daha sonra ortaklarıyla birlikte işi büyütüp film distribütörlüğü yaptılar. İlk olarak piyasaya laserdisc şeklinde 40 kadar film sürdülerse de laserdisc piyasadan kalktı. Liste hakkında ayrıntılı bilgi ve satın almak için: criterion.com diğer listeler Andrei Tarkovsky’s Very First Films: Three Student Films, 1956-1960 The great Russian filmmaker Andrei Tarkovsky made only seven feature films in his short life. (Find most of them online here.) But before making those, he directed and co-directed three films as a student at the All-Union State Cinema Institute, or VGIK. Those three films, when viewed as a progression, offer insights into Tarkovsky’s early development as an artist and his struggle to overcome the constraints of collectivism and assert his own personal vision. The Killers, 1956: Tarkovsky was fortunate to enter the VGIK when he did. Tarkovsky’s adaptation of Hemingway’s story (see above) was a project for Mikhail Romm’s directing class. Romm’s most important lesson was that it is, in fact, impossible to teach someone to become a director. Tarkovsky worked with a pair of co-directors on The Killers, but by all accounts he was the dominant creative force. The story of how we shot Hemingway’s The Killers is a simple one. There Will Be No Leave Today, 1958: Watch the full film here.