Athieism. Islam. Money idolatry. Fundamentalism. Reclaiming Jesus. The Preacher from the Royal Wedding Led a Vigil at the White House. Bishop Michael Curry Joins Christian March To White House To 'Reclaim Jesus' Archbishop Cranmer. He’s building a record about those persecuted because of their religion. May 5, 2018 Paris—Like many people, the Rev. 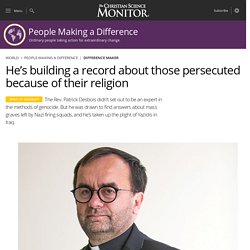 Patrick Desbois in 2014 had never heard of the Yazidis, the ethnic religious minority being decimated by the Islamic State (ISIS) in northern Iraq. At the time his gaze was still fixed closer to home. How does Congress have chaplains without violating the separation of church and state? - Religion News ServiceReligion News Service. A New York company must pay $5.1 million for demanding religious practices from employees. Celebrating a victory on the job with simple high-fives is one thing. 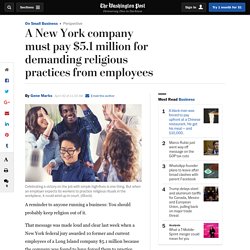 But when an employer expects its workers to practice religious rituals in the workplace, it could wind up in court. (iStock) A reminder to anyone running a business: You should probably keep religion out of it. That message was made loud and clear last week when a New York federal jury awarded 10 former and current employees of a Long Island company $5.1 million because the company was found to have forced them to practice certain religious activities. The company, United Health Programs of America, (and its parent, Cost Containment Group) provides insurance and other employee savings and benefit plan services for its customers.

[For the first time, a woman and non-Christian will lead this group that thinks government is too involved in religion]

Area Churches. Pope Francis ‘abolishes hell’, saying souls of unrepentant sinners will simply disappear. Steven Pinker on Trump, violence, and religion. 10 Reasons Christians Should Affirm Women as Pastors & Preachers. I’ve heard a lot of arguments as to why women are prohibited from teaching and preaching. 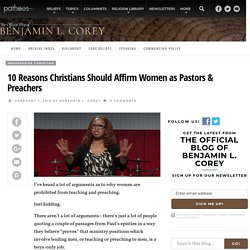 Just kidding. There aren’t a lot of arguments– there’s just a lot of people quoting a couple of passages from Paul’s epistles in a way they believe “proves” that ministry positions which involve leading men, or teaching or preaching to men, is a boys-only job. Here’s 10 reasons why I think today’s Christians should be affirming and supporting women serving in church leadership, whether it’s leading, teaching, or preaching the Gospel: 10.

The testimony of Scripture bears witness to female leadership in both the Old Testament and the early Church. A Detroit pastor and her church are building something big with tiny homes. In Detroit’s urban core -- ravaged by depopulation, unemployment and abandonment -- the Rev. 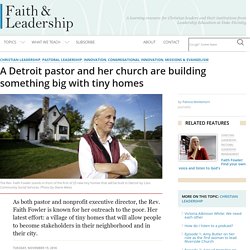 Faith Fowler is building something big with tiny homes. The pastor of Cass Community United Methodist Church, known for her innovative, entrepreneurial outreach to the poor, has conceived and captained a project to build a village of 25 very small houses that the working poor or formerly homeless can rent to own. “People will come here to see these tiny homes; they will become a destination,” said Fowler, 57, as she stood before the first Cass house, a neat 300-square-foot stucco Tudor with a stone faux chimney.

But the homes are about more than a place to live, Fowler said. Skeletons could provide clues to who wrote or protected the Dead Sea Scrolls. BOSTON — A decades-long debate over who once occupied a settlement located near the caves where the Dead Sea Scrolls were found has taken a chaste turn. 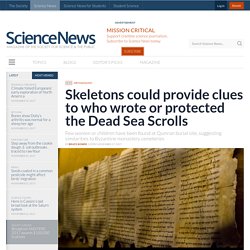 Analyses of 33 newly excavated skeletons of people buried at the West Bank site, Qumran, supports a view that the community consisted of a religious sect of celibate men. Anthropologist Yossi Nagar of the Israel Antiquities Authority in Jerusalem presented the findings November 16 at the annual meeting of the American Schools of Oriental Research.

The war against Pope Francis. Pope Francis is one of the most hated men in the world today. 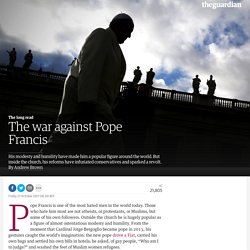 Those who hate him most are not atheists, or protestants, or Muslims, but some of his own followers. Supreme Court Brief: Religion Should Not be Used as a Sword to Discriminate. On December 5, the U.S. 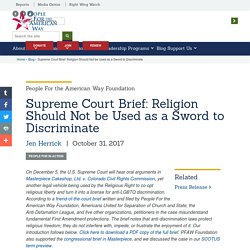 Supreme Court will hear oral arguments in Masterpiece Cakeshop, Ltd. v. Colorado Civil Rights Commission, yet another legal vehicle being used by the Religious Right to co-opt religious liberty and turn it into a license for anti-LGBTQ discrimination. According to a friend-of-the-court brief written and filed by People For the American Way Foundation, Americans United for Separation of Church and State, the Anti-Defamation League, and five other organizations, petitioners in the case misunderstand fundamental First Amendment protections. The brief notes that anti-discrimination laws protect religious freedom; they do not interfere with, impede, or frustrate the enjoyment of it. Our introduction follows below. The Protestant Reformation was 500 years ago. What needs reform in American religion today? Washington Post illustration; images from the Metropolitan Museum of Art and iStock This month marks a half-millennium since Martin Luther launched a challenge to the Catholic Church known as the Protestant Reformation, which remade Christianity in the West. 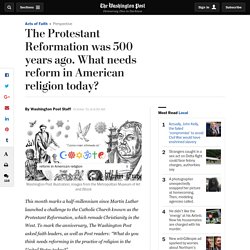 To mark the anniversary, The Washington Post asked faith leaders, as well as Post readers: “What do you think needs reforming in the practice of religion in the United States today?” Pastor Thabiti Anyabwile poses at home on Oct. 23 in Washington. Christian Writer Banned From Liberty University Campus After Criticizing Trump Ally. An evangelical Christian writer and pastor says he's been banned from the Liberty University campus for criticizing President Jerry Falwell, Jr., a longtime ally of President Donald Trump. 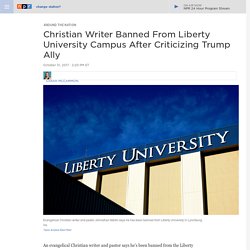 The writer, Jonathan Martin, said in a Twitter thread that he was on the campus of Liberty, a private Christian college in Lynchburg, Va., Monday night for a concert by the duo Johnnyswim when he was escorted away by armed campus police. Martin said he was photographed and told by Liberty police that he'd be "immediately arrested if I ever stepped foot on @LibertyU property again. " The Other Reformation: How Martin Luther Changed Our Beer, Too : The Salt. Left: A bartender at Hops & Barley brew pub pours a pint of beer in Berlin, Germany. 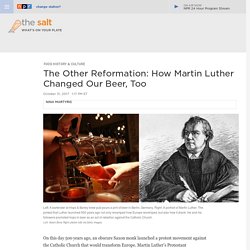 Right: A portrait of Martin Luther. The protest that Luther launched 500 years ago not only revamped how Europe worshiped, but also how it drank. He and his followers promoted hops in beer as an act of rebellion against the Catholic Church. Left: Adam Berry Right:ullstein bild via/Getty Images hide caption. Michael Cromartie’s good religion. News Release/Ethics and Public Policy Center Last Friday, friends and admirers of Michael Cromartie gathered in Virginia for his memorial service. Cromartie was a devout Christian, a vice president of the Ethics and Public Policy Center, and in one of his many gregarious exploits, a one-time mascot for the Philadelphia 76ers. In America, Does More Education Equal Less Religion? Overall, U.S. adults with college degrees are less religious than others, but this pattern does not hold among Christians The idea that highly educated people are less religious, on average, than those with less education has been a part of the public discourse for decades, but some scholars of religion have called this notion into question.

And a new analysis of Pew Research Center surveys shows that the relationship between religion and education in the United States is not so simple. On one hand, among U.S. adults overall, higher levels of education are linked with lower levels of religious commitment by some measures, such as belief in God, how often people pray and how important they say religion is to them. On the other hand, Americans with college degrees report attending religious services as often as Americans with less education. Other Pew Research Center data on religion and education. Indeed Very Many: Universalism in the Early Church. Indeed Very Many: Universalism in the Early Church. Culture - The obscure religion that shaped the West. Talk of ‘us’ and ‘them’ has long dominated Iran-related politics in the West.

At the same time, Christianity has frequently been used to define the identity and values of the US and Europe, as well as to contrast those values with those of a Middle Eastern ‘other’. Yet, a brief glance at an ancient religion – still being practised today – suggests that what many take for granted as wholesome Western ideals, beliefs and culture may in fact have Iranian roots. Culture - The obscure religion that shaped the West. Dissent with Modification: Soothing Evolution–Religion Tensions in the Classroom. On topics ranging from astrophysics to public health, rejections of scientific consensus can prove quite inflexible when bolstered by religious doctrine. But a new approach to teaching evolutionary biology appears to ease such tensions. Evolution and religion: Finding middle ground in the biology classroom. March 27, 2017 Evolution and religion often evoke strong emotional responses that can seem undeniably incompatible.

Yet, researchers at Arizona State University have discovered that using a short, evolution teaching module focused on the perceived conflict between religion and evolution actually reduced the number of students with this perception by 50 percent — a big success considering about half of all undergraduate students identify as religious. This Is Your Brain on God. Religious and spiritual experiences activate the brain reward circuits in much the same way as love, sex, gambling, drugs and music, report researchers at the University of Utah School of Medicine.

Bishop Ough participated in today’s event in his role as resident bishop of the Dakotas-Minnesota Area of The United Methodist Church. Conservative Christian nationalism has a scary kinship to white supremacy. Americans — not just liberals — have a religious literacy problem. Left-leaning Christian pastor John Pavlovitz calls out Trump & the religious hypocrites.

Evolution. The Real Origins of the Religious Right. The politics of Jen Hatmaker: Trump, Black Lives Matter, gay marriage, and more. From damage to discovery via virtual unwrapping: Reading the scroll from En-Gedi. Religious critique of economics. Our Religion Of Economism Is Bankrupt. A closer look at Jehovah’s Witnesses living in the U.S. Ted Cruz' Religion Adviser Talks to God, Can Add Scripture to Bible.

The case for gay marriage is made in the freedom of religion - Quartz. Peter Abelard. Kierkegaard's world, part 5. How to believe.