Self Sufficiency. Spanish couple have lived alone in La Estrella village for 45 years. Spaniards Juan Martin and Sinforosa Colomer have lived alone for 45 yearsThe couple are the only inhabitants of a small, abandoned rural townLocated near Valencia in eastern Spain, it was once home to 200 peopleHe said he would have left the town years ago if his wife had wanted toBut she was born and grew up in the town, and she refuses to leaveThe couple spend their days looking after animals and taking care of crops By Corey Charlton for MailOnline Published: 09:40 GMT, 5 November 2015 | Updated: 18:58 GMT, 5 November 2015 When the Spanish Civil War tore through Spain in 1936, thousands of people fled the country's rural towns for the cities in search of work. 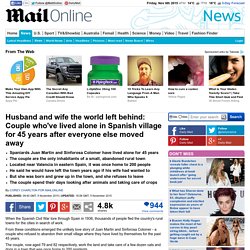 From these conditions emerged the unlikely love story of Juan Martin and Sinforosa Colomer - a couple who refused to abandon their small village where they have lived by themselves for the past 45 years. Husband and wife live alone in abandoned village La Estrella Loaded: 0% Progress: 0% MinimizeExpandClose. I Heart Intelligence A Letter from Hunter S. Thompson that Changed My Life. Science-Based Happiness Games & Activities: Happify. Discover The Power of Meditation: calm.com. Someone To Talk To, Online Therapy, Free Counseling - 7 Cups. 7 Reasons the 21st Century is Making You Miserable.

Scientists call it the Naked Photo Test, and it works like this: say a photo turns up of you nakedly doing something that would shame you and your family for generations. 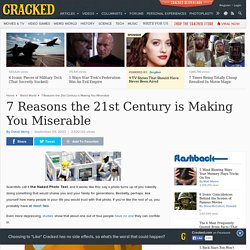 Bestiality, perhaps. Ask yourself how many people in your life you would trust with that photo. If you're like the rest of us, you probably have at most two. Even more depressing, studies show that about one out of four people have no one they can confide in. The Sad Bear 1, by Nedroid The average number of close friends we say we have is dropping fast, down dramatically in just the last 20 years. . #1. That's not sarcasm. The problem is we've built an awesome, sprawling web of technology meant purely to let us avoid annoying people. Get stuck in the waiting room at the doctor? From outofbalance.org Now that would be awesome if it were actually possible to keep all of the irritating shit out of your life. Oh, yeah. . #2. Lots of us were born into towns full of people we couldn't stand. But, you've grown up. That's right. . #3. 5 Most Ignored Principles Of Great Leadership.

Great Leadership, before being a way to walk, is first a potential to realize. 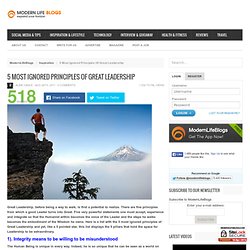 There are five principles from which a good Leader turns into Great. Five very powerful statements one must accept, experience and integrate so that the Humanist within becomes the voice of the Leader and the steps he walks becomes the embodiment of the Wisdom he owns. Here is a list with the 5 most ignored principles of Great Leadership and yet, like a 5 pointed star, this list displays the 5 pillars that hold the space for Leadership to be extraordinary. 1). Integrity means to be willing to be misunderstood The Human Being is unique in every way. 2).

Your Truth is your message and your Life is the channel that displays it. 3). Where the mind may, at times, seem blurry and confused, the heart always knows. 4). The greatest foundation of a Great leader lies in his humanity. 5). While a vision gives an aim into the future, the great leader knows one Truth. 7Life System: The Simple Structure That Will Change Your Life.

Today I have been given the honor of sharing with you a simple system that I have found to be an excellent way of structuring goals into an achievable format. 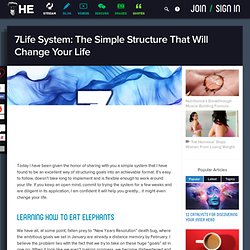 It’s easy to follow, doesn’t take long to implement and is flexible enough to work around your life. If you keep an open mind, commit to trying the system for a few weeks and are diligent in its application, I am confident it will help you greatly… it might even change your life. Learning How to Eat Elephants We have all, at some point, fallen prey to “New Years Resolution” death bug, where the ambitious goals we set in January are already a distance memory by February.

I believe the problem lies with the fact that we try to take on these huge “goals” all in one go. They say if you want to eat an elephant, break it down into small chucks. What Will This System Do For You? Many of you have no doubt heard of Pareto’s Law, which states that “20% of all input will account for 80% of all output” Integrating Your Goals Into A Structure.