Buddhism and Quantum Physics by Christian Thomas Kohl. A Strange Parallel of Two Concepts of Reality Abstract There is a surprising parallel between the philosophical concept of Nagarjuna and the physical concept of reality of quantum physics. 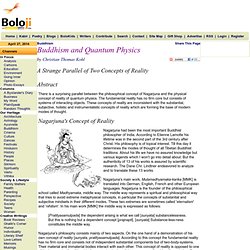 The fundamental reality has no firm core but consists of systems of interacting objects. These concepts of reality are inconsistent with the substantial, subjective, holistic and instrumentalistic concepts of reality which are forming the base of modern modes of thought. Nagarjuna's Concept of Reality Nagarjuna had been the most important Buddhist philosopher of India. Nagarjuna's main work, Mulamadhyamaka-karika [MMK] is translated into German, English, French and other European languages. [Pratityasamutpada] the dependent arising is what we call [sunyata] substancelessness. Nagarjuna's philosophy consists mainly of two aspects. Substantialism Subjectivism By subjectivist modes of thought, I understand the turning point to the subject that had been introduced by Ren' Descartes.

Holism Instrumentalism. Real Scientist of Life = Buddha + Einstein by Amrit Sorli. Awakening of the Observer in Science Abstract Who is the observer in a process of scientific experiencing of the universe? 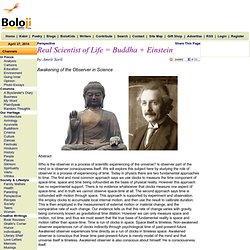 Russell Brand Interviews Quantum Physicist Dr. John Hagelin (Part 13) A Jewel at the Heart of Quantum Physics. By Natalie Wolchover | Quanta Magazine Physicists have discovered a jewel-like geometric object that dramatically simplifies calculations of particle interactions and challenges the notion that space and time are fundamental components of reality. 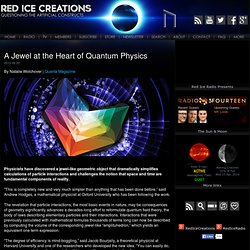 “This is completely new and very much simpler than anything that has been done before,” said Andrew Hodges, a mathematical physicist at Oxford University who has been following the work. The revelation that particle interactions, the most basic events in nature, may be consequences of geometry significantly advances a decades-long effort to reformulate quantum field theory, the body of laws describing elementary particles and their interactions. Interactions that were previously calculated with mathematical formulas thousands of terms long can now be described by computing the volume of the corresponding jewel-like “amplituhedron,” which yields an equivalent one-term expression. 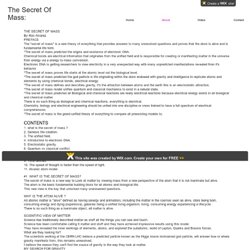 *The secret of mass predicted the origins and existence of electronic DNA. Chemical bonds are electrical information that originates from the unified field and is responsible for creating or manifesting matter in the universe from energy via a energy to mass conversion. Electronic DNA is getting researchers to view electricity in a very unexpected way with many unpredicted manifestations revealed from it's behavior. From the archive: Deepak Chopra’s 2002 talk at TED. As part of a public exchange of letters (his, ours, his) regarding TED’s views on the line between good and bad science, Deepak Chopra has asked us to post a talk he gave at TED in 2002 (four years before TED began free online distribution of some of its talks). 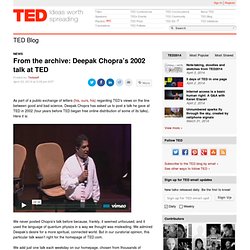 Here it is: We never posted Chopra’s talk before because, frankly, it seemed unfocused, and it used the language of quantum physics in a way we thought was misleading. We admired Deepak’s desire for a more spiritual, connected world. But in our curatorial opinion, this particular talk wasn’t right for the homepage of TED.com. We add just one talk each weekday on our homepage, chosen from thousands of candidate talks in our archives, and strive for a broad variety of topics and styles designed to inform, entertain and inspire. The Science of Energy and Thought. Subconscious Mind Power. A scientific approach explaining the power of thought. 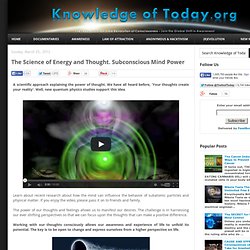 We have all heard before, 'Your thoughts create your reality'. Well, new quantum physics studies support this idea. Learn about recent research about how the mind can influence the behavior of subatomic particles and physical matter. If you enjoy the video, please pass it on to friends and family. The power of our thoughts and feelings allows us to manifest our desires. Working with our thoughts consciously allows our awareness and experience of life to unfold its potential. Our past is but a memory and the future is in our imagination, right now in the present moment is our true point of power. Dr. Amit Goswami, Ph.D. : Theoretical Quantum Physicist. The holographic universe: Where science and spirituality meet. 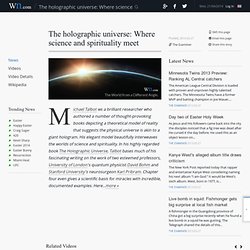 What we touch. What we smell. What we feel. They're all part of our reality. But what if life as we know it reflects only one side of the full story?