Spirituality for the new age

The Daily Routine by Vasant Lad, MASc. A daily routine is absolutely necessary to bring radical change in body, mind, and consciousness. 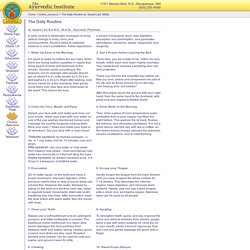 Routine helps to establish balance in one's constitution. It also regularizes 1. Wake Up Early in the Morning It is good to wake up before the sun rises, when there are loving (sattvic) qualities in nature that bring peace of mind and freshness to the senses. A person's biological clock, aids digestion, absorption and assimilation, and generates self-esteem, discipline, peace, happiness, and longevity. 2. "Dear God, you are inside of me, within my very breath, within each bird, each mighty mountain.

Thank you God for this beautiful day before me. After this prayer touch the ground with your right hand, then the same hand to the forehead, with great love and respect to Mother Earth. The Science of Pranayama. Do vedic yajnas really produce rain? We continue to see the importance accorded to Vedic yagnya (or yajna or yagya) ritual when it comes to rain-making. 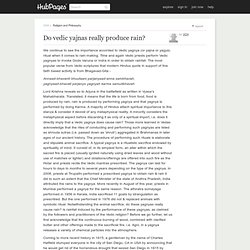 Time and again Vedic priests perform Vedic yagnyas to invoke Gods Varuna or Indra in order to obtain rainfall. The most popular verse from Vedic scriptures that modern Hindus quote in support of this faith based activity is from Bhagavad-Gita - Annaad-bhavanti bhuutaani parjanyaad-anna sambhavah,yagnyaad-bhavati parjanyo yagnyah karma samudbhavah Lord Krishna reveals so to Arjuna in the battlefield as written in Vyasa’s Mahabharata. Translated, it means that the life is born from food, food is produced by rain, rain is produced by performing yagnya and that yagnya is performed by doing Karma. Coming to more recent history in 1915, a gentleman by the name of Charles Hatfield stumped everyone in the city of San Diego, CA in USA by announcing that he would get rid of the horrendous drought that seized San Diego in 1915 by making it rain.

The Hindu Rite of Brahmana. One of the oldest living religions in the world, Hinduism is steeped in centuries of rituals and traditions. 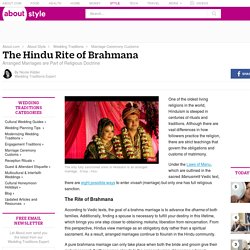 Although there are vast differences in how followers practice the religion, there are strict teachings that govern the obligations and customs of matrimony. Under the Laws of Manu, which are outlined in the sacred Manusmriti Vedic text, there are eight possible ways to enter vivaah (marriage) but only one has full religious sanction. The Rite of Brahmana According to Vedic texts, the goal of a brahma marriage is to advance the dharma of both families. Additionally, finding a spouse is necessary to fulfill your destiny in this lifetime, which brings you one step closer to obtaining moksha, liberation from reincarnation. A pure brahmana marriage can only take place when both the bride and groom give their mutual consent. Finding a Soulmate This ensures each person achieves the karma of spending their life with their predestined soulmate. 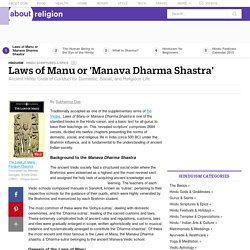 This 'revealed scripture' comprises 2684 verses, divided into twelve chapters presenting the norms of domestic, social, and religious life in India (circa 500 BC) under the Brahmin influence, and is fundamental to the understanding of ancient Indian society. Background to the Manava Dharma Shastra The ancient Vedic society had a structured social order where the Brahmins were esteemed as a highest and the most revered sect and assigned the holy task of acquiring ancient knowledge and learning. The teachers of each Vedic schools composed manuals in Sanskrit, known as 'sutras', pertaining to their respective schools for the guidance of their pupils, which were highly venerated by the Brahmins and memorized by each Brahmin student.