The cognitive benefits of play: Effects on the learning brain 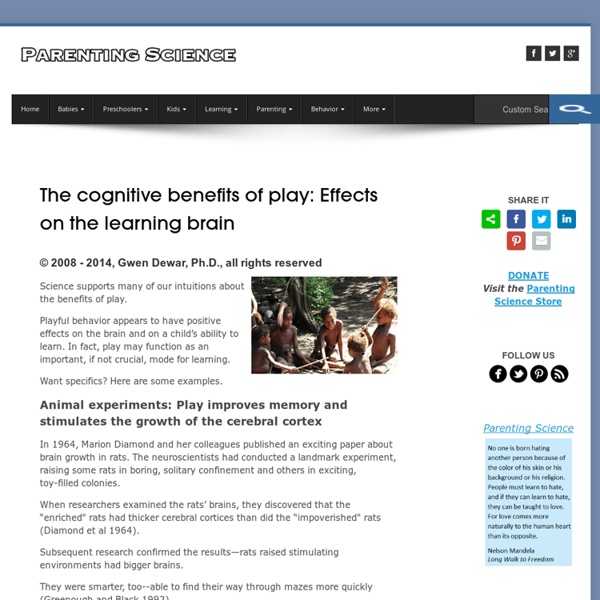 © 2008 - 2014, Gwen Dewar, Ph.D., all rights reserved Science supports many of our intuitions about the benefits of play. Playful behavior appears to have positive effects on the brain and on a child’s ability to learn. In fact, play may function as an important, if not crucial, mode for learning. Want specifics? Here are some examples. Animal experiments: Play improves memory and stimulates the growth of the cerebral cortex In 1964, Marion Diamond and her colleagues published an exciting paper about brain growth in rats. When researchers examined the rats’ brains, they discovered that the “enriched" rats had thicker cerebral cortices than did the “impoverished" rats (Diamond et al 1964). Subsequent research confirmed the results—rats raised stimulating environments had bigger brains. They were smarter, too--able to find their way through mazes more quickly (Greenough and Black 1992). Do these benefits of play extend to humans? How long should recess be? Language and the benefits of play 1. 2.

Why Movement is Essential in Early Childhood With so few years under their belts, my 3- and 6-year-old daughters are still learning to inhabit their bodies. They are learning how to maneuver themselves physically, how to orient themselves in space. As Vanessa Durand, a pediatrician at St. Christopher’s Hospital for Children in Philadelphia, says, freedom of movement is necessary for children to meet their developmental milestones: “Children learn by experiencing their world using all of their senses. The restriction of movement, especially at a young age, impedes the experiential learning process.”

Scientists Say Child's Play Helps Build A Better Brain : NPR Ed Deion Jefferson, 10, and Samuel Jefferson, 7, take turns climbing and jumping off a stack of old tires at the Berkeley Adventure Playground in California. The playground is a half-acre park with a junkyard feel where kids are encouraged to "play wild." David Gilkey/NPR hide caption Symbolic play and language development - ScienceDirect 1. Introduction 1.1. Relationship between symbolic play and language Symbolic play, or pretend play, and language are known to be highly interrelated (DeLoache, 2002, McCune, 2010, Smith and Jones, 2011). Both rely on representational capacity, namely, employing one element as a signifier to represent another element (McCune, 2010).

I Said I Want the Red Bowl! Responding to Toddlers' Irrational Behavior Pin It Amelia, told that she can’t have a fifth book before bedtime, shouts: “You are the meanest mommy! You are not invited to my birthday party!” Heuristic play Heuristic play is rooted in young children’s natural curiosity. As babies grow, they move beyond being content to simply feel and ponder objects, to wanting to find out what can be done with them. Toddlers have an urge to handle things: to gather, fill, dump, stack, knock down, select and manipulate in other ways. Household or kitchen utensils offer this kind of activity as every parent knows, and can occupy a child for surprising stretches of time. When toddlers make an enjoyable discovery – for instance when one item fits into another, or an interesting sound is produced – they often repeat the action several times to test the result, which strengthens cognitive development as well as fine muscle control and hand/eye coordination.

Scientists Say Child's Play Helps Build A Better Brain : NPR Ed Deion Jefferson, 10, and Samuel Jefferson, 7, take turns climbing and jumping off a stack of old tires at the Berkeley Adventure Playground in California. The playground is a half-acre park with a junkyard feel where kids are encouraged to "play wild." David Gilkey/NPR hide caption Importance of play for babies & children Play is more than just fun for babies and children. It’s how they learn best, and how they work out who they are, how the world works and where they fit into it. You can read this article in a selection of languages other than English. The importance of play Playing is one of the most important things you can do with your child, because play is essential for your child’s brain development.

The natives and the speakers Let me start with the good news. We are, all of us without exception, native speakers. This may come as a surprise to those of us who have had close encounters with the second/foreign language world, but is nonetheless true. It means that we are all competent users of language – more or less competent, of course, depending on all sorts of individual and social factors that make us clumsy or proficient in whatever we do.

Being Multilingual: You speak with an accent. I don’t. Accents are things that only other people have. They are, by extension, things that you don’t want to have. Accents are, in short, shortcomings. This is why, if someone tells you that “you speak with no accent”, you can be sure of two things: that you have received words of praise indeed; and that you speak with the same accent as that person. 6 Types of Play: How Children's Play Becomes More Social Play is a serious business. The pioneering developmental psychologist Lev Vygotsky thought that, in the preschool years, play is the leading source of development. Through play children learn and practice many basic social skills. They develop a sense of self, learn to interact with other children, how to make friends, how to lie and how to role-play. The classic study of how play develops in children was carried out by Mildred Parten in the late 1920s at the Institute of Child Development in Minnesota. She closely observed children between the ages of 2 and 5 years and categorised the types of play.

Deconstructing Role Play – Provide the Resources, Step Back and Watch Children’s Learning Flourish Hospital, vet’s surgery, post office, travel agent – themed role play areas are often seen as a must for an early years setting. They are often meticulously prepared to be aesthetically pleasing, covered in laminated words and pictures with the aim of enticing children in. But this is where I encountered a problem: in these areas, children are expected to come together to play out adult scenarios that are consistent with these themes. Listen to Your Mother Young children face a remarkable challenge in learning to use the language of their culture. Toddlers vary widely, however, in the rate at which they learn new words.1 A team of Harvard Graduate School of Education researchers set out to ask whether and how children's language environment can impact vocabulary development. In their study of mother-child pairs from low-income families, they found that mothers who used many different words (not just many words) had toddlers with faster growth in vocabulary use.