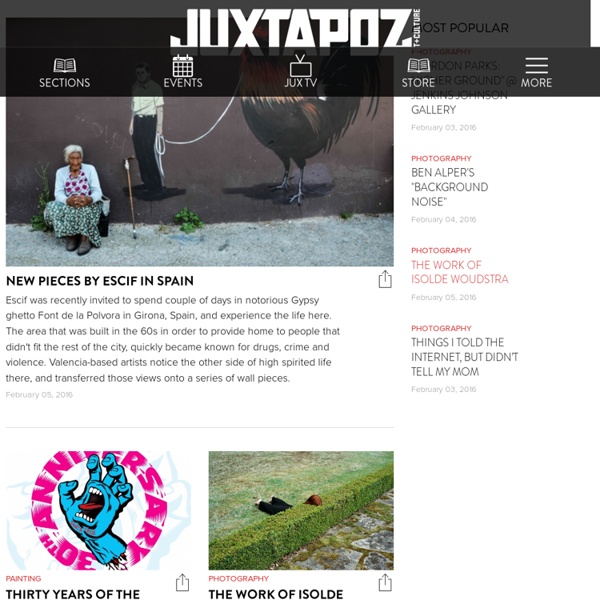 MICHAEL PAULUS - CHARACTER STUDY A character study of 22 present and past cartoon charactersmichael paulus I am currently offering ALL 22 of these shown here for SALE in a alternate version. I also have some larger pieces for sale Here. *Sign up for my Etsy Mailing List*and/or the Mailing List for This Site Animation was the format of choice for children's television in the 1960s, a decade in which children's programming became almost entirely animated.

The Descent: Hill-Bomb Photo Feature Art by James Callahan | Words and animation by Adam CreaganIT MUST HAVE BEEN one of the first thrills ever on a skateboard. The ancient art of hill-bombing remains a monster rush to this day and is a universal skate experience. No matter which way skating progresses, the urethane plunge has not diminished one bit and never will. Cooking strainers - portrait shadow art Cooking strainers are usually used to strain liquids off food products. It’s usually something we don’t take much notice of. Artist Isaac Cordal adds another purpose to strainers through his urban installation called Cement Bleak. He molds faces into the grids of colanders and places them by the sidewalk where shadows of the molded faces are projected. His plan is to try to make larger projection drawings using public light resources.

2010 amazing designs These products are some of the best designs we have seen in 2010. Check out their credit card folding knife: Founded by Iain Sinclair in 1964, Iain Sinclair Design is a design house that conceives, designs and develops highly innovative consumer products for global markets, using an in-house team of specialist industrial designers, electronic/mechanical engineers and CGI (Computer Generated Image) artists. The team is directed by Iain Sinclair and Grant Sinclair. The company designs are in the permanent collection of several museums worldwide including the Museum of Modern Art in New York and the Science Museum of London.

Horyon Lee: The Art of the Voyeur We cannot get over Horyon Lee's voyeuristic paintings. Combining the moment-to-moment compositing technique of time-lapse photography with the sensitive, careful brushwork of fine painting, Lee's works are a hybrid of many forms. His chosen subject matter has captured our erotica department's heart--focusing on the delicate, sensual movements of women moving and removing their undergarments, these paintings are uniquely sexy and innocent at the same time. Skeletons Of Looney Tunes Characters Korea's Arario Gallery hosted a exhibit by Hyungkoo Lee entitled Animatus. Animatus is an exhibition which allows to see the skeletons of famous Looney Tunes characters such as Tom & Jerry, Bugs Bunny, Wile E Coyote and Road Runner. Its not only the skeletons that are on show, but also detailed drawings on the skeletons of various characters. The show is created by Hyungkoo Lee who says the Animatus series started with the “intention to analyze anatomical structures and physical forms of animation characters, within the hypothesis to visualize their possible anatomical foundation.” Lee constructs the skeletons using a hybrid mix of real animal bones and synthetic materials. Check out Arario Gallery's website to see more.

Amazing Water Drawings with Ink To mark “World Water Day” (March 22nd), Solidarites International has launched an ad campaign to raise awareness about contaminated water that kills so many people in the world. It is a video developed by agency BDDP Unlimited, produced by Hush, and directed by Clement Beauvais. Official notes about the project:

Vintage Dutch Safety Posters One of our favorite destinations for vintage illustrations, graphic design and book and poster design, 50watts, recently updated their collection of safety posters from the Netherlands. See more of the posters here. La belleza de Kate Zambrano A consistently wide-eyed wanderer, Kate Zambrano explores the human condition though visual stimulation. Often coupling the standard idealization of beauty with a deep, haunting melancholy, she uses monochromatic and subtle colors in her paintings to create a genuine and simplified journey into individuality. She works with different mediums and techniques as well as incorporating texture and drips to create an unsettling concept of what is attractive. Her work is made to bring up the emotions, ideas, and opinions of the viewer.

Invisible Creature: Work Xbox One Viking monsters, space creatures, rabid animals & more. New work for Xbox One. A New Mark Redesigned for a new era, our mummy icon gets a facelift. Gift Maker Toys for PNC See our new project for Deutsch and build/win toys From "The 12 Days Of Christmas" song. Conrad Roset: The Art of the Muse Historically, the relationship between an artist and their muse can range from a complex, private and intimate connection to, in our world of new media, one of pure visual stimulation and inspiration, without physical benefits or complications. Since the beginning of time, muses have been present in the visual arts, driving the creative process and enhancing it for many notable artists. As a painter feeds off of their muse's energy or essence, they create work that often praises their model, and in Conrad Roset's case, expresses the sensuality and often simplistic beauty of a woman. With his delicate line-work and subtle erogenous focus, Roset portrays this gentle seduction, almost effortlessly.

Steve Smith I don’t know what’s the deal with these hyperrealist artists, once again, great work, but absolutely no information…so I’ll just tell you to look at Steve Smith’s pretty paintings, who apparently dreams of sunny days, holidays and sunglasses. Can’t say I blame him!