Garden roof covers beachside house in Australia by ArchiBlox. ArchiBlox has given this prefabricated beachfront house near Sydney a verdant plant-covered roof to help it blend into its clifftop setting. 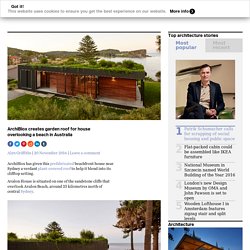 Avalon House is situated on one of the sandstone cliffs that overlook Avalon Beach, around 35 kilometres north of central Sydney. The property was designed by ArchiBlox, a Melbourne architecture studio specialising in modular buildings and that previously developed a carbon-positive house. Jony Ive and Marc Newson create room-size Christmas tree for Claridge's. An immersive Christmas tree installation by Apple's Jonathan Ive and industrial designer Marc Newson has been unveiled in London. 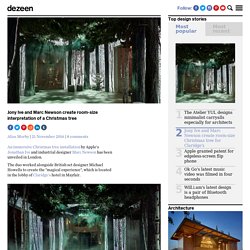 Call for entries to YAC's Castle Resort competition. Dezeen promotion: Young Architects Competitions is inviting architects and designers to come up with ideas for transforming the ruins of a medieval castle in Italy into a holiday destination. 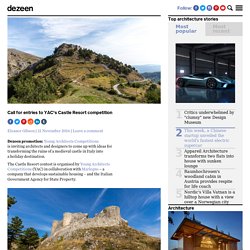 The Castle Resort contest is organised by Young Architects Competitions (YAC) in collaboration with Marlegno – a company that develops sustainable housing – and the Italian Government Agency for State Property. The ideas-based competition focuses on an abandoned fortress located in Roccamandolfi, a commune in the Italian region of Molise. Chunky concrete stair spirals through home in Japan by Kazunori Fujimoto. A concrete staircase spirals between the austere concrete floors of this house designed by Kazunori Fujimoto Architect & Associates for a seaside spot in Japan's Hiroshima Prefecture. 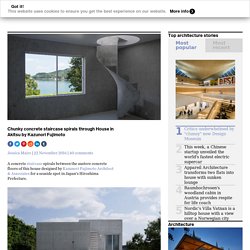 The 92.5-square-metre residence named House in Akitsu is located on a small peninsula near the city of Higashihiroshima, where it faces the scenic Seto Inland Sea. Two concrete cubes intersect to form the body of the building, which stands on a matching concrete platform. A broad flight of steps leads up to the building's raised entrance, while further steps cantilever from the facade of this first block. 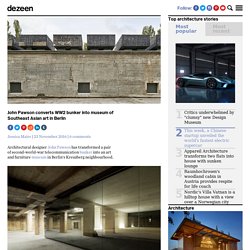 The Feuerle Collection is a private museum hosting the contemporary art, Imperial Chinese furniture, and ancient Southeast Asian art collections of Désiré Feuerle. Pawson's first major project in Berlin, it features exhibition spaces with the designer's characteristically minimalist style. Raumhochrosen's woodland cabin in Austria provides respite for life coach. Critics underwhelmed by "clumsy" new Design Museum. The Design Museum's new home inside the former Commonwealth Institute in London is an oak-heavy, hotel-like interior that is impressive, but could have been so much more exhilarating, according to critics. 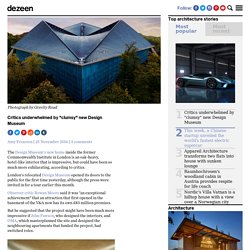 London's relocated Design Museum opened its doors to the public for the first time yesterday, although the press were invited in for a tour earlier this month. CEBRA plans subterranean visitor centre for historic Skamlingsbanken hill. Danish architecture studio CEBRA has been appointed to create an underground visitor centre for a hill that has hosted some of the most important speeches in Denmark's history. 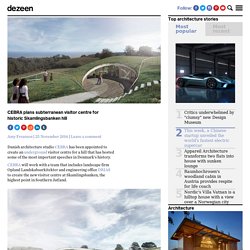 CEBRA will work with a team that includes landscape firm Opland Landskabsarkitekter and engineering office DRIAS to create the new visitor centre at Skamlingsbanken, the highest point in Southern Jutland. Created during the ice age, the hill was the site of several talks over the disputed Schleswig-Holstein territory in the mid-19th century, as well as the location of major celebrations after the first and second world wars. The visitor centre will commemorate this potted history, but will be buried underground so that it doesn't take block views. "The centre becomes an integrated part of the landscape," said CEBRA co-founder Carsten Primdahl. 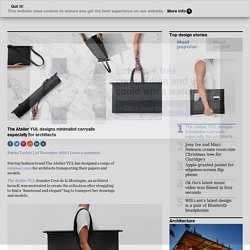 The Atelier YUL founder Cece de la Montagne, an architect herself, was motivated to create the collection after struggling to find a "functional and elegant" bag to transport her drawings and models. The collection features four carryalls, each handmade from leather. De la Montagne looked to a number of references when designing the collection, including modernist forms, Japanese tea rooms and Roman architectural principles of strength, function and beauty. Stella McCartney Launches Menswear Interview. AT a star-studded party last night to launch her debut menswear line - alongside a presentation of her spring 2017 womenswear collection - Stella McCartney made her mark (literally, her name glittered in big, bold lettering in every room) on a venue very familiar to her family - Abbey Road Studios. 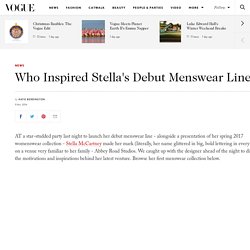 We caught up with the designer ahead of the night to discuss the motivations and inspirations behind her latest venture. Browse her first menswear collection below. Who or what was the inspiration behind your first menswear collection? There was so much inspiration behind the collection. Donald Trump’s Prison Wall By Estudio 3.14. Interns at Mexican architecture firm Estudio 3.14 decided to take on the concept of the America/Mexico border wall wished upon the real estate tycoon, former reality TV star and now President of the United States of America, Donald Trump. 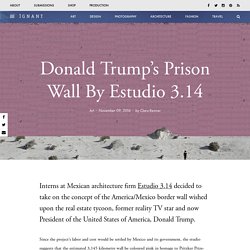 Since the project’s labor and cost would be settled by Mexico and its government, the studio suggests that the estimated 3,145 kilometre wall be coloured pink in homage to Pritzker Prize-winning Mexican architect, Luis Barragán. Besides the function as a border between Mexico and the United States the interns developed the original idea of Trump and gave the wall a second purpose; serving as a prison where “11 million undocumented people will be processed, classified, and/or deported.” The designers even added a viewpoint for US citizens to walk up stairs onto the platform and look down onto the other side to complete the “gorgeous perversity.” All images © Estudio 3.14. Standing Alone With Mankichi Shinshi.

Collaborative Installations By Alexandros Vasmoulakis. “We make fragile structures celebrating the ephemera, just like kids building sandcastles.” Alexandros Vasmoulakis and collaborative friends “explore the relation between magic and the mundane” by using objects found in ‘forgotten’ places and creating their ‘Collaborative Installations’. While limited only to tie-wraps and fishing line, they managed to make sheets fly, foam float, and large cubed objects stand on one corner. Traveling With The Clouds In Iceland. A Portrayal Of A Failed Society By Marco Bottin. Italian artist Marco Bottin transforms everyday objects into art pieces charged with political and socio-economic meaning. These objects show the collision between symbolic content and purpose of use.The artist concentrates on the desperateness of the human effort in finding a place in society and a purpose in life.

“In focusing all his expectation on possession, man becomes a sterile being who charges the world of objects with so much symbolical weight that the objects themselves revolt against him“, writes the artist. Bottini’s art objects whose aesthetics contradict heavily with their alarming message criticize the foundations of our modern societies that are based on capitalism and profit optimization. Not surprisingly, Bottin has been dealing with sociological topics for some time. In 2005 he graduated in Philosophy at Venice University after writing his thesis in Economic Sociology on the topic of gift and reciprocity. All images © Marco Bottin. From Marfa To Miami With Stella Consonni. Gucci 4 Rooms Immersive Art Project. Nendo "Un-Printed Material" @ Creation Gallery G8 in Ginza. With its latest exhibition, renowned design outfit nendo is revisiting its unique sketch-like 3D-printed pieces, building on the furniture it exhibited in Tokyo last year.

Dubbed “Un-Printed Material,” the display is intended to take on a medium that’s indispensable to graphic designers: paper. Said Nendo: Graphic designers use paper as a medium to express their ideas. Art 42 Museum Dedicated to Street Art Opens in Paris. Computer academy Ecole 42 has been known to disrupt traditional spaces since its advent as a tuition-free institution, helmed by billionaire tech entrepreneur Xavier Niel. In its latest move, the location will transform twice a week into France’s first museum dedicated to street art, going by the name Art 42. Longtime street art collector and head of the ICART’s art management school Nicolas Laugero-Lasserre offered to donate his collection to be on display throughout the school’s floors, which features 150 works from artists including Banksy, Shephard Fairey and JR.

Aiming to promote the movement of street art, Laugero-Lasserre wanted to have his collection accessible to a wider audience for free, which is why he chose Ecole 42′s democratic environment. Students of the academy volunteer to walk visitors around the museum, which only opens to the public on Tuesdays and Saturdays. To reserve a time to visit and learn more about the collection, head over to Art 42′s website. 2016 Siena International Photography Awards Winners. Trashhand 360-Degree UrbEx Video Skillshare. Uyama Hiroto 'Freeform Jazz' Stream. Vic Mensa Delivers Powerful "16 Shots" Performance on Jimmy Kimmel Live! Nick Fouquet Hatmaking Masterclass. Faig Ahmed Reimagines Carpets as Surreal Masterpieces. Chiharu Shiota's Latest Mass-Scale Installation. Japanese installation artist Chiharu Shiota is primarily known for her large-scale works of art, regularly using yarn to create huge, intricate web networks that could easily be mistaken for some kind of levitating paint.

10 Escapist Albums to Get You Through the Worst Day Ever. Menswear Label Ovadia & Sons Launches Clean SoHo Pop-Up Shop. Thom Browne Opens Surf-Inspired Shop for Pre-SS17 Collection. Summer’s over, but that doesn’t have to mean the vibes are gone. Six girls in a 1-bed flat trying to survive in San Fran. Affordable renting housing is a huge problem across America.

Women in France strike to protest gender pay gap. Women in France yesterday staged a mass workplace walkout in protest against the country’s gender pay gap. The widespread demonstration was organised and further supported by Feminist groups Les Glorieuses, Les Effrontées, and Osez le Féminisme, and saw the movement visualised on social media under the “#7novembre16H34” hashtag – 4.34pm reflects the time women in France effectively start working for free, given the 15.1 per cent disparity between men and women’s wages. The protest took cues from Iceland, which saw thousands join the challenge against the country’s 14 per cent wage gap by walking out of their workplaces and homes at 2.38pm. How do musicians feel about the US election? It’s been a very long, very tiring, and very weird election. Good things have happened, of course: Bernie Sanders helped spearhead a resurgence of socialist thought and shifted the conversation towards income inequality, and it was hard to feel anything but glee seeing ghouls like Ted Cruz, Jeb Bush, and Marco Rubio – men who’d fantasised about being president their entire lives – leave their respective campaigns humiliated and with their reputations destroyed.

Marilyn Manson beheads Trump in NSFW clip for ‘SAY10’ The secret history of mafia-run bootleg fashion. How this election jolted fashion into action. How to be a good friend to someone with depression.