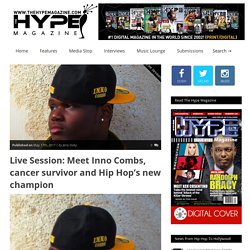 He attended Teague Middle School. From humble beginnings, “Inno” made it his goal to immerse himself in not only hip-hop but in a broad array of musical expression. This is what this young Cancer survivor has accomplished with his craft: Appearance in TREAL’s “Spaceship” music video, “Never back down” (Major Movie) “Ace Ventura 3” (Major Movie) Lil Mama’s (All Access Granted) Live Concert in New York , Performed for Afrika Bambaataa and the Zulu Nation. Power 95.3 Freestyle Friday (March 2017 )U. I’d venture a wager that Inno Combs will be more than a special entertainer, his intestinal fortitude and ability to stay focused is going to be a great benefit for the global music community. Check out his latest single “Lights, Camera, Action.” About the Author. Top 25 Indie Artists on the radio week of May 13 – TheHypeMagazine. BMI’s Catherine Brewton participates in the PowHERful Enrichment Conference – TheHypeMagazine. 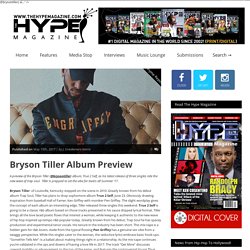 Sneakerwire Harris A preview of the Bryson Tiller (@brysontiller) album, True 2 Self, as his latest release of three singles ride the new wave of trap soul. Tiller is prepped to set the vibe for lovers all Summer ’17. Bryson Tiller of Louisville, Kentucky stepped on the scene in 2010. Pen Griffey pens delectable vocals on the track, Honey, sampling classic 90’s R&B, Christopher Williams, “Every Little Thing U Do.” Tags: #TheHypeMagazine, Bryson Tiller, Honey, R&B, Sneakerwire, trap soul, Young Thug. TheHypeMagazine – News From Hip-Hop To Hollywood! (www.thehypemagazine.com. Who Is: Apollo Night LA ‘Artist of the Week’ StephG? – TheHypeMagazine. Q & As Published on May 15th, 2017 | by Jerry Doby Born Stephan Warren, StephG () this Apollo Night LA () “Artist of the Week” winner moved from his home of Columbus Georgia to Minneapolis Minnesota at an early age with his mother Kimberly Lafayette, in hopes of making a change in their lifestyle and finding better employment opportunities. 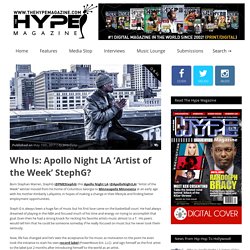 Steph G is always been a huge fan of music but his first love came on the basketball court. He had always dreamed of playing in the NBA and focused much of his time and energy on trying to accomplish that goal. Even then he had a strong knack for reciting his favorite artists music almost to a T. Now, life has changed and he’s sees the acceptance for his music as motivation to the point he even took the initiative to start his own record label (PowerMove Ent. From the outside looking in who is Steph G? Just a regular everyday person chasing after a dream! What brought you to the entertainment Industry? I have always been a huge music fan. Who Is: Apollo Night LA ‘Artist of the Week’ StephG? – TheHypeMagazine. 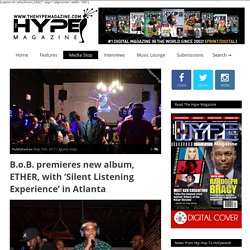 ETHER is B.o.B’s first independent release and latest major project in four years featuring hip-hop’s biggest names including Lil Wayne, Big Krit, Young Dro, Ty Dolla $ign, WurlD, Cee Lo, Young Thug and Usher. Guests enjoyed complimentary cocktails and food by the bite prepared by Celebrity Chef, Kardea Brown as they were immersed into the ETHER world experience through individual wireless headphones courtesy of Silent Events. Listeners previewed the entire 12-track album accompanied with live moderation and remarks from B.o.B. B.o.B. is as usual setting the bar…this is one that will fly all year… ~ JD ETHER is now available on all streaming services and available for purchase in the iTunes store.

DJ Khaled & Friends added to massive BET Experience lineup – TheHypeMagazine. Happenings Published on May 15th, 2017 | by Jerry Doby 2017 BET Experience () looks to be one for the books with addition of DJ Khaled () & Friends to the official festivities. 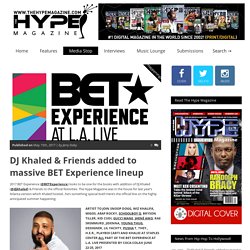 The Hype Magazine was in the house for last year’s Atlanta version which Khaled hosted…he’s something special live!!! Here’s the official line on the highly anticipated summer happening: The stellar four-day event will showcase the best in music and live entertainment. Maserati Skrill ‘Reasons’ – TheHypeMagazine. New Book: ‘How Autism is Reshaping Special Education: The Unbundling of IDEA’ – TheHypeMagazine.

Media Stop Published on May 15th, 2017 | by Jerry Doby The Future Is Now: There’s no question that a new presidency and appointment to the role of Secretary of Education has the future of education in the United States top of mind. 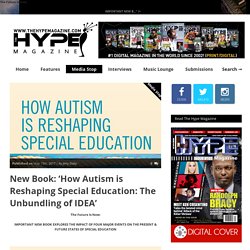 With 1 in 45 children diagnosed with an autism spectrum disorder according to a recent government survey, the growing concern and discussion surrounding these disorders, and their significant impact on the special education system, is likely to be key when it comes to discussions about reform. But these latest events aren’t the only ones to make a big mark: there are four major, recent events that have transpired since the last reauthorization of the Individuals with Disabilities Education Act (IDEA) that will have a substantial effect on the next iteration of the federal law. Thorough, fascinating, and timely, How Autism Is Reshaping Special Education addresses:

Live Session Dean Erica Muhl of the USC Iovine and Young Academy – TheHypeMagazine. Live Sessions Published on May 12th, 2017 | by Jerry Doby Ok, so just how do you pitch the dynamic duo of Dr. 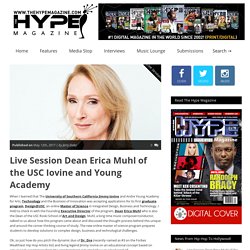 Dre (recently named as #3 on the Forbes Wealthiest Hip Hop Artists list) and living legend Jimmy Iovine on an educational concept based on actual work experiences from the entertainment industry? She just asked; kind of! The graduate program is the logical follow-on to the undergrad course of study which touches on and preps students to do what it seems global governments have major trouble figuring out; cooperation and collaboration.

I’d like to comment that, all successful undertakings are successful by design…not art, pictures or lines, but a crafting of a plan by which all the necessary pieces will fall into place. Initially, this was going to be a magnificent editorial piece with a bunch of my interpretations and understandings, blah blah blah, Ad nauseam however, as I listened once again to my conversation with Dean Muhl, that went totally out of the window. About the Author. Stevie Stone Announces New Album “Level Up” Out June 2 – TheHypeMagazine. Rhyme Report Published on May 9th, 2017 | by Just Jay Stevie Stone () has partnered with the biggest producers of his career for his forthcoming Level Up album. 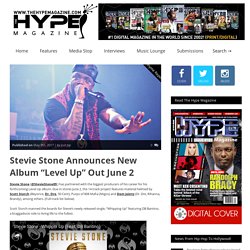 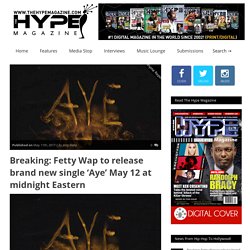 It’s the first glimpse of his forthcoming second full-length album and what he promises to be one of the year’s biggest hip-hop releases, King Zoo– coming soon. Pre-save “Aye” on Spotify to be the first to hear it on release day. DJ Ykcor Club Madness: ‘Jersey vs Baltimore’ – TheHypeMagazine. Meet kCAne MarkCO The Midwest Juggernaut – TheHypeMagazine. Review: Max Priest ‘Bruce Lee #WYSO’ (Prod by Caviar) – TheHypeMagazine. Music Reviews Published on May 9th, 2017 | by Jerry Doby I ran across this Max Priest () “Bruce Lee #WYSO” joint sliding through social media and ran across this pinned tweet on One West Radio () so I decided to punch in and check it…I didn’t look at the date (4/20) and there was no producer credit in the title BUT, some sonic signatures you just know, no matter how long a time span goes by. 4 bars in, I was on the keyboard West Coast music innovator Caviar () of The Secret Specialist asking him “Is this you on the track?” 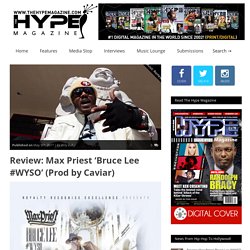 The magical producer/composer always has a funky presence on his tracks which resonates with the sonic Hip Hop history of an entire coast…region actually. Before he could actually answer my text (which did within a few moments), I pushed more info and my bones were right that vibe was the man Cavie doing hit thing. #Throwback Tags: #TheHypeMagazine, #WYSO, Bruce Lee, Caviar, DMX, Macy Gray, Max Priest, Secret Specialist, The Hype Magazine About the Author. Norman Lear removes the power from the ‘N-word’ on his new podcast – TheHypeMagazine. Media Stop Published on May 8th, 2017 | by Jerry Doby In this week’s episode of Norman Lear’s new podcast, All of the Above on PodcastOne, he delivers his iconic brand of activism in a conversation about race relations with The Carmichael Show creator, actor, writer and comedian Jerrod Carmichael.

Also discussed are Jerrod’s approach to stand-up comedy, the significance of starting conversations for social progression and creating art that keeps you alert, along with politics, past and present. The episode is available now on PodcastOne.com, the PodcastOne app and Apple Podcasts. It was recently revealed that Carmichael would be incorporating the “n-word” into his network sitcom. Below is an excerpt from the podcast: Fox TV’s ‘Shots Fired’ is THE trending topic during viewing events on TWO coasts – TheHypeMagazine.

Happenings Published on May 6th, 2017 | by Jerry Doby The Shots Fired music team made sure The Hype Magazine was present during both events with live broadcasts in from the Los Angeles happening via its channel on Periscope.TV. Courtesy of Paragon Music Films music’s takeover of the brand’s channel; viewers got live looks behind the scenes and viewed exclusive “Live Session” segments with Shots Fired cast, crew and performers; Ruff Endz, Mack Wilds and Katlyn Nichol. Highlight Clips from the evening. ‘The Shadow Effect’-Interview with director Amariah Olson – TheHypeMagazine. Q & As Published on May 5th, 2017 | by Jae Monique “The Shadow Effect” focuses Dr. Reese (Jonathan Rhys Meyers), who is obsessed with gene regeneration, and enthralled by the phenomenon of the waking dream.

Dr. Japanese-Haiwaiian emcee, Chiemi brings back Old School with Her new Video – TheHypeMagazine. Rhyme Report Published on May 5th, 2017 | by Essince Bay-area emcee, Chiemi touches on her inner Doodle-Bug in her new video “Wrek Ya Style”. When I first watched the video it gave me that “Cool Like That” vibe complete with finger snaps and her spoken-word style delivery. The single touches on the struggles of a young woman finding her way through an overly aggressive rap environment, and speaks to all the young women seeking to have a voice in a male dominated society. Quincy D. Jones III talks new Netflix documentary ‘Feel Rich: Health Is The New Wealth’ – TheHypeMagazine. Live Sessions Published on May 4th, 2017 | by Jerry Doby The Hype Magazine “Live Session” with 40x platinum recording producer, Quincy D.

“Shots Fired” is the small screen version of what some used to consider “Just another Hip Hop story.” Some folks need visuals to get the message and the Emmy nominated series is the perfect vehicle. Weekly, the music team for the FOX TV special event series led by veteran music supervisors Jabari Ali and John Houlihan () feature a joint that’s key to the story. In a phone conversation today May 3, 2017, Ali indicated this week’s song debut of “Speak To My Heart” performed by Ruff Endz, ft. Jhené Aiko and Big Sean celebrate the launch of the Teva x Jhené Aiko collection at NeueHouse in L.A. – TheHypeMagazine. <img width="600" height="900" src=" class="attachment-large size-large" alt="" srcset=" 600w, 200w" sizes="(max-width: 600px) 100vw, 600px" />Singer Jhene Aiko at the launch of the 2017 Teva x Jhene Aiko Collection at NeueHouse Los Angeles on May 1, 2017 in Hollywood, California.