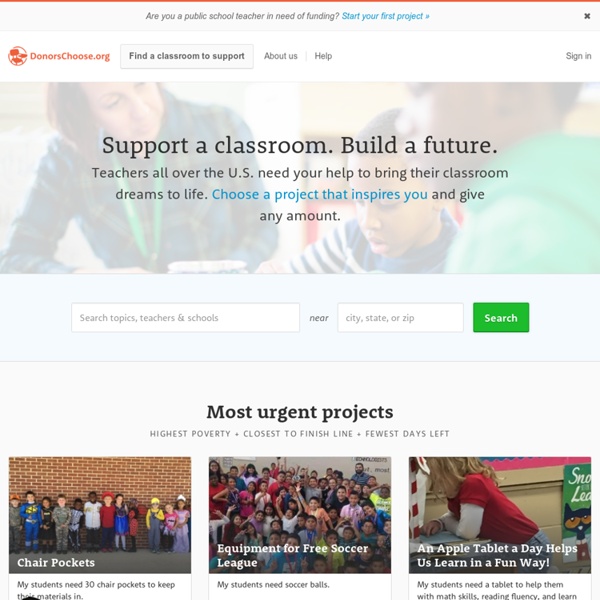 50 Fundraising Ideas Creative and Easy Ways to Raise Money for Your Organization Often, the most challenging part of fundraising is coming up with a creative idea that will motivate the troops. Since the best idea is often found in having a lot of them, you’ll be off to a great start with your next fundraiser with these 50 easy fundraising ideas. 1. Choose the Torture – Have donors pay $1 a vote to decide which form of “torture” to inflict on your organization’s leader (i.e. dye hair, dress as a clown, trade a job for a day). 2. Bingo Is Its Name-O – Get prizes donated and charge an entrance fee. 3.

Salman Khan (educator) Salman Amin "Sal" Khan[2] is a Bangladeshi American[3] educator, entrepreneur, and former hedge fund analyst. He is the founder of the Khan Academy, a free online education platform and nonprofit organization. From a small office in his home, Khan has produced more than 4,800 video lessons teaching a wide spectrum of academic subjects, mainly focusing on mathematics and the sciences.[4] Salman Khan was born and raised in Metairie, Louisiana.[8] His mother was born in Calcutta, India and his father was born in Barisal, Bangladesh.[3] What Does "Technology Integration" Mean? One reason why I love blogging is the chance to get a variety of responses to my ideas and thoughts. A reader of my last post commented: "This article describes how to help children learn to use an unfamiliar computer program.

Piggybackr Are you a parent, teacher, or student looking for new fundraising ideas for your school? Are you tired of bake sales, Krispy Kreme fundraisers, and car washes? See examples of how students in all 50 states have used crowdfunding to make money for their schools! Pilot program at New Carrollton middle school teaches teachers to integrate tech Jamie Anfenson-Comeau/The Gazette Charles Carroll Middle School seventh-graders Genesis Ramos, Yoselin Garcia and Charlsy Nyam use their iPads and MacBooks to work on a project for their seventh-grade honors science class. The headline on this article was corrected on April 25, 2014. An explanation follows the story. Charles Carroll Middle School students are learning about bodily systems’ internal balance via a theoretical “zombie apocalypse.” “If a person gets bitten by a zombie, it spreads,” said Yoselin Garcia, 13, of New Carrollton.

Stephen Covey Stephen Richards Covey (October 24, 1932 – July 16, 2012) was an American educator, author, businessman, and keynote speaker. His most popular book was The Seven Habits of Highly Effective People. His other books include First Things First, Principle-Centered Leadership, The Seven Habits of Highly Effective Families, The 8th Habit, and The Leader In Me — How Schools and Parents Around the World Are Inspiring Greatness, One Child at a Time. He was a professor at the Jon M.

Gaby Rodriguez, Toppenish High School, Fakes 6-Month Pregnancy For Senior Project TOPPENISH, Wash. — When Gaby Rodriguez took off her fake baby belly and revealed to her classmates that for months they had been part of an elaborate social experiment, she did more than force members of her community to examine how they treat pregnant teens – she got the attention of the nation. The Yakima Herald-Republic detailed the experience of the 17-year-old Rodriguez in a story Wednesday that caught the attention of shows like "Good Morning America" and resonated with viewers of popular teen mom reality shows. School officials said they and Rodriguez would have no more comment until she returns from a class trip next week. But her action thrust her into a growing conversation. The profile of teen moms has changed in recent years.

Profitable Software Affiliate Programs Software has the highest margins in the Affiliate Industry Receive commissions up to 85 % for each purchase made by customers referred through a link or banner on your website through our affiliate programs It's added value to your website content Ever growing market and customer demand To join our software affiliate programs, first you need to sign-up. Five-Minute Film Festival: 9 Ways to Raise Money for Your Class Online Move over, bake sales. It's a brand new year, and time to start thinking big about how to use the Web to fund new projects or get gear for your classroom. Edutopia has just released an amazingly useful downloadable guide to crowdfunding, and to dovetail with that, I've collected nine ideas for how to raise money online and follow those classroom dreams. If, like many teachers, you have great ideas but no resources to carry them out, then this list will be a jackpot for you -- the season of giving and generosity might not be over yet!

The War Against Teachers as Public Intellectuals in Dark Times (Image: Students in class via Shutterstock)Please support Truthout’s work by making a tax-deductible donation: click here to contribute. A little learning is a dangerous thing. - Alexander Pope The tragic deaths of 26 people shot and killed at Sandy Hook Elementary School in Newtown, Conn., included 20 young children and six educators. Many more children might have been killed or injured had it not been for the brave and decisive actions of the teachers in the school. Teacher Magazine: Community Forums I think the question here is less about whether or not master's degrees have a strict causal effect on teaching and learning and more about whether or not public schools should have lock-step pay increases (for seniority or degrees earned). Or, lockstep teaching assignments (5 or 6 classes with a prep, a study hall, and a 25 minute lunch). If I, as a teacher, can make a strong case that my degree in nursing will help students - for example, by creating an interdisciplinary courses that combine my practical medical knowledge with fields of biology and mathematic, or ethics and literature - why should I not be compensated for that?

Your Favorite RC Blog RC helicopter or rc airplanes ? this has always been a good and important question especially for beginners. i myself live rc helicopter much better than rc airplanes, not for anything else, but i don’t have much time to drive out of the town to find a place to play an airplane, i’d rather staying at home, flying indoor, doing some bit hover, make some crashes, it will never hurt anything except a cat once, and the wall sometimes. Basically rc helicopters is more difficult to control, more flexiable and react promptly to orders, so you need to concentrate on it when you are playing. rc airplanes is relatively easier to control, it’s usually bigger in size though. And to diy an airplane will be much of fun, i have a plan of building a big one when i’m retired.