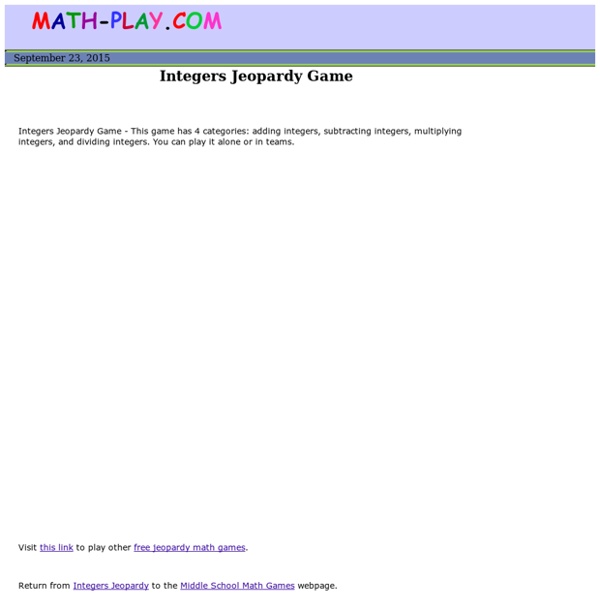 Connect Three In this game the winner is the first to complete a row of three, either horizontally, vertically or diagonally. Roll the dice (one with the numbers 1, 2, 3, -4, -5, -6 and the other with the numbers -1, -2, -3, 4, 5, 6), place each dice in one of the squares and decide whether you want to add or subtract to produce one of the totals shown on the board. Your total will then be covered with a counter. You cannot cover a number which has already been covered. The winner is the first to complete a line of three. You can use the interactive version below or print this board to play away from the computer. Full Screen Version

Adding and Subtracting Positive and Negative Numbers This article is an expanded version of one published on NRICH in 2008. The original article is contained within this version. We are often frustrated when we hear students say "Two minuses make a plus", because it shows a rote-learned phrase that is often misapplied. For example, we have all heard students say things like "minus four minus two equals six, because two minuses make a plus!" The models for teaching addition and subtraction of positive and negative numbers that we share in this article are designed to lead to understanding. There are four possibilities that we need to be able to understand with our models: Adding a positive number Adding a negative number Subtracting a positive number Subtracting a negative number Hot Air Balloon The first model we offer is the hot air balloon, as seen in the game Up, Down, Flying Around.In this model, we represent positive numbers as 'puffs' of hot air, and negative numbers as sandbags. My balloon starts at height +4. Let this be 4 and this