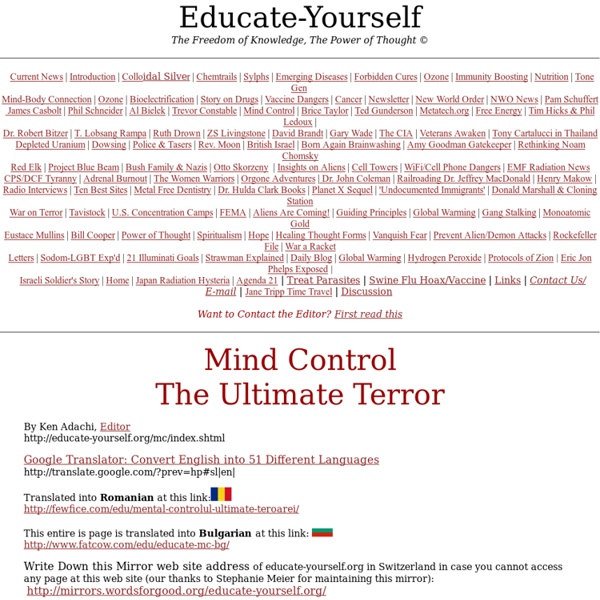 Electromagnetic Frequency Mind Control Weapons Jeff Rense & Dr. Patrick Flanagan (Video) ForbiddenKnowledgeTV Alexandra Bruce November 23, 2014Jeff Rense interviews Dr. Patrick Flanigan. Topics discussed are mind control and social engineering, Smart Meters, microwave weapons, GWEN, electromagnetic wave pulses, cell phone radiation, The “Lilly wave”, and more. About Dr. Mind Control Theories and Techniques used by Mass Medias Mass media is the most powerful tool used by the ruling class to manipulate the masses. It shapes and molds opinions and attitudes and defines what is normal and acceptable. This article looks at the workings of mass media through the theories of its major thinkers, its power structure and the techniques it uses, in order to understand its true role in society.

Dr. Ewen Cameron and psychiatric mind control Jon RappoportActivist Post “It’s important to understand that the professionals who put the most emphasis on the brain as the source of consciousness are also the people who drug it, sedate it, coerce it, and try to control it. They’re going mad trying to reduce life to purely physical terms. The World of Mind Control Through the Eyes of an Artist with 13 Alter Personas Kim Noble is a rare occurrence: a trauma-based mind control survivor with over 13 alter personas who don’t know each other but who all paint. She has suffered DID and MPD (dissociative identity disorder and multiple personality disorder) for most of her life, as a result of an extremely traumatic childhood. Each one of her alters paints with a personal and distinctive style but they all have one thing in common: they reveal the dark world of mind control programming, from its horrific techniques to its symbolism.

Pupillometry – The Cutting Edge of Mind Control Buck RogersActivist Post Big brother is here, and he has some shocking new technologies up his sleeve that give him unprecedented access to your thoughts, feelings and intentions. Mind control is more sophisticated than ever, and you may not even be aware that your eyes are giving high-tech intruders access to your mind. "They Live", the Weird Movie With a Powerful Message ‘They Live’ is a science-fiction movie from the Eighties that features aliens, a WWF wrestler and a whole lot of sunglasses. What’s not to like? While, at first glance, the movie appears to be a bunch of nonsense, ‘They Live’ actually communicates a powerful message about the elite and its use of mass media to control the masses.

Mind control: the Pentagon mission to program the brain Jon RappoportActivist Post “Since the dawn of time, the most powerful groups in every society have practiced forms of mind control on populations. They determined it was necessary. Eventually, they decided it was their most important job. The Order of the Illuminati: Its Origins, Its Methods and Its Influence on the World Events The Order of the Illuminati is often at the center of debates about the impact of secret societies on human history. Is the Illuminati a myth or does it truly secretly rule the world? As the number of people asking that question has grown, facts about the Order have become diluted with misconceptions and disinformation, making objective research on the subject difficult. This article attempts to shed some factual light on the Order of the Illuminati by reviewing some of the most important documents on the subject.

CIA mind-control program: not gone, not forgotten Jon RappoportActivist Post Follow me on a few twists and turns down the rabbit hole. Start with this untitled June 27, 1994, document, stored at the National Security Archive at The George Washington University. Origins and Techniques of Monarch Mind Control Monarch Programming is a method of mind control used by numerous organizations for covert purposes. It is a continuation of project MK-ULTRA, a mind-control program developed by the CIA, and tested on the military and civilians. The methods are astonishingly sadistic (its entire purpose is to traumatize the victim) and the expected results are horrifying: The creation of a mind-controlled slave who can be triggered at anytime to perform any action required by the handler.

The Covert Operations for Human Mind Control Catherine J. FrompovichActivist Post Readers probably are familiar with the colloquialism, “Money is the root of all evil.” Well, that ought to be set aside, if not abandoned totally, for the new—and insanely insidious—root of all evil, mind control technology! Roseanne Barr: "MK ULTRA Mind Control Rules in Hollywood" Roseanne Barr is an outspoken actress and comedienne who never shied away from tackling difficult and controversial issues, even if that meant being unpopular or being tagged as “crazy” by mass media. While I can’t say that I agree with all of her views, she remains one of the very few people in Hollywood who dare talking about its most damning issue: MK ULTRA. In a recent interview with RT, Roseanne talked about the dark side of the entertainment industry and directly mentioned MK ULTRA as being a major force in Hollywood. Here’s the interview (it is set up to start at the part about the entertainment industry).

How To Control Someone Else’s Arm With Your Brain Neuroscientist and TED Senior Fellow, Greg Gage, is on a mission to make brain science accessible to all. In this fun, kind of creepy demo, Gage uses a simple, inexpensive DIY kit to take away the free will of an audience member. It’s not a parlor trick; it actually works.