In the 1950s the CIA Sprayed a French Town With LSD, Here’s What Happened. In 1951, a French village suddenly became plagued with hallucinations and mass insanity. 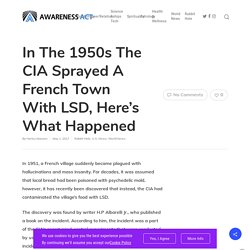 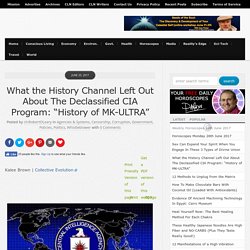 To my surprise, the History Channel was shockingly honest about the CIA’s involvement in the war on drugs and the massive political propaganda campaigns that went along with it. Mind Control Experiments, CIA Hypnosis, Sex Abuse. Dear friends, Tragic, heartbreaking mass murders in recent years have spread fear and panic among the general public. 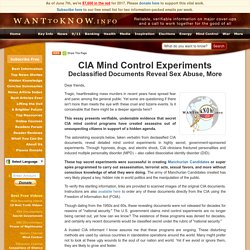 Yet some are questioning if there isn't more than meets the eye with these cruel and bizarre events. Is it conceivable that there might be a deeper agenda here? This essay presents verifiable, undeniable evidence that secret CIA mind control programs have created assassins out of unsuspecting citizens in support of a hidden agenda. The astonishing excerpts below, taken verbatim from declassified CIA documents, reveal detailed mind control experiments in highly secret, government-sponsored experiments. Science Against the People - the story of JASON. This booklet was written in 1972, in the midst of domestic protests against the US' war in Vietnam, and this copy for the web was made by C.S. in 2002. 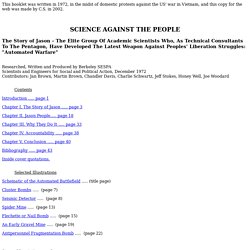 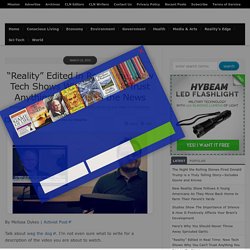 I’m not even sure what to write for a description of the video you are about to watch. The Illuminati Formula Used to C. [back] a book by Fritz Springmeier & Cisco Wheeler [Book in chapters] Dedication This book is dedicated to the two million Americans and counting who have been programmed with Monarch-type trauma-based mind control. 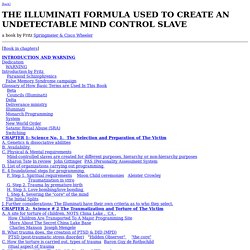 This book is written to destroy trauma-based mind control before it destroys the human race. It’s time for this horrendous secret to end. It is also written as part of God’s end time work to propel people of faith to the high calling that is prophesied of the Body, but cannot be attained without men of faith understanding these things. Media Manipulation of 9/11 Truth. © GoShorty.net In February 2003, a Florida Court of Appeals unanimously ruled for Fox News, saying no rule or law prohibits distorting or falsifying news. 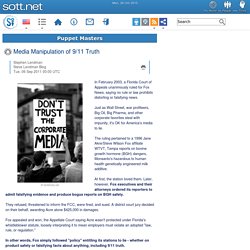 The CIA: long-range planning for a drugged and debilitated society. Recent Hollywood Movie Reveals Mind Control Technologies Designed to Depopulate the Planet. (Before It's News) During a commercial break on The Common Sense Show in February of 2015, Deborah Tavares told me that I really should go see the move, The Kingsman, because there are so many elements present in this movie which show us where so much of our technology is headed. 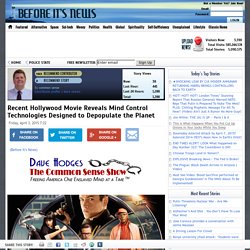 The Plot Gary “Eggsy” Unwin (Taron Egerton), whose late father secretly worked for a spy organization, lives in a South London housing estate and seems headed for a life behind bars. However, dapper agent Harry Hart (Colin Firth) recognizes potential in the youth and recruits him to be a trainee in the secret service.

Origins and Techniques of Monarch Mind Control. Monarch Programming is a method of mind control used by numerous organizations for covert purposes. 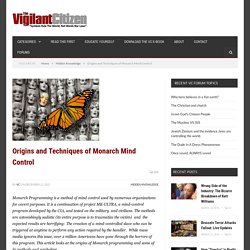 It is a continuation of project MK-ULTRA, a mind-control program developed by the CIA, and tested on the military and civilians. The methods are astonishingly sadistic (its entire purpose is to traumatize the victim) and the expected results are horrifying: The creation of a mind-controlled slave who can be triggered at anytime to perform any action required by the handler. While mass media ignores this issue, over 2 million Americans have gone through the horrors of this program.

This article looks at the origins of Monarch programming and some of its methods and symbolism. NOTE: This article contains disturbing elements and might trigger Monarch survivors. Monarch programming is a mind-control technique comprising elements of Satanic Ritual Abuse (SRA) and Multiple Personality Disorder (MPD). The Dark Nexus of Mind Control and Artificial Intelligence. Jay Dyer, GuestWaking Times In researching the MK ULTRA programs and their various offshoots, I came across an interesting connection to the coming SmartGrid. 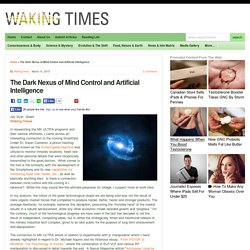 Under Dr. Ewan Cameron, a prison tracking device known as the Schwitzgebel Machine was utilized to monitor inmates locations, heart rate and other personal details that were reciprocally transmitted to the good doctors. Real LAPD Mind Controlled Targeted Individual Tells Techno Hell Secrets. (Before It's News) By Deborah Dupré BIN Exclusive Nicholas West’s shocking new article, Wireless Microchip Implant Set For Human Trials reveals only the tip of today’s mind control iceberg, according to a Targeted Individual, who reached out to reporter Deborah Dupré this week, and an Australian surveillance expert, both in exclusive Before It’s News interviews over the past week.

Reporters exposing microchips miss the most disturbing finding of all, that millions of people have already been covertly microchipped without consent and worse, according to surveillance issues expert Paul Baird. These millions are subjects of a U.S. mind control program that reporters repeatedly refer to as a future horror, rather than hell on Earth reported daily to Dupré by targeted individuals, such as Sean Alexander Alizada. “Over a year ago, I moved from my hometown in Michigan to California for better job opportunities and weather. CIA, US, Canadians Torturing, Murdering Children To Develop Super Spies? (Before It's News) Air Force personnel massacred 13 children on May 17 1958 according to a lone survivor of a suspected genocide by Royal Canadian Air Force personnel. The homicides were said to take place as the Canadian government closed their MKULTRA mind control program. Last week the witness, now in her mid-sixties, gave heart-wrenching details about child genocides during hearings at the International Common Law Court of Justice in Brussels.

She also discussed her eyewitness to murders of seven other children during her two year childhood stint at the base as a victim of the CIA-funded mind control program to develop “Super Spies.”