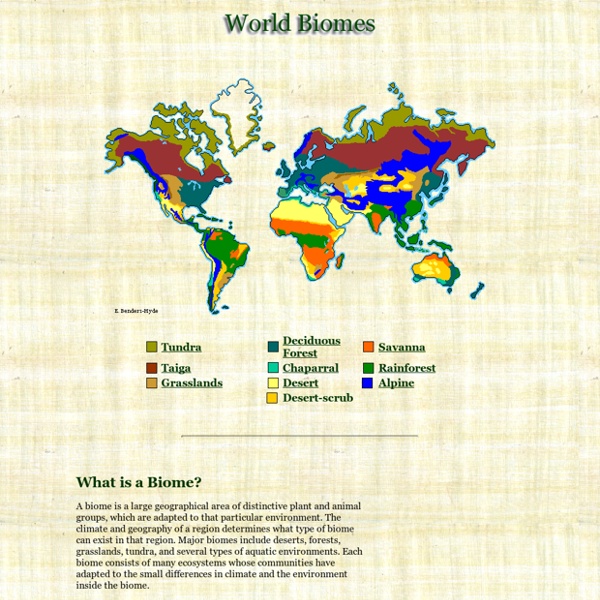 What is a Biome? A biome is a large geographical area of distinctive plant and animal groups, which are adapted to that particular environment. The climate and geography of a region determines what type of biome can exist in that region. Major biomes include deserts, forests, grasslands, tundra, and several types of aquatic environments. Each biome consists of many ecosystems whose communities have adapted to the small differences in climate and the environment inside the biome. All living things are closely related to their environment. The earth includes a huge variety of living things, from complex plants and animals to very simple, one-celled organisms.

Rainforests Facts Facts about Rainforests Do you know how many tropical rainforest plants have been identified as having anti-cancer properties? Or how many continents around the world contain rainforests? And just how quickly are the world's rainforests disappearing? Savanna Biomes A savanna is a rolling grassland scattered with shrubs and isolated trees, which can be found between a tropical rainforest and desert biome. Not enough rain falls on a savanna to support forests. Savannas are also known as tropical grasslands. They are found in a wide band on either side of the equator on the edges of tropical rainforests. Savannas have warm temperature year round. There are actually two very different seasons in a savanna; a very long dry season (winter), and a very wet season (summer).

Lake (Pond) Biome These regions range in size from just a few square meters to thousands of square kilometers. Scattered throughout the earth, several are remnants from the Pleistocene glaciation. Many ponds are seasonal, lasting just a couple of months (such as sessile pools) while lakes may exist for hundreds of years or more. Garst Wildlife Photos Grasslands are found on every continent, although they are named because of their dominant vegetation of grasses, bushes and scattered trees are also part of grassland habitats. There are a variety of other names for the grassland, which can be distinguished by continent in which they are found. In North America grasslands are also termed "plains" or "prairies;" whereas in Asia they are called "steppes;" South America called "pampas," "llanos," or cerrados;" in Africa called "savannas" or "velds;" and in Australia termed "rangelands."

Boy finds 10,000-year-old arrowhead on New Jersey beach Noah Cordle, 10, found a 10,000-year-old Paleoindian arrow point on a New Jersey beach.Kelly-Jane Cotter/ Asbury Park Press BEACH HAVEN, N.J. – A boy playing on a New Jersey beach has unearthed a 10,000-year-old arrowhead possibly used by ancient Native Americans to spear fish or hunt mastodon. Noah Cordle, 10, and his family were vacationing on the Long Beach Island last week when he found it at the edge of the surf in the community of Beach Haven. It was sharp enough that it hurt as it hit his leg. Endangered Rainforest Animals Animals are categorized under endangered species if they are at risk of becoming extinct either because of their few numbers or due to the change in the environmental condition. As per the International Union for Conservation of Nature and Natural Resources (IUCN) data, about 40 percent of the total organisms are on the verge of extinction in the near future. In 1963, the IUCN created the Red Data List of more than 15,500 species, after evaluating the extinction risk of various species and subspecies worldwide. This list is also known as IUCN Red List of Threatened Species or IUCN Red List. Among the many ecosystems, rainforests are those forest areas that are characterized by heavy rainfall (1750 - 2000 mm).

Savanna Typical tropical savanna in Northern Australia demonstrating the high tree density and regular spacing characteristic of many savannas. Savannas are also characterized by seasonal water availability, with the majority of rainfall confined to one season. Savannas are associated with several types of biomes. Savannas are frequently in a transitional zone between forest and desert or grassland. Savanna covers approximately 20% of the Earth's land area.

Coral Reef Biome If you're looking for the most biodiverse habitats, forget the rainforests. Many biologists consider coral reefs to be more diverse and productive than their land equivalents. Corals are the only animals other than humans that are capable of building structures that can be seen by space. The Great Barrier Reef for instance is constructed from small coral polyps that together form a nearly 2000 mile long barrier reef.

Grassland Grasslands are areas where the vegetation is dominated by grasses (Poaceae), however sedge (Cyperaceae) and rush (Juncaceae) families can also be found. Grasslands occur naturally on all continents except Antarctica. Grasslands are found in most ecoregions of the Earth. For example there are five terrestrial ecoregion classifications (subdivisions) of the temperate grasslands, savannas, and shrublands biome ('ecosystem'), which is one of eight terrestrial ecozones of the Earth's surface. Vegetation Grassland vegetation can vary in height from very short, as in chalk where the vegetation may be less than 30 cm (12 in) high, to quite tall, as in the case of North American tallgrass prairie, South American grasslands and African savanna.

Before Civilization - Ancient Civilizations for Kids Early humans showed another major sign of intelligence about 35,000 years ago. Humans began to draw on the walls of caves—probably other places too, but it has been preserved in caves. Cave paintings often depict hunting scenes. This is some of the first artwork and also an early attempt at written communication. Development of Agriculture The most important development in human history is the development agriculture, which is another word for farming.