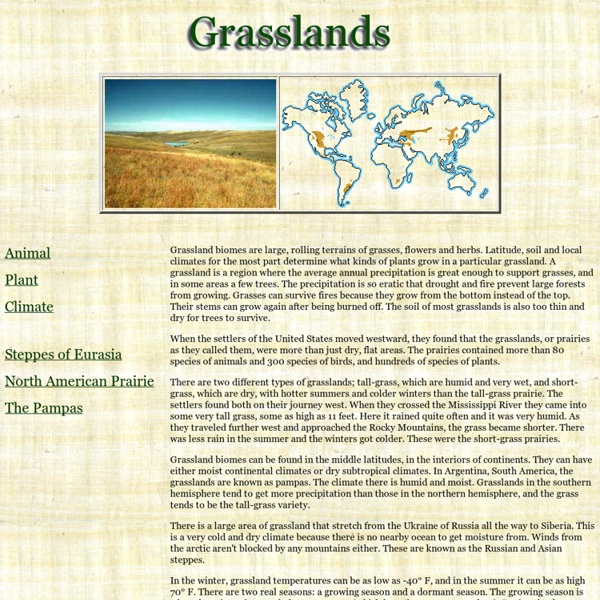 Grassland biomes are large, rolling terrains of grasses, flowers and herbs. Latitude, soil and local climates for the most part determine what kinds of plants grow in a particular grassland. A grassland is a region where the average annual precipitation is great enough to support grasses, and in some areas a few trees. The precipitation is so eratic that drought and fire prevent large forests from growing. Grasses can survive fires because they grow from the bottom instead of the top. Their stems can grow again after being burned off. When the settlers of the United States moved westward, they found that the grasslands, or prairies as they called them, were more than just dry, flat areas. There are two different types of grasslands; tall-grass, which are humid and very wet, and short-grass, which are dry, with hotter summers and colder winters than the tall-grass prairie. Grassland biomes can be found in the middle latitudes, in the interiors of continents. by Sam M. 2000 Bibliography:

Grasslands Threats, Wetlands Threats - National Geographic A quarter of Earth was once covered by grasslands, but much of these have now been turned into farms. This has resulted in a widespread loss of wildlife habitat. Grassland soil is rich, and almost anything can be grown there. But poor agricultural practices can ruin soil and turn grassland into lifeless, barren spaces. If crops are not rotated properly, nutrients in the soil are stripped out, and nothing can be grown for several years. Compared to grassland, cropland provides few or no resources for breeding birds. Threats Solutions Continue education efforts on how to protect the soil and prevent soil erosion.Protect and restore wetlands, which are an important part of grassland ecology.Rotate agricultural crops to prevent the sapping of nutrients.Plant trees as windbreaks.Conduct dry season burning to obtain fresh growth and to restore calcium to the soil that builds up in the dry grasses.

Grasslands Grasslands go by many names. In the U.S. Midwest, they're known as prairies. In South America, they're called pampas. Central Eurasian grasslands are referred to as steppes, while in Africa they're named savannas. What they all have in common is grass as their naturally dominant vegetation. In fact, most grasslands are located between forests and deserts. There are two different kinds of grasslands: tropical and temperate. Tropical grasslands are warm year round, but usually have a dry and a rainy season. Temperate grasslands, which average between 10 and 30 inches (25 and 75 centimeters) of rain per year, have shorter grasses, sometimes just a few millimeters. The animals that live in temperate grasslands have adapted to the dry, windy conditions. When rainy season arrives, many grasslands become coated with flowers, some of which can survive well into winter with the help of underground storage organs and thick stem bases.

sweet clovers Global Warming May Lower Grassland Quality -- ScienceDaily Rising atmospheric carbon dioxide (CO2) concentrations and air temperatures may lead to an increase in plant production, but a gradual decline in soil carbon and nitrogen. That's according to study findings reported by Agricultural Research Service (ARS) and Colorado State University (CSU) scientists in the April issue of New Phytologist. The findings were the result of combined modeling and experimental exercises that explored the impacts of both warming and rising atmospheric CO2 on the ecology of native Great Plains grasslands. Plant physiologist Jack A. The modeling experiment exercise was designed to test the responses from a new experiment just begun in southern Wyoming, the Prairie Heating and CO2 Enrichment, or PHACE study. The scientists tailored an ecosystem model at the PHACE experiment site—based on the earlier experimental results—to help them investigate the effects of changes in climate and atmospheric CO2 in relation to carbon and nitrogen cycling.

cone flower Downland Views flower KDE Santa Barbara Location | Weather | Plants | Animals | People | Links LOCATION: The name for this biome, temperate grasslands, is a great description for what it is like here. WEATHER: Temperatures in this biome vary greatly between summer and winter. PLANTS: Grasses dominate temperate grasslands. ANIMALS: All grasslands share a lack of shelter from predators, and an abundance of grass for food; therefore, grassland animal populations are similar throughout the world. PEOPLE AND THE TEMPERATE GRASSLAND: One of the main environmental concerns regarding temperate grasslands is the conversion of grassland to farmland. The Grassland Biome Geography for Kids: Grassland Biomes Grassland Explorer Blue Planet Biomes: Grasslands Prairies in the Prairie State What’s it like where you live? Back to Biomes Index

Grasslands impacts > ecosystems > Grasslands are the most endangered habitat in Manitoba. Less than 1% of Manitoba’s original 6,000 square kilometers of tall-grass prairie remain. Climate change may expand existing grasslands as the average global temperature climbs. But will it help or hinder the plants and animals that call these rare habitats home? General Circulation Models (complex computer programs that predict changes in Earth’s climate) predict a variety of climate impacts for southern Manitoba as greenhouse gases trap more heat in the atmosphere. These impacts include: higher summer temperatures increased rates of evaporation less summer rain decreased soil moisture an increase in the frequency and severity of droughts These combined impacts are projected to press the southern boundary of the boreal forest north between 150 and 200 km. top of page Wetlands Among the hardest hit will be those species that rely on prairie wetlands. Wildlife The fate of other animals is more difficult pinpoint.