First humans: Homo sapiens & early human migration (article) Ancient Man Had Neanderthal Great-Great Grandfather. A modern human who lived in what is now Romania between 37,000 and 42,000 years ago had at least one Neanderthal ancestor as little as four generations back—which is to say, a great-great-grandparent. 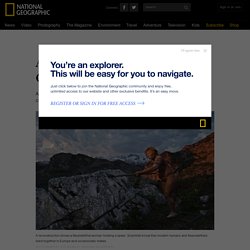 Scientists have known for at least half a decade that living humans bear traces of Neanderthal blood—or more specifically, Neanderthal DNA. Just when and where our ancestors bred with their now-extinct cousins, however, has been tricky to pin down until now. A new study published Monday in the journal Nature has the highest percentage of Neanderthal DNA of any modern human ever studied. “I could hardly believe that we were lucky enough to hit upon an individual like this,” says study co-author Svante Pääbo of the Max Planck Institute for Evolutionary Anthropology in Leipzig. The specimen, known as Oase 1, consists only of a male jawbone, and from the moment it was discovered in 2002 its shape suggested that it might belong to a hybrid between Homo sapiens and Neanderthal. 6766314-3x2-940x627.jpg (JPEG Image, 940 × 627 pixels)

Incredible Human Journey - Out of Africa 1/5 HD. Dawn of Humanity. Before Civilization - Ancient Civilizations for Kids. Early humans showed another major sign of intelligence about 35,000 years ago. 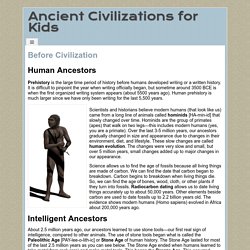 Humans began to draw on the walls of caves—probably other places too, but it has been preserved in caves. Cave paintings often depict hunting scenes. This is some of the first artwork and also an early attempt at written communication. Development of Agriculture The most important development in human history is the development agriculture, which is another word for farming. Corn is a good example of domestication. Humans have lived in Africa longer than anywhere else, but many African societies adopted farming much later than other parts of the world. The soil near rivers is very fertile—or full of plant food and good for growing. Agriculture Brings Changes Farming had other effects on lifestyle and society. The society that farming created forced people to interact in new ways.

The world was rapidly changing and people finally had time to settle down and think about the world around them. Blue Planet Biomes - World Biomes. What is a Biome?

A biome is a large geographical area of distinctive plant and animal groups, which are adapted to that particular environment. The climate and geography of a region determines what type of biome can exist in that region. Major biomes include deserts, forests, grasslands, tundra, and several types of aquatic environments. Each biome consists of many ecosystems whose communities have adapted to the small differences in climate and the environment inside the biome. All living things are closely related to their environment. The earth includes a huge variety of living things, from complex plants and animals to very simple, one-celled organisms. Human Evolution Timeline. Boy finds 10,000-year-old arrowhead on New Jersey beach. Noah Cordle, 10, found a 10,000-year-old Paleoindian arrow point on a New Jersey beach.Kelly-Jane Cotter/ Asbury Park Press BEACH HAVEN, N.J. – A boy playing on a New Jersey beach has unearthed a 10,000-year-old arrowhead possibly used by ancient Native Americans to spear fish or hunt mastodon. 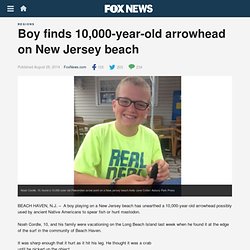 Noah Cordle, 10, and his family were vacationing on the Long Beach Island last week when he found it at the edge of the surf in the community of Beach Haven. It was sharp enough that it hurt as it hit his leg. He thought it was a crab until he picked up the object. The Springfield, Virginia family contacted the Archaeological Society of New Jersey to check it out. The president, Greg Lattanzi, who is also a curator at the New Jersey State Museum in Trenton, tells the Asbury Park Press that the arrow point probably dates back 8,000 to 11,000 years. "I was basically blown away," he said. Only one other in the collection washed up on a beach.

"Jasper is a yellow-brown stone," Lattanzi told the paper. 523_human_origins_eugene_wong.pdf.