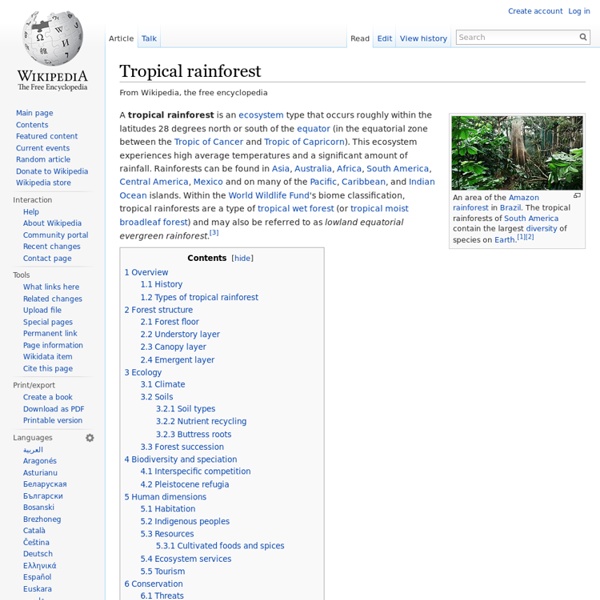 Rainforest Biomes The tropical rain forest is a forest of tall trees in a region of year-round warmth. An average of 50 to 260 inches (125 to 660 cm.) of rain falls yearly. Rain forests belong to the tropical wet climate group. Rainforests now cover less than 6% of Earth's land surface. A tropical rain forest has more kinds of trees than any other area in the world. About 1/4 of all the medicines we use come from rainforest plants. All tropical rain forests resemble one another in some ways. Despite these differences, each of the three largest rainforests--the American, the African, and the Asian--has a different group of animal and plant species. Layers of the Rainforest There are four very distinct layers of trees in a tropical rain forest. Emergent trees are spaced wide apart, and are 100 to 240 feet tall with umbrella-shaped canopies that grow above the forest. Plant Life Besides these four layers, a shrub/sapling layer receives about 3 % of the light that filters in through the canopies. Animal Life

Mire Leftlake Mire on Dartmoor. The lake is a former quarry. A mire or quagmire, sometimes called a peatland in North America, is a wetland terrain dominated by living, peat-forming plants. For botanists and ecologists the term peatland is technically a more universal term for any terrain dominated by peat to a depth of 30–40 cm (12–16 in), even if it has been completely drained (i.e., a peatland can be dry, but a mire by definition must be wet). Because mires rely on rainwater for moisture, they are usually deficient in both oxygen and phosphorus, though they may vary widely with regard to nitrogen.[2]:p.14 These things mean that mires are a kind of "...living relic... Quagmire[edit] The term quagmire is a variant term for a mire, the prefix quag- having been variously written as qua-, quab-, quad-, quake-, qual-, quave-, and quaw- in the 16th and 17th centuries, and afterwards the prefixes bob-, gog-, and wag- having also been used in the same way. References[edit] External links[edit]

Animals Tasks Marsh A marsh along the edge of a small river Marsh in shallow water on a lakeshore A marsh is a type of wetland that is dominated by herbaceous rather than woody plant species.[1] Marshes can often be found at the edges of lakes and streams, where they form a transition between the aquatic and terrestrial ecosystems. They are often dominated by grasses, rushes or reeds.[2] If woody plants are present they tend to be low-growing shrubs. This form of vegetation is what differentiates marshes from other types of wetland such as swamps, which are dominated by trees, and bogs, which are wetlands that have accumulated deposits of acidic peat.[3] Basic information[edit] Marshes provide habitat for many types of plants and animals that have adapted to living in flooded conditions.[1] The plants must be able to survive in wet mud with low oxygen levels. Types of marshes[edit] A salt marsh in Scotland Marshes differ depending mainly on their location and salinity. Salt marshes[edit] Wet meadows[edit]

Plants Waste container Litter bin redirects here. For a place for pet animals to 'go to the toilet' in, see litter box. A waste container is a container for temporarily storing waste, and is usually made out of metal or plastic. Curbside dustbins[edit] The curbside dustbins usually consist of three types: trash cans (receptacles often made of tin, steel or plastic), Dumpsters (large receptacles similar to skips) and wheelie bins (light, usually plastic bins that are mobile). In some areas there is also a recycling service, often with one or more dedicated bins intended to receive items that can be recycled into new products. Bins in public areas[edit] Certain public areas such as parks have litter bins which are placed alongside paths frequently walked by visitors. Bins in outdoor locations or other busy public areas are usually mounted to the ground or wall. A Danish design company called Peoples ApS, have in cooperation with Swedish based Dynasafe AB, developed a "bombproof" bin suitable for public places.

Climate Bog Carnivorous plants, such as this Sarracenia purpurea pitcher plant of the eastern seaboard of North America, are often found in bogs. Capturing insects provides nitrogen and phosphorus, which are usually scarce in such conditions. A bog is a mire that accumulates peat, a deposit of dead plant material—often mosses, and in a majority of cases, sphagnum moss.[1] It is one of the four main types of wetlands. Distribution and extent[edit] Bogs are widely distributed in cold, temperate climes, mostly in boreal ecosystems in the northern hemisphere. Habitats[edit] An expanse of wet Sphagnum bog. Many species of evergreen shrubs are found in bogs, such as Labrador tea. There are many highly specialised animals and plants associated with bog habitat. Types[edit] Bog habitats may develop in various situations, depending on the climate and topography[14] (see also hydrosere succession). Valley bog[edit] These develop in gently sloping valleys or hollows. Raised bog[edit] Blanket bog[edit] Uses[edit]

Tropical Rain Forest As you can see from the map to the right, the tropical rainforests are, indeed, located in the tropics, a band around the equator from 23.5 N (the Tropic of Cancer) to 23.5 S (the Tropic of Capricorn) (red lines on map, right). Because the Earth tilts 23.5 degrees on its axis as it travels around the sun, at some point in the year (the solstices, June 22nd in the north, December 22nd in the south) the sun will be directly overhead on one of these lines. At the equinoxes the sun is directly over the equator. Within this band, solar radiation is most intense, and thus the surface of the planet warms the most. The warmth leads to a lot of evaporation, and as warm, moist air rises, it cools, the water condenses, and the water falls back to the earth as rain. Thus, the warmest areas of the planet also tend to be the wettest, and this sets the stage for the tropical rain forest. Not all of the land in the tropics is tropical rainforest.

Water Water in three states: liquid, solid (ice), and gas (invisible water vapor in the air). Clouds are accumulations of water droplets, condensed from vapor-saturated air. Video demonstrating states of water present in domestic life. Water is a chemical compound with the chemical formula H 2O. Safe drinking water is essential to humans and other lifeforms even though it provides no calories or organic nutrients. Chemical and physical properties Impact from a water drop causes an upward "rebound" jet surrounded by circular capillary waves. Water is the chemical substance with chemical formula H 2O: one molecule of water has two hydrogen atoms covalently bonded to a single oxygen atom. Water appears in nature in all three common states of matter (solid, liquid, and gas) and may take many different forms on Earth: water vapor and clouds in the sky, seawater in the oceans, icebergs in the polar oceans, glaciers in the mountains, fresh and salt water lakes, rivers, and aquifers in the ground.