What is a Rainforest? 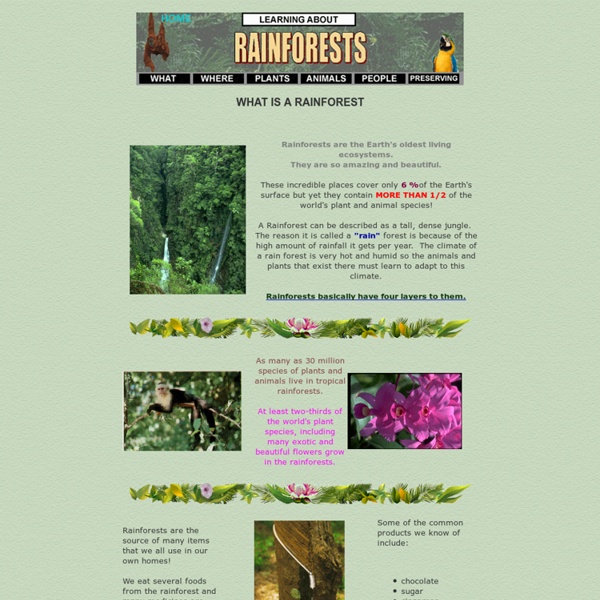 Rain Forest Environmental Problems Deforestation The largest factor of environmental danger to rain forests is deforestation. Mongabay notes Food and Agriculture Organization (FAO) of the United Nations statistics that show 10.4 million hectares of rain forest are destroyed every year. The FAO defines deforestation as "the conversion of forest to another land use or the long-term reduction of the tree canopy cover below the minimum 10 percent threshold." Logging and clear-cutting for farming (often referred to as slash-and-burn) both destroy rain forest permanently. In addition, some trees are removed to make way for roads, dams and mining operations. Degradation Degradation is also very damaging to the rain forest, but there is a possibility that areas affected to this degree can be converted back into forest. Habitat fragmentation is another example of degradation in the rain forest. Climate Change Global warming affects rain forest on a very large scale.

Best Way - Amazon Rainforest Survival Guide Despite the fact the Amazon rainforest is progressively dwindling due to deforestation, it is still vast and people find themselves needing to survive in it on a regular basis. So it is important to know how to survive in this type of seemingly impenetrable, endless jungle if you are unfortunate enough to find yourself stranded there for an extended period of time. While access to food and water are the first concerns, keeping yourself safe from wild animals and knowing what not to consume is also important. Water Considerations While it is a rainforest, which by definition means it rains regularly, it is still rather difficult to obtain water which is not contaminated and is safe for you to drink. Edible Plants There are many plants or fruits from these plants which can be eaten. Animal Hunting and Protection It is also important to set traps for animals, not only to catch them but to protect yourself from them at night. More slideshows

Rain Forest Threats, Rain Forest Species More than half of Earth’s rain forests have already been lost forever to the insatiable human demand for wood and arable land. Rain forests that once grew over 14 percent of the land on Earth now cover only about 6 percent. And if current deforestation rates continue, these critical habitats could disappear from the planet completely within the next hundred years. The reasons for plundering rain forests are mainly economic. Threats Solutions Rainforest Rainforests are forests characterized by high rainfall, with annual rainfall between 250 and 450 centimetres (98 and 177 in).[1] There are two types of rainforest: tropical rainforest and temperate rainforest. The monsoon trough, alternatively known as the intertropical convergence zone, plays a significant role in creating the climatic conditions necessary for the Earth's tropical rainforests. Tropical Tropical rainforests are characterized by a warm and wet climate. Many of the world's rainforests are associated with the location of the monsoon trough, also known as the intertropical convergence zone.[7] Tropical rainforests are located in the tropics, i.e., in the equatorial zone between the Tropic of Cancer and Tropic of Capricorn. Temperate Layers A tropical rainforest is typically divided into four main layers, each with different plants and animals adapted for life in that particular area: the emergent, canopy, understorey/understory and forest floor layers. Emergent layer Soils

Learn Difficult Concepts with the ADEPT Method After a decade of writing explanations, I’ve simplified the strategy I use to get new concepts to click. Make explanations ADEPT: Use an Analogy, Diagram, Example, Plain-English description, and then a Technical description. Here’s how to teach yourself a difficult idea, or explain one to others. Analogy: What Else Is It Like? Most new concepts are variations, extensions, or combinations of what we already know. In our decades of life, we’ve encountered thousands of objects and experiences. Here’s an example: Imaginary numbers. Argh. Negative numbers were distrusted until the 1700s: How could you have less than nothing? Instead of just going East/West, we can go North/South too – or even spin around in a circle. Analogies are fuzzy, not 100% accurate, and yet astoundingly useful. Diagram: Engage That Half Of Your Brain We often think diagrams are a crutch if you aren’t macho enough to directly interpret the symbols. So, here’s a visualization: Example: Let Me Experience The Idea Nope. so Prof.

BBC Nature - Rainforest videos, news and facts Problems in the Amazon Rates of deforestation vary from one Amazon country to another, mostly because the factors that drive this process also vary across the region. In Brazil for instance, most clearing is carried out in large and middle-sized ranches for cattle pasture, whereas the role of small farmers clearing for agriculture is relatively more prevalent in other countries3. Deforestation is particularly marked in areas adjacent to urban centres, roads and rivers. What are the impacts of deforestation? Loss of biodiversity: Species lose their habitat, or can no longer subsist in the small fragments of forests that are left. Habitat degradation: New highways that provide access to settlers and loggers into the heart of the Amazon Basin are causing widespread fragmentation of rainforests. Modified global climate: The forests’ ability to absorb the pollutant carbon dioxide (CO2) is reduced. Loss of water cycling: Deforestation reduces the critical water cycling services provided by trees.

Rainforest Animals Mudras: The Healing Power in your Hands “In this respect, Kundalini Yoga assumes that every area of the hand forms a reflex zone for an associated part of the body and the brain. In this way, we can consider the hands to be a mirror for our body and our mind.” ~ Lothar Rüdiger Lütge, Kundalini yoga expert Practiced since antiquity in combination with pranayama, asanas and meditation, Mudras or Hand Gestures is a practice to improve your physical, mental and spiritual well-being. The subtle hand and finger movements make important connections in the nervous system and stimulate specific energy pathways or nadis. Yogis believed if one wants to cure any disease, they can tap into the energy of the elements and rectify the imbalance with the practice of suitable mudras. Mudras redirect the energy flow to the upper Chakras, and gradually establish a link between all the Koshas (layers) of the body. Gyan mudra is the mudra of knowledge 1) Gyan (Knowledge) or Jnana Mudra: Vaayu mudra balances the air element within your body

How to Make Mindfulness a Habit With Only a Tiny Commitment When you sit back and reminisce about your life, it’s almost a given that the most enjoyable and memorable moments are the ones in which you were completely present. Do you look back with fondness all the times you spent thinking about work while you drove home, or pondered dinner while you wheeled down the frozen aisle? Unfortunately most of life passes that way for most of us. We’re in one place doing one thing, thinking of things we aren’t doing and places we aren’t at. The bottom line of almost all self-help, spiritual, or religious literature is that our ability to be happy is determined by our ability to stay in the present moment. Only when we’re present do we see beauty, enjoy gratitude, and experience happiness. We all know this already. The problem is most of us are extremely habituated to living in our thoughts. The rule about habits is that whatever you do most takes over. Baby steps seem to be in order. Establishing a Foothold First of all, forget about staying mindful 24-7.