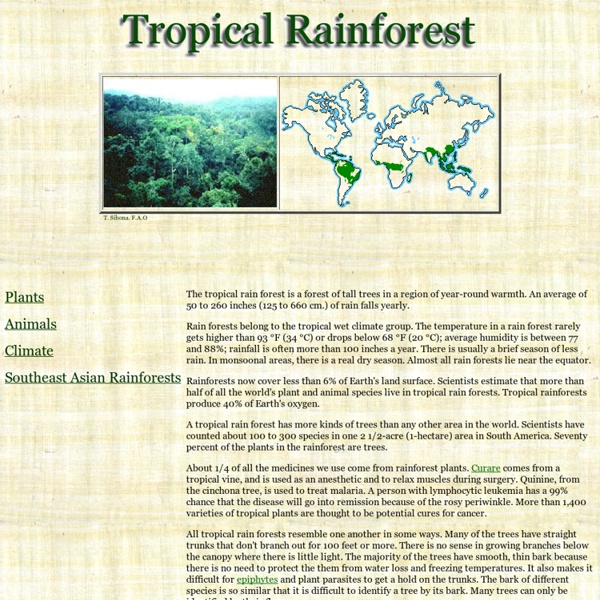 The tropical rain forest is a forest of tall trees in a region of year-round warmth. An average of 50 to 260 inches (125 to 660 cm.) of rain falls yearly. Rain forests belong to the tropical wet climate group. The temperature in a rain forest rarely gets higher than 93 °F (34 °C) or drops below 68 °F (20 °C); average humidity is between 77 and 88%; rainfall is often more than 100 inches a year. There is usually a brief season of less rain. In monsoonal areas, there is a real dry season. Rainforests now cover less than 6% of Earth's land surface. A tropical rain forest has more kinds of trees than any other area in the world. About 1/4 of all the medicines we use come from rainforest plants. All tropical rain forests resemble one another in some ways. Despite these differences, each of the three largest rainforests--the American, the African, and the Asian--has a different group of animal and plant species. Layers of the Rainforest Plant Life Animal Life Where the Rainforests Are Found

Blue Planet Biomes - Animals The First Organisms Close to 2.5 billion years ago, the earth's surface and atmosphere were stable enough to support primitive life. Single-cell organisms began to develop in the seas that covered the planet. Most of them were very simple single-cell bacteria that fed on chemicals in the ocean's waters. A simple organism known as blue-green algae appeared and spread across the seas. Tropical rainforest A tropical rainforest is an ecosystem type that occurs roughly within the latitudes 28 degrees north or south of the equator (in the equatorial zone between the Tropic of Cancer and Tropic of Capricorn). This ecosystem experiences high average temperatures and a significant amount of rainfall. Rainforests can be found in Asia, Australia, Africa, South America, Central America, Mexico and on many of the Pacific, Caribbean, and Indian Ocean islands. Within the World Wildlife Fund's biome classification, tropical rainforests are a type of tropical wet forest (or tropical moist broadleaf forest) and may also be referred to as lowland equatorial evergreen rainforest.[3] Overview[edit]

Zoom Rainforest Advertisement. EnchantedLearning.com is a user-supported site. As a bonus, site members have access to a banner-ad-free version of the site, with print-friendly pages.Click here to learn more. (Already a member? Click here.) What is a Rainforest? Blue Planet Biomes - Plants The Importance of Plants Close to 2.5 billion years ago, the earth's surface and atmosphere were stable enough to support primitive life. Single-cell organisms began to develop in the seas that covered the planet. A simple organism known as blue-green algae appeared and spread across the seas. Blue-green algae used sunlight and water to make food, and in the process, created oxygen.

Rainforest Video & Map GREEN Click on a biome on the above graph for more information, informative videos, and links to scientist profiles, travel information, lesson plans and species profiles for each region. We'd like to know where you're coming from. If you've used this site for a class project or browsing for fun, add yourself to our map and communicate with other "ecogeeks" Rainforest Climates R a i n f o r e s t C l i m a t e s Rainforests are defined—as you would expect—by rainfall, and in fact they are literally created by it. (“Rain forest”—two words—is the older usage: both are accepted, but most modern authors and researchers combine the two, as does PTK, as in “Rainforest.”) They can be found where rain exceeds 80 inches per year, and can appear in temperate as well as tropical zones, so long as the rainfall is sufficiently plentiful. Tropical rainforests often have from 160 to 400 inches of rain a year. But they aren’t the wettest or even the hottest places on Earth.

Rainforest animals: Zoom Rainforests Advertisement. EnchantedLearning.com is a user-supported site. As a bonus, site members have access to a banner-ad-free version of the site, with print-friendly pages.Click here to learn more. (Already a member? Click here.)

Earth Floor: Biomes Tropical Rainforest: Animals Tropical rainforests support a greater number and variety of animals than any other biome. One of the reasons for this great variety of animals is the constant warmth. Tropical rainforests also provide a nearly constant supply of water and a wide variety of food for the animals. Small animals, including monkeys, birds, snakes, rodents, frogs, and lizards are common in the tropical rainforest. Many of these animals and a multitude of insects never set foot on the ground. The animals use the tall trees and understory for shelter, hiding places from their predators, and a source of food.

Fact sheet: Tropical Rainforest Animals Where can you find an antelope the size of a rabbit, a snake that can fly, or a spider that eats birds? All in tropical rainforests, of course! Tropical rainforests are home to the largest and the smallest, the loudest and the quietest of all land animals, as well as some of the most dangerous, most beautiful, most endearing and strangest looking animals on earth. You've probably heard of some of them: jaguars, toucans, parrots, gorillas, and tarantulas all make their home in tropical rainforests. But have you ever heard of the aye-aye? Or the okapi?