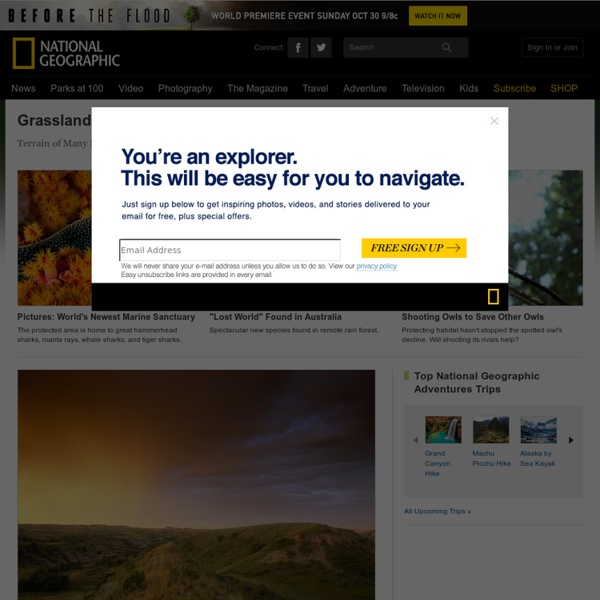 Grasslands go by many names. In the U.S. Midwest, they're known as prairies. In South America, they're called pampas. Central Eurasian grasslands are referred to as steppes, while in Africa they're named savannas. What they all have in common is grass as their naturally dominant vegetation. In fact, most grasslands are located between forests and deserts. There are two different kinds of grasslands: tropical and temperate. Tropical grasslands are warm year round, but usually have a dry and a rainy season. Temperate grasslands, which average between 10 and 30 inches (25 and 75 centimeters) of rain per year, have shorter grasses, sometimes just a few millimeters. The animals that live in temperate grasslands have adapted to the dry, windy conditions. When rainy season arrives, many grasslands become coated with flowers, some of which can survive well into winter with the help of underground storage organs and thick stem bases.

Grasslands Modern agriculture does make some nods to these problems. Crop rotation, where one crop is grown in a field one year and another crop the next, does much to combat the worst problems of pest buildup and soil nutrient exhaustion in fields. In many cases, corn is rotated with soybeans; the latter are legumes which harbor Rhizobium, an endosymbiotic bacterium which converts atmospheric nitrogen into a form that plants can use to make proteins. In this way, planting soybeans (or alfalfa) may increase the nitrogen content of the soil and reduce the need for nitrogen-based fertilizers. In any event, agricultural systems displace natural communities; given the world's need for food to feed the human population (and we're now raising corn to convert into ethanol to fuel our cars!) this is not due to change anytime soon.

Earth Observatory Temperature Dependent on latitude, yearly range can be between -20°C to 30°C Precipitation Grasslands Biome Grassland biomes are large, rolling terrains of grasses, flowers and herbs. Latitude, soil and local climates for the most part determine what kinds of plants grow in a particular grassland. A grassland is a region where the average annual precipitation is great enough to support grasses, and in some areas a few trees.

Grasslands Threats, Wetlands Threats - National Geographic A quarter of Earth was once covered by grasslands, but much of these have now been turned into farms. This has resulted in a widespread loss of wildlife habitat. Grassland soil is rich, and almost anything can be grown there. Temperate Grasslands Location Temperate grasslands are located north of the Tropic of Cancer (23.5 degrees North) and south of the Tropic of Capricorn (23.5 degrees South). The major temperate grasslands include the veldts of Africa, the pampas of South America, the steppes of Eurasia, and the plains of North America. Plants Grasses are the dominant vegetation.

Science for Kids The grasslands biome can be divided up into the temperate grasslands and tropical grasslands. On this page we will discuss the temperate grasslands. Tropical grasslands are also called savannas. You can read more about this biome on the savanna biome page. The grassland biome Online exhibits : The world's biomes The grassland biome Grasslands are characterized as lands dominated by grasses rather than large shrubs or trees. In the Miocene and Pliocene Epochs, which spanned a period of about 25 million years, mountains rose in western North America and created a continental climate favorable to grasslands. Ancient forests declined and grasslands became widespread. Following the Pleistocene Ice Ages, grasslands expanded in range as hotter and drier climates prevailed worldwide.

Information About Buffalo Grass Overview Buffalo grass is a perennial turf grass that produces soft, blue-green curly blades and spreads easily through rhizome growth. The grass is a warm-season variety that can be planted either by seed or grass plugs in the spring or fall season.