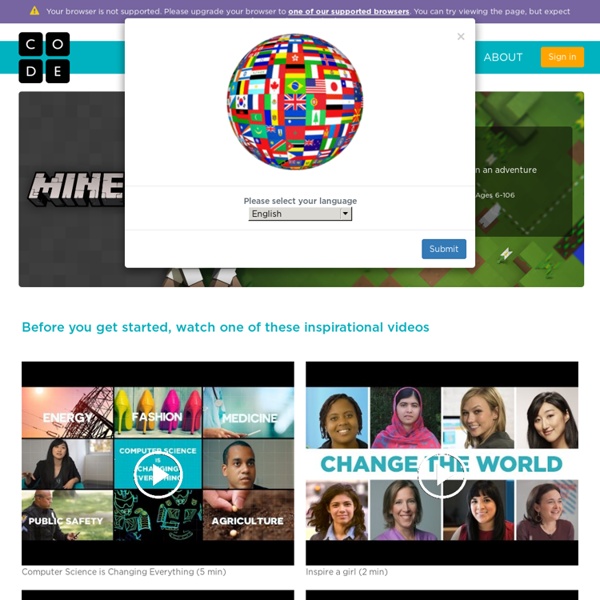 Hour of Code Suggestions by Grade Level Here are ideas of apps and websites that teachers in my PLN used successfully in the past during Hour of Code: Kindergarten Start kindergartners with problem solving. Offline · google/blockly-games Wiki Got limited or unreliable Internet? Download a full copy of Blockly Games using the links below. Choose your language (3MB compressed, 5MB uncompressed): Unzip the downloaded file and open index.html in a web browser. The games can be distributed on an intranet, CD, USB drive, or any other storage media.

15 Incredible Architectural Feats Made in Minecraft With more than 70 million copies sold worldwide, it would be unfair to refer to Minecraft as just a simple game of textured boxes in a pixelated 3D world. After acquiring the makers of the game (Mojang) in 2014, Microsoft announced on Tuesday, January 19 that it also acquired MinecraftEdu, the official educational version of Minecraft, which is used as a creative tool in more than 10,000 classrooms in 45 countries around the world. The infinite possibilities that the game offers have led millions of people around the world to make and share their greatest creations: cities, buildings and even the reinterpretation of historical structures. Minecraft's impact was recognized in 2015 when the Centre Pompidou dedicated an exhibition to its creative potential for children and adolescents. We've rounded up 15 of the best models created on the platform.

Code Monster from Crunchzilla <h2>Code Monster gets kids excited about programming. It is a combination of a game and tutorial where kids experiment with learning to code. <p> Code Monster use Javascript. Please enable Javascript if you want the play with the Code Monster. Otherwise, Code Monster will not be able to play with you. 10 block demos for Scratch Sean McManus shares some 10 block demos that demonstrate popular techniques in Scratch When I first started programming on the Amstrad CPC computer, magazines used to publish short listings. People could use them to learn how to program, and as building blocks for their own programs. One of the magazines had a feature called 10-liners, where programmers were invited to show what they could do in 10 lines of Basic.

For the Hesitant Teacher: Leveraging the Power of Minecraft If there’s any video game that has successfully made its way into the classroom, it’s Minecraft. There’s a small subset of teachers using all kinds of digital games in interesting ways, but the blockbuster hit Minecraft and its educational counterpart MinecraftEDU have reached much wider audiences. But getting started with MinecraftEDU can be intimidating for teachers who don’t consider themselves “gamers” and aren’t sure how to harness the engagement and excitement of Minecraft. Luckily, there’s a robust and global Minecraft teacher community to supply tips, support and even lesson plans. Teachers who already use Minecraft in the classroom love it because of the flexibility it offers — almost any subject can be taught with a little creativity.

Coding with Ozobots Calibrate Your Ozobot What does this mean? Ozobot’s “eyes” (the sensors) are very sensitive to the surrounding light. So much so that, if the paper changes or if you go closer to the window, it affects how Ozobot sees what’s underneath. Creative Computing 7 units44 activitiesremixing encouraged download the Scratch 3.0 version of the guide> help learnerscreate new worldswith computing download the Scratch 3.0 version of the guide an introductorycomputing curriculumusing Scratch Scratch 3.0 is here! GETTING STARTED WITH MINECRAFTEDU ISTE NETS - Digital Age Skills 1. Creativity and Innovation Students demonstrate creative thinking, construct knowledge, and develop innovative products and processes using technology. Apply existing knowledge to generate new ideas, products, or processes Create original works as a means of personal or group expression Use models and simulations to explore complex systems and issues Identify trends and forecast possibilities

Kids Who Code: 8 Terrific Books That Introduce Programming When I was a kid I thought we’d all be living on the moon by 2016, so the fact that I still don’t even have one robot servant is pretty disappointing. However, every time I start thinking the 21st century doesn’t feel enough like the future, I remind myself that my nine-year-old daughter takes LEGO Robotics programming classes at her elementary school, and suddenly it feels like maybe hoverboards aren’t all that far away. All over the world, kids as young as five and six are learning how to write their own software code, which is AMAZING. Minecraft is finally fixing its huge gender problem Children play Minecraft at a Microsoft store in Bellevue, Wash. (David Ryder/Bloomberg News) When Pauline Stanley's 6-year-old daughter, Isabell, started playing Minecraft, she was excited to join her fellow first-grade players, who'd become obsessed with adventuring around the game's vast digital universe and building with Lego-like blocks. But there was one problem: In the boundlessly creative world of one of the most popular video games, the only character she could play was Steve, a bulky man with short, dark hair and a 5 o'clock shadow.