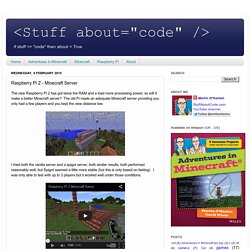 The old Pi made an adequate Minecraft server providing you only had a few players and you kept the view distance low. I tried both the vanilla server and a spigot server, both similar results, both performed reasonably well, but Spigot seemed a little more stable (but this is only based on feeling). I was only able to test with up to 3 players but it worked well under those conditions. Setting up your own server is pretty simple. You will need to download either the vanilla server from Mojang or build your own spigot server jar file.

Note - The instructions below, will take you through how to create a vanilla server, if you have built spigot the only difference will be the name of the 'jar file' you put into the start.sh file 1. Mkdir ~/MinecraftServer cd ~/MinecraftServer 2. Wget 3. Nano start.sh Enter the following command which will run the server Ctrl X to exit & save 4. Minecraft Pi Edition: SURVIVAL mode-ish - teachwithict. Night time mode with animals in Minecraft Pi: Edition To install and load a survival map in Minecraft Pi Edition:1. 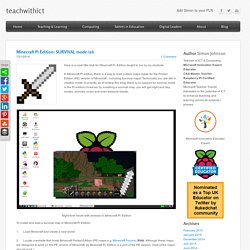 Load Minecraft and create a new world2. Locate a website that hosts Minecraft Pocket Edition (PE) maps e.g. Minecraft Forums (Note: Although these maps are designed to work on the PE version of Minecraft, as Minecraft Pi: Edition is a port of the PE version, most of the maps should work.)3. Download a Survival map (Note: If the map is in .zip format, you will need to extract it first)4. 6. 7. 8. 9. Minecraft Pi Edition: SURVIVAL mode-ish - teachwithict. How to Install Minecraft on Raspberry Pi. How To Setup Minecraft On The Raspberry Pi. Until recently I had never played Minecraft but it’s popularity meant it was something I felt I had to try. 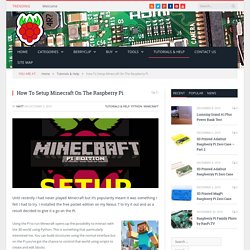 I installed the free pocket edition on my Nexus 7 to try it out and as a result decided to give it a go on the Pi. Using the Pi to run Minecraft opens up the possibility to interact with the 3D world using Python. This is something that particularly interested me. You can build structures using the normal interface but on the Pi you’ve got the chance to control that world using scripts to create and edit blocks. The Pi Edition is similar to earlier versions of the Pocket Edition and only offers “Creative” mode. So lets get started! The latest version of Raspbian already includes Minecraft so you don’t need to install it manually. Installation I suggest starting off with a fresh installation of Raspbian on your SD card. Worksheet - Getting Started with Minecraft Pi. 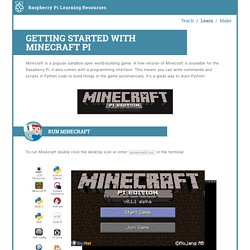 A free version of Minecraft is available for the Raspberry Pi; it also comes with a programming interface. This means you can write commands and scripts in Python code to build things in the game automatically. It's a great way to learn Python! Minecraft: Pi Edition - API Tutorial. This tutorial started off as an article I wrote on Minecraft: Pi Edition for the Issue 11 of The Mag Pi, a magazine written by Raspberry Pi enthusiasts, and builds on my first post Raspberry Pi - Minecraft - API Basics, which describes the basics of how to use the API. 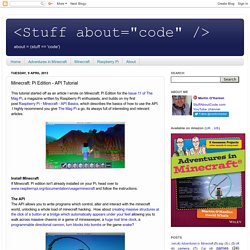 I highly recommend you give The Mag Pi a go, its always full of interesting and relevant articles. Install Minecraft If you haven't done so already, head over to this post for how to Install Minecraft on the Raspberry Pi. The API The API allows you to write programs which control, alter and interact with the minecraft world, unlocking a whole load of minecraft hacking. How about creating massive structures at the click of a button or a bridge which automatically appears under your feet allowing you to walk across massive chasms or a game of minesweeper, a huge real time clock, a programmable directional cannon, turn blocks into bombs or the game snake?

Libraries API Example Create Directory. Minecraft API. This is a reference of Minecraft Python API Library, which is supported on Minecraft: Pi edition and the PC version using the RaspberryJuice plugin. 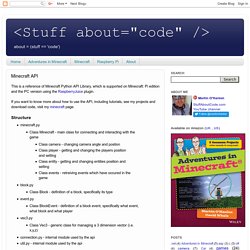 If you want to know more about how to use the API, including tutorials, see my projects and download code, visit my minecraft page. Structure minecraft.pyClass Minecraft - main class for connecting and interacting with the gameClass camera - changing camera angle and postionClass player - getting and changing the players position and settingClass entity - getting and changing entities position and settingClass events - retreiving events which have occured in the gameblock.pyClass Block - definition of a block, specifically its typeevent.pyClass BlockEvent - definition of a block event, specifically what event, what block and what playervec3.pyClass Vec3 - generic class for managing a 3 dimension vector (i.e. x,y,z)connection.py - internal module used by the apiutil.py - internal module used by the api Compatability Available on RaspberryJuice .x. 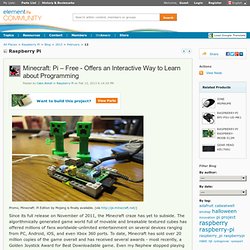 (via Since its full release on November of 2011, the Minecraft craze has yet to subside. The algorithmically generated game world full of movable and breakable textured cubes has offered millions of fans worldwide-unlimited entertainment on several devices ranging from PC, Android, iOS, and even Xbox 360 ports. To date, Minecraft has sold over 20 million copies of the game overall and has received several awards - most recently, a Golden Joystick Award for Best Downloadable game. Even my Nephew stopped playing first-person shooters and switched to Minecraft, which is quite an accomplishment. Raspberry Pi - Minecraft - Hide and Seek. Ive been playing around with the pre-release of minecraft on the Raspberry Pi and in particular the API, see this post for some background on the basics, and rather than watching 'Food Inspectors' on the tv, I thought I would see if I could write a game in minecraft (a game in a game I suppose) in an hour. 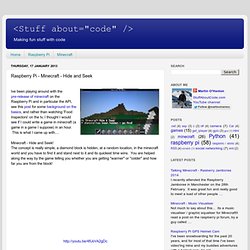 This is what I came up with.... Minecraft: Pi Edition - Create Massive 3D Models. I love a massive construction in Minecraft, you know when someone creates a scale model of the earth or a house to put the Taj Mahal to shame, but I'm lazy and I'm definitely not going to spend months of my time building one. 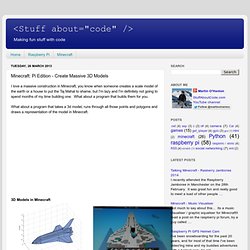 What about a program that builds them for you. What about a program that takes a 3d model, runs through all those points and polygons and draws a representation of the model in Minecraft. 3D Models in Minecraft Update - Ive pushed the boundaries of this program much further and rendered Manhattan Island in Minecraft.How The concept of making this work is pretty simple. 3d models can be saved as a particular type of file, an obj, which is an uncompressed text representation of the model, it describes all the points (aka vertices) as x, y, z coordinates and faces, 3 or more points which when connected create a block or polygon.