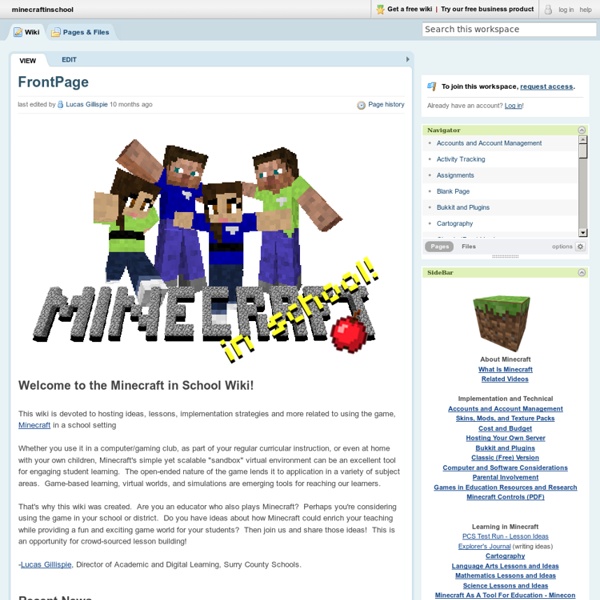 This wiki is devoted to hosting ideas, lessons, implementation strategies and more related to using the game, Minecraft in a school setting Whether you use it in a computer/gaming club, as part of your regular curricular instruction, or even at home with your own children, Minecraft's simple yet scalable "sandbox" virtual environment can be an excellent tool for engaging student learning. The open-ended nature of the game lends it to application in a variety of subject areas. Game-based learning, virtual worlds, and simulations are emerging tools for reaching our learners. That's why this wiki was created. -Lucas Gillispie, Director of Academic and Digital Learning, Surry County Schools. Recent News (11/10/15) - Here's a Sustainable Community Project we're working on at Gentry Middle School. (6/1/15) -Alice Keeler (@alicekeeler) is awesome, but you knew that, right? (12/18/13) - Great tutorial video on how to level in mcMMO by Aidan. (12/8/13) - Lots to share! Inverted Restone Related:  Minecraft

MinecraftEDU wiki Gaming in Education rbg gHome Educational Technology Gaming in Education Using gaming in educational settings opens the doors for new possibilities in teaching and learning. According to Elliot Masie, gaming allows learners to "fail to success". Creating games will become easer in the future too. Some Interesting Gaming Facts Here are some interesting facts on gaming from the Learning Federation: An 8th grader plays video games an average of 5 hours per week By high school, 77% of students have played games; by college nearly all have 60% of college students are regular game players As of April 2005, America’s Army had more than 5 million registered users According to the Pew Internet & American Life Project: 70% of college students play video or online games at least once in a while. 65% of college students are regular or occasional game players. Educational Gaming Resources Online Some questions to ask when evaluating games How compelling or engagnin was the experience? MIT Education Arcade Armed Forces Games

MorrowCraft - Schools Working with Minecraft Minecraft in School started by: Lucas Gillispie Read more. An unexpected new star, Minecraftis taking the "Games in School" crowd by by storm! Students are crazy about this game and educators are finding a virtual gold mine of curriculum possibilities. Jo Kay, Dean Groom & Bron Stuckey team up to create - Massively Minecraft Educator Community What a dynamic team to gather and lead a community of educators in exploring how kids (young & old :-) learn in this unique space.Check out the kids' - Miner's Charter Robert Kahn is a middle school science teacher using Minecraft and gaming in the classroom. Check out his blog. Liam O'Donnell has started to document his students' work/play in this fascinating article - Messy Learning With Minecraft on his blog, feeding change.

Gaming in Education – Minecraft in Schools? I recently returned from a holiday in Orlando, Florida, where I was privileged to be able to attend “Minecon”, a convention for the popular sandbox game “Minecraft”, developed by Mojang AB. Personally I’m a big fan and long term player of the game, and I’m amazed at how this ‘phenomenon’ has swept across the world. It was great to see how the game is being used and where the game is heading in the future. You might think this is an odd thing to write about on an Education related blog, but there is a link, trust me… read on One of the exhibitors at the convention was TeacherGaming, an organisation who have chosen to focus on ways in which games can be used in an educational setting. Their current, ongoing, project is starting to make schools and educators sit up and pay attention. What is MinecraftEdu? According to the MinecraftEdu website: MinecraftEdu is the collaboration of a small team of educators and programmers from the United States and Finland. Why Use MinecraftEdu? Technical Stuff

pcs-tech / 2011-2012 Board Mini-Grant Minecraft Project - FAQ 1. What is Minecraft? 2. What age/grade should students be in order to use Minecraft? 3. 4. 5. 6. 7. 8. 9. 10. 11. 1. Minecraft is an independently-developed video game created by Swedish game programmer Marcus "Notch" Persson. Here are a few videos to introduce you to the game: From the official website: A fan-made video trailer for the game: 2. One of the beautiful things about this game is that it appeals to a wide age group. 3. This is largely up to you. Here's an example of a student's history/civics project: 4. Yes! Here's a video of our kids sharing their work from last year: 5. To use Minecraft with students, you'll need access to a computer lab with newer Dell computers (those with the silver sides). 6. That really depends on what you're doing. 7. Absolutely. 8. Our plans are to operate two different virtual worlds for this project. 9. Again, that depends on what you want to do. 10. If you are the recipient of a grant, you will have access to 25 Minecraft accounts. 11. You bet!

MorrowCraft - home How Social Gaming is Improving Education For decades, educators have been scrambling to find better ways to prepare students for the real world. It began with the mildly apocalyptic government report, A Nation at Risk, which warned that an outdated school system was unwittingly sabotaging America’s economic superiority. Year after year, major educational organizations would echo the report’s call with threats of dire consequences and pleas for sweeping reform, from the U.S. Audits of the U.S. educational system have revealed that the highest hurdle to adopting skills-based teaching practices is the lack of an easily implementable curriculum. Enter social video games as a solution — immersive environments that simulate real-world problems. Contextual Learning While university departments have cleanly separated academic subjects, solving the real-life problem of, say, building a website, requires individuals to orchestrate the expertise of communication, business, and economics, in addition to computer science. Simulated Life