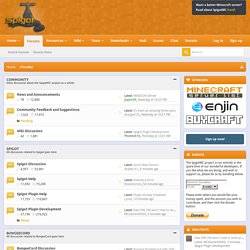 General discussion about, Spigot and its features. Help about problems or issues involving Spigot that are not the result of a suspected bug. Having trouble setting up a plugin, or confused about a specific aspect of it? Come here for help! For assistance in the development of Spigot (or Bukkit) plugins. Discussion about BungeeCord, the leading Minecraft cloud integration suite. 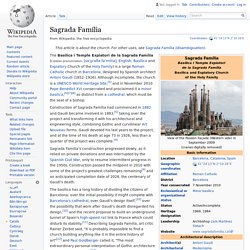 Although incomplete, the church is a UNESCO World Heritage Site,[5] and in November 2010 Pope Benedict XVI consecrated and proclaimed it a minor basilica,[6][7][8] as distinct from a cathedral, which must be the seat of a bishop. Construction of Sagrada Família had commenced in 1882 and Gaudí became involved in 1883,[5] taking over the project and transforming it with his architectural and engineering style, combining Gothic and curvilinear Art Nouveau forms. Gaudí devoted his last years to the project, and at the time of his death at age 73 in 1926, less than a quarter of the project was complete.[9] History[edit] Gaudí's model of the completed church. Labeling Dispensers and Chests. ResidenceBukkitMod - Command list.

Brewing. Potion brewing chart (excludes splash potions) Brewing (or Alchemy) is the process of creating potions and splash potions by adding various ingredients to water bottles in a brewing stand. 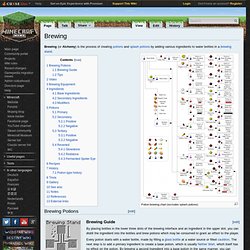 [edit] Brewing Potions Brewing "grid" (Ingredients are placed at the top. Bottles placed underneath) [edit] Brewing Guide By placing bottles in the lower three slots of the brewing interface and an ingredient in the upper slot, you can distill the ingredient into the bottles and brew potions which may be consumed to grant an effect to the player.

Every potion starts with a water bottle, made by filling a glass bottle at a water source or filled cauldron. Crafting. Crafting is the method by which many blocks, tools, and materials are made in Minecraft. In order to craft something, players must move items from their inventory to a crafting grid. A 2×2 crafting grid can be accessed from the player's inventory. A 3×3 grid can be accessed by using a crafting table. Java & Bedrock Edition crafting system[edit | edit source] For some items, the arrangement of their ingredients on the crafting grid is unimportant. On the other hand, many of the more important or useful game objects must have their ingredients placed in the correct relative positions on the crafting grid.

Players always have access to the 2×2 crafting grid from their inventory screen, and this can be used whenever the screen is brought up. Notes Jump up ↑ On this wiki, shapeless recipes are marked with a pair of intertwined arrows on the crafting table graphic. Recipe Book[edit | edit source] Crafting recipes are organized in several different categories, as follows: Minecraft 1.2.5 Probabilities « 0xCAFEBABE. This data has been verified to still be correct in 1.2.5 – Bows Added! 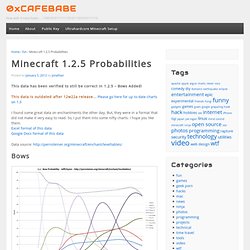 This data is outdated after 12w22a release… Please go here for up to date charts on 1.3 I found some great data on enchantments the other day. But, they were in a format that did not make it very easy to read. So, I put them into some nifty charts. I hope you like them.Excel format of this dataGoogle Docs format of this data Data source: Bows Tools Swords Armor Boots.