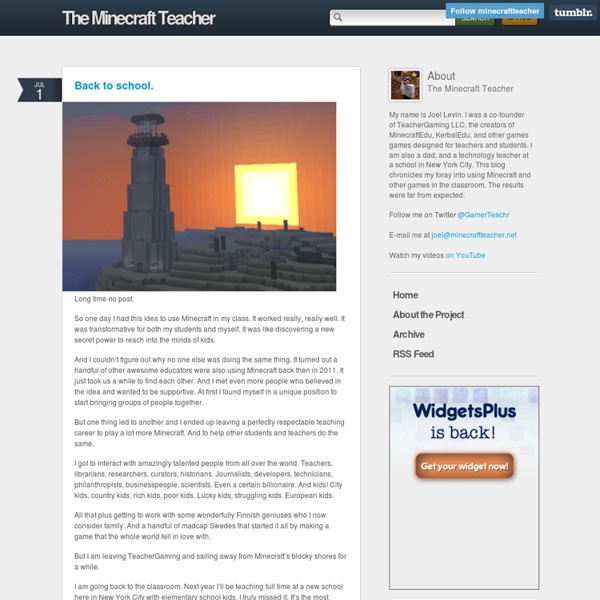 Back to school. Long time no post. So one day I had this idea to use Minecraft in my class. It worked really, really well. It was transformative for both my students and myself. It was like discovering a new secret power to reach into the minds of kids. And I couldn’t figure out why no one else was doing the same thing. But one thing led to another and I ended up leaving a perfectly respectable teaching career to play a lot more Minecraft. I got to interact with amazingly talented people from all over the world. All that plus getting to work with some wonderfully Finnish geniuses who I now consider family. But I am leaving TeacherGaming and sailing away from Minecraft’s blocky shores for a while. I am going back to the classroom. It’s been an absolute honor to work with Minecraft. I feel quite lucky to have been involved during this unbelievably cool time period in Minecraft’s development. I think I will be playing Minecraft forever. What would you like to hear/see from me? Peace out, kids.

MinecraftEDU: Minecraft for the Classroom It's been almost a year since I first wrote about the work of Joel Levin (aka "The Minecraft Teacher") bringing the 3D world-building game Minecraft into his second-grade classroom. Much has changed since then -- the full release of the PC version of the game, for starters. Mojang co-founder "Notch" stepping down as the lead developer of Minecraft (that is sort of "inside baseball" information, I suppose). And Levin himself co-founding a startup -- TeacherGaming -- the only company sanctioned by Mojang as an official reseller of the game. Levin's still teaching too, but he's also hard at work helping other educators implement Minecraft in their own classes. Currently, that takes the form of MinecraftEDU, TeacherGaming's first endeavor.

MinecraftEdu mod Playing Minecraft with students in a classroom setting is an amazing experience. However, the barrier to entry used to be quite high. To get the most out of the game, you needed to have a strong technical background, be comfortable running servers, and be willing to troubleshoot problems at any given moment. These challenges could be insurmountable for many teachers. MinecraftTeachr's Channel Joel Levin @MinecraftTeachrComputer Teacher at Columbia Grammar and Preparatory School in NYC.Owner of TeacherGaming LLC, creators of MinecraftEduminecraftteacher.netminecraftedu.com Bob Kahn@rwkahn38th grade science teacher at Brentwood School in Los Alex Leavitt@alexleavittPhD Student, USC Annenberg School for Communication & Journalism - Studying the "cultural importance of Minecraft, especially with regard to participatory spaces online". Heather Burditt@swiss_army_wifeAdvocate for "Radical Unschooling"

The Port of Hambeck To increase the trade in his lands, Lord Occam decided to found a new port town in his realm. Near the mouth of the river Sarum, he found the perfect spot to attract new settlers. To provide security for the settlers and their trading, Lord Occam decreed that a castle should first be built on the small island of Holm in the bay. A hall for gatherings was the first to be built, followed by a small gate tower leading to a small ship bridge connecting the island of Holm with the Hambeck mainland. Finally a large tower for the lord was constructed. This centerpiece of the castle was built with walls more than three meters thick, enabling the internal staircases to be built hidden from view.

MinecraftEdu: The Craft Of Digital Citizens MinecraftEdu: The Craft Of Digital Citizens by TeachThought Staff Originally released in 2011, Minecraft quickly found a place in classrooms around the world. It was dead simple to use–at its simplest you stack digital blocks, and its most complex you can recreate entire cities, create video games within the video game, (roughly) functioning ecosystems, and more. NomadicEducation: Minecraft Lesson Plans Minecraft allows players to explore, interact with, and modify a dynamically-generated map made of one-cubic-meter-sized blocks. The environment features plants, mobs, and items. Some activities in the game include mining for ore, fighting hostile mobs, and crafting new blocks and tools by gathering resources found in the game. The game's open-ended model allows players to create structures, creations and artwork on multiplayer servers or on their own single player maps. Game developers seem to be great believers in learning theories and brain research.

Need some help wiring an Iron Door Going solely by what the OP asked. 2 levers, 1 on each side of the door, that when used will open/close the door on use no matter the input of the other lever. what you're looking for is something called a XOR Gate (or XNOR Gate if you want to use that, but an XNOR is simply an inverted XOR). basically when the levers are in the same position, the door will close. you can avoid having to invert a XOR Gate simply by inverting the door itself. so that when it's powered off, it's open, and when powered on, it's closed. The door placement can be a little finisky, but if you mess with the circuits a bit, you can easily do it. Minecraft in the Classroom and Library “Can you teleport me?” “How do I fly?” “I need a sword.” “What are you building?” Gamification in Education The breakthrough happened after the student took the Bartle's Gamer Profile Quiz and we found out that he was a "killer." Off-the-charts killer, but achievement meant nothing to this student. Just like grades.

Getting started - MinecraftEdu wiki After you have installed the MinecraftEdu, your next steps are to start a server and join it with a MinecraftEdu client. (Please note: you must use a version of the client which has been modified specifically for MinecraftEdu, and not a regular Minecraft client, in order to connect to the server. Otherwise, you may see an error message stating, "Internal exception: java.net.SocketTimeoutException: Read timed out.") In this page you will find information about how to complete those tasks and more.

Minecraft Crafting Guide - Recipes List The crafting guide is a comlete list og recipes. This guide tells you how to craft in Minecraft and includes everything from simple tools and weapons, to crafting complex mechanisms and transporation devices. The guide is updated to Minecraft version 1.7.2, 1.6.4 and 1.6.4. Quick jump to overview