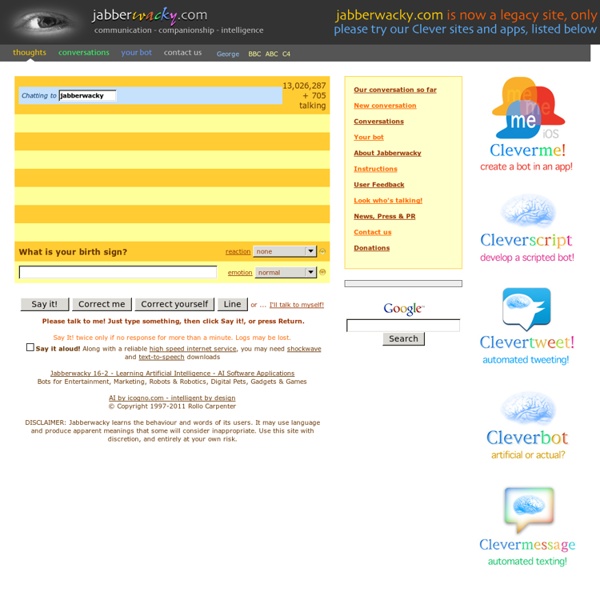 Please talk to me! Just type something, then click Say it!, or press Return. Say It! twice only if no response for more than a minute. Logs may be lost.Say it aloud!

AlanTuring.net What is AI? By Jack Copeland © Copyright B.J. Copeland, May 2000 Artificial Intelligence (AI) is usually defined as the science of making computers do things that require intelligence when done by humans. AI has had some success in limited, or simplified, domains. However, the five decades since the inception of AI have brought only very slow progress, and early optimism concerning the attainment of human-level intelligence has given way to an appreciation of the profound difficulty of the problem. List Of Chat Bots - Artificial Intelligence Chat bots are bots that will talk with the user. This is a place to list them Chat Bots Edit Loebner Prize Winners

#sm Editor’s note, April 1, 2016: This project was formerly known as Project AIX and has now been renamed Project Malmo. In the airy, loft-like Microsoft Research lab in New York City, five computer scientists are spending their days trying to get a Minecraft character to climb a hill. That may seem like a pretty simple job for some of the brightest minds in the field, until you consider this: The team is trying to train an artificial intelligence agent to learn how to do things like climb to the highest point in the virtual world, using the same types of resources a human has when she learns a new task. That means that the agent starts out knowing nothing at all about its environment or even what it is supposed to accomplish. It needs to understand its surroundings and figure out what’s important – going uphill – and what isn’t, such as whether it’s light or dark.

John Conway's Game of Life The Game The Game of Life is not your typical computer game. It is a 'cellular automaton', and was invented by Cambridge mathematician John Conway. This game became widely known when it was mentioned in an article published by Scientific American in 1970. It consists of a collection of cells which, based on a few mathematical rules, can live, die or multiply. Depending on the initial conditions, the cells form various patterns throughout the course of the game. Alan Turing Scrapbook - Turing Test The before-math Alan Turing wrote this paper while employed at the Computing Laboratory in Manchester University. This was where the world's first stored-program digital computer had been engineered. See the previous Scrapbook page for the relationship between Turing and his universal machine, the mathematician Max Newman, and the engineers led by F. C. Williams.

Microsoft is using Minecraft to train AI and wants you to help out Computer scientists at Microsoft have developed a new artificial intelligence platform atop the hugely popular video game Minecraft. Dubbed AIX, the platform hooks into Minecraft and allows the AI to take control of a character and learn from its actions. It's early days for the project; so far, the scientists have been hard at work getting the the AI to learn to climb a hill. It's a simple enough task to program directly, but for an AI that starts out knowing nothing at all about its environment or what it's supposed to be doing, that's a big ask. The AI not only needs to understand its surroundings, but it also needs to figure out the difference between day and night, why walking on lava is probably a bad idea, and when exactly it has achieved its goal via a system of rewards.

Maillardet's Automaton at The Franklin Institute In November of 1928, a truck pulled up to The Franklin Institute science museum in Philadelphia and unloaded the pieces of an interesting, complex, but totally ruined brass machine. Donated by the estate of John Penn Brock, a wealthy Philadelphian, the machine was studied and the museum began to realize the treasure it had been given. This Automaton, known as the "Draughtsman-Writer" was built by Henri Maillardet, a Swiss mechanician of the 18th century who worked in London producing clocks and other mechanisms. It is believed that Maillardet built this extraordinary Automaton around 1800 and it has the largest "memory" of any such machine ever constructed—four drawings and three poems (two in French and one in English). Automata, such as Maillardet's Automaton, demonstrated mankind's efforts to imitate life by mechanical means—and are fascinating examples of the intersection of art and science.

From Eliza to A.L.I.C.E. (A.L.I.C.E. AI Foundation) The story of Joseph Weizenbaum is in many ways almost as interesting as that of Turing. An early pioneer in computer science, Weizenbaum was one of the fortunate few to join the embryonic MIT Artificial Intelligence Lab in the early 1960s. His most celebrated accomplishment was the development of ELIZA, a program so entertaining that it still attracts clients to its web site today. ELIZA is based on very simple pattern recognition, based on a stimulus-response model.

Learnable Programming Here's a trick question: How do we get people to understand programming? Khan Academy recently launched an online environment for learning to program. It offers a set of tutorials based on the JavaScript and Processing languages, and features a "live coding" environment, where the program's output updates as the programmer types. Are You Following a Bot? - Magazine Leo Espinosa One day last February, a Twitter user in California named Billy received a tweet from @JamesMTitus, identified in his profile as a “24 year old dude” from Christchurch, New Zealand, who had the avatar of a tabby cat. “If you could bring one character to life from your favorite book, who would it be?,” @JamesMTitus asked. Billy tweeted back, “Jesus,” to which @JamesMTitus replied: “honestly?

Microsoft is using Minecraft to train AI and soon, you can too When Microsoft acquired Mojang in 2014 for $2.5 billion, the idea was for the tech giant to break into mobile gaming with the developer’s massively popular title, Minecraft. Now, researchers at Microsoft are using a new platform called AIX to train an artificial intelligence agent to learn how to climb a hill in the open-world game. The goal is to teach what’s called ‘general intelligence’, the ability to learn lessons from one’s environment and make decisions. Danc's Miraculously Flexible Game Prototyping Tiles RPGs love PlanetCute So do platformers... One of the commenters on the SpaceCute posts wondered what would happen if you visited one of those delightful spa-like planetoids that decorate our little galaxy of cuteness. Well, now you know.

'Socialbots' steal 250GB of user data in Facebook invasion Programs designed to resemble humans infiltrated Facebook recently and made off with 250 gigabytes of personal information belonging to thousands of the social network's users, researchers said in an academic paper released today. The eight-week study was designed to evaluate how vulnerable online social networks are to large-scale infiltrations by programs designed to mimic real users, researchers from the University of British Columbia Vancouver said in the paper (PDF), titled "The Socialbot Network: When bots socialize for fame and money." The 102 "socialbots" researchers released onto the social network included a name and profile picture of a fictitious Facebook user and were capable of posting messages and sending friend requests. They then used these bots to send friend requests to 5,053 randomly selected Facebook users. Each account was limited to sending 25 requests per day to prevent triggering anti-fraud measures.