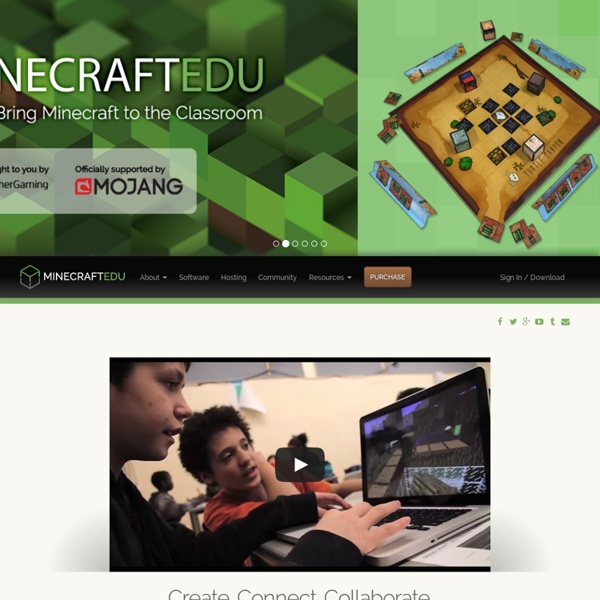 Why Minecraft? Every day, more and more teachers are using the world-building game Minecraft to engage and educate. The game is a true phenomenon and gamers young and old are using it in countless creative ways. Practitioners of Games Based Education have realized the potential and have embraced Minecraft in classrooms around the world. Now you can too! What is MinecraftEdu?

Minecraft in the Classroom Teaches Reading and More Last month, Scientific American declared, "... not only is Minecraft immersive and creative, but it is an excellent platform for making almost any subject area more engaging.” That’s a nod from a top science magazine to the game many parents wish their kids had never heard of. This endorsement follows Common Sense Media's seal of approval. On the surface, it's not so surprising. Something like 80 percent of 5- to 8-year-olds play games, and 97 percent of teens.

The Minecraft Teacher Back to school. Long time no post. So one day I had this idea to use Minecraft in my class. New Maker Tool Lets Students Build Apps and Games from Tablets Maker Movement | News New Maker Tool Lets Students Build Apps and Games from Tablets A new app from maker movement startup Tynker lets students build custom apps, like games and interactive stories, directly from tablets like iPads. Using the platform, students start with a general template--like a puzzle or storyboard--and drag-and-drop visual programming blocks to input simple commands based on step-by-step prompts, which in turn build the student’s app. Minecraft is not just fun — it's changing education Many people believe video games are intellectually lazy and have a poor effect on students. There are, however, a growing number of teachers, students, and parents who are using one video game in particular as an educational tool. Minecraft is a video game that has gained an enormous following. According to Minecraft.net, more than 20 million people have purchased a version of the game. Zack Klein, CEO of DIY.org and co-founder of Vimeo described Minecraft in terms of another popular childhood toy — Lego.

Games in Education - Science Skip to main content Get your Wikispaces Classroom now: the easiest way to manage your class. guest Minecraft homeschool: Incredible educational Minecraft inspiration from all over - Mankato Homeschooling Do your kids love Minecraft? Why not take advantage of that and use Minecraft to help teach history, science, language arts and more? There are dozens of wonderful sites on the internet designed to help parents and teachers use Minecraft to teach kids. Here's some of the best. Pixel Press Floors - Pixel Press > Pixel Press Floors app – You’ll need an iPad to “Create-from-Paper” and play – and you can create directly in the app just like you would on paper using touch or a stylus with our “Draw-In-App” tools. > Paper, Pencil & our Sketch Guide (optional) – Print the free Sketch Guide at home (visit projectpixelpress.com to download the PDF) and take a picture of what you create with your iPad’s camera. The glyphs you draw (for example an “x” is a spike and a “+” is a coin) are transformed into gameplay objects. From there you can apply a design to the element, test it, and play it. It’s that simple, and once you learn the glyphs, you’ll be creating like a pro.

XtraMath Helps Teachers Help Students Learn Math in ASL XtraMath is a free service designed to help teachers and parents help their students learn basic mathematics skills. The service provides an online environment in which students complete practice activities that are recorded and shared with their teachers and parents. The lessons provided by XtraMath come in video format. Recently, XtraMath added support for ASL. This is in addition to the six other languages previously supported by XtraMath. Learn more about XtraMath in the videos below.

The game played by over 30 million people worldwide gets the classrooms. This is a version of Minecraft to be used for educational purposes. Even though most of the features of the original game have been kept, this version has a more classroom-appropriate environment. The teachers can monitor students’ activity in this version of the game. There are lesson plans available for teachers to apply in their classrooms. Teachers can design lessons for their students to develop critical-thinking, problem-solving, collaborative and cooperative learning. Teaching Tips 1. Children can design cities and report the process of construction. 2. Children can construct versions of ancient monuments after reading the characteristics of these buildings. 3. Children can participate in a collaborative scavenger hunt where the teacher hides a treasure and students can follow clues to find it. by gabrielapearltrees Oct 26