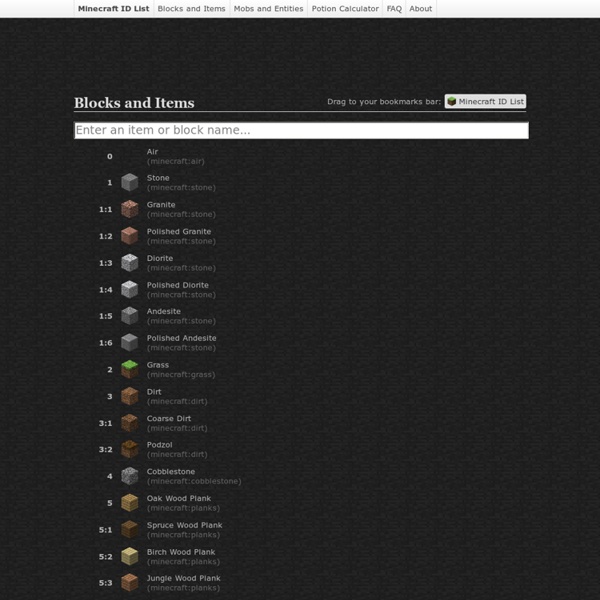 WorldEdit/Selection A fundamental part of WorldEdit is working with a selection or region. For example, if you wanted to replace all the glass blocks inside a square area with dirt, you would have to tell WorldEdit where this square is. WorldEdit gives you several ways to select a region for editing, this section will introduce you to selecting regions and show you what you can do with them. Selecting cuboids At the moment, WorldEdit allows you to select cuboids (think a 3D rectangle) by choosing two points at two corners of the cuboid.

Comics, Quizzes, and Stories - The Oatmeal Minecraft 1.4.5/1.4.6 - MCpatcher 2.4.4_01 - Minecraft - Polska Ocena użytkowników: MCpatcher - 1.7.2/4-1.7.10-1.8 tekstury w HD. Wraz z nową wersją Minecraft każdy kto chce mieć tekstury wyższe niż 16×16 pixeli musi użyć tego progamu. server.properties A server.properties file opened with Notepad++ server.properties is the file which stores all the settings for a multiplayer (Minecraft or Minecraft Classic) server. If you are going to edit server.properties it is important that you use the same structure as the original uses, although the order of the lines is arbitrary. The text before the equal sign is the key, which you shouldn't change. The text after the equal sign is the property's value, which you can edit. Lines that begin with # are comments - altering or removing these lines has no effect on the game.

Minecraft : Actualité Minecraft, aide et astuces avec FR-Minecraft.net 0.0] The Clay Soldiers Mod V4 This thread is discontinued. For Mincraft 1.1 and later, go to this thread. I have given Infiniti324 permission to post a topic for the 1.1 version of this mod on Planet Minecraft. If you want to check out my new mod, go here. Small enough to hold in your hand, strong enough to rule the land! Clay Soldier Mod V4 by KodaichiZeroSpecial thanks to VikomMedia for helping me a lot with preparing for the release of 3.5 and 3.6, mDiyo and SmallDeadGuy for helping me test V4 Minecraft Sharing the best Minecraft Seeds This seed, discovered by PixieStix on the Minecraft forums, generates a large island with plenty of resources, mobs and cave systems. Minecraft Seed: 6882480960540749692 Minecraft Wiki - The ultimate resource for all things Minecraft

[V1.2.5] Risugami's Mods - Everything Updated. Everything updated for 1.6.2. The mods directory will now be located in the same directory as minecraft jar, unless the default game directory is changed, where it will act like it had on older versions. Read this entire post. All of it. Downloading the mods means you agree to the disclaimer. CommandBook/Commands Commands General Teleportation Tip: In the latest developer versions of CommandBook player's minecarts & horses will be teleported with them if they have the permission commandbook.teleport.vehicle.*