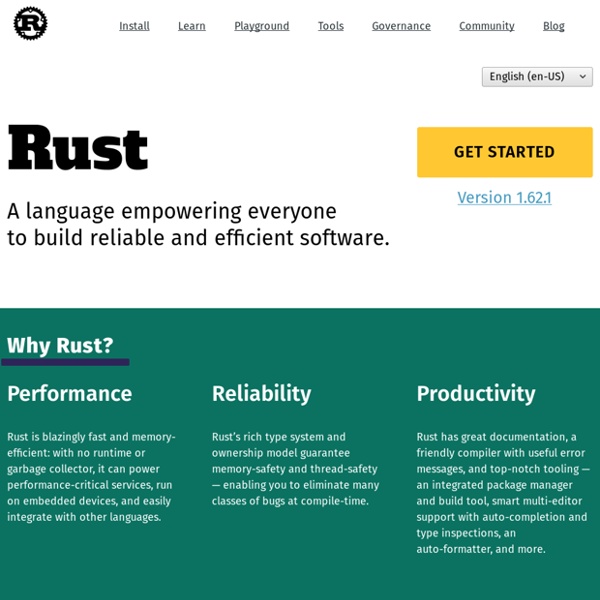 ometa/ OMeta is a new object-oriented language for pattern matching. It is based on a variant of Parsing Expression Grammars (PEGs) which we have extended to handle arbitrary data types. OMeta's general-purpose pattern matching facilities provide a natural and convenient way for programmers to implement tokenizers, parsers, visitors, and tree transformers, all of which can be extended in interesting ways using familiar object-oriented mechanisms. I am about to release a new version of OMeta/Squeak. Read all about it (and download the release candidate) here.

balenaEtcher - Flash OS images to SD cards & USB drives Ubuntu images (and potentially some other related GNU/Linux distributions) have a peculiar format that allows the image to boot without any further modification from both CDs and USB drives. A consequence of this enhancement is that some programs, like parted get confused about the drive's format and partition table, printing warnings such as: /dev/xxx contains GPT signatures, indicating that it has a GPT table. However, it does not have a valid fake msdos partition table, as it should. Perhaps it was corrupted -- possibly by a program that doesn't understand GPT partition tables.

RSS Feed Tutorial - Rainmeter One of the most common uses of the WebParser measure in Rainmeter is to create a skin to parse and display information from an RSS or Atom feed. This guide is not intended as a general purpose tutorial for the WebParser measure, nor does it attempt to explore all that regular expressions can do. A great deal of additional help is available at Regular Expression Options. RSS and Atom feeds follow certain patterns that make them fairly easy to parse. While there are differences between the RSS and Atom standards, which we will touch on a bit later, let's use a simple RSS output to outline how they are laid out. As you can see, the pattern is that there is a header section which contains "tags" for the title, description, link and lastBuildDate of the overall feed.

What is Rust and why is it so popular? Rust has been Stack Overflow’s most loved language for four years in a row, indicating that many of those who have had the opportunity to use Rust have fallen in love with it. However, the roughly 97% of survey respondents who haven’t used Rust may wonder, “What’s the deal with Rust?” The short answer is that Rust solves pain points present in many other languages, providing a solid step forward with a limited number of downsides. Lua Implementations LuaDirectory > LuaAddons > LuaImplementations There are quite a few reimplementations of Lua. The simplicity of Lua is a factor in this. Reimplementations of Lua compilers and interpreters: (sorted by target/host platform) ANSI C / Lua Bytecodes [Lua] (5.1) - Compiles Lua source to standard Lua bytecodes. Lua VM interprets Lua bytecodes.

Microcontroller - Embedded Software Solutions J-Link EDU is available for 49.98 € including 19% VAT (list price) In case you would like to purchase J-Link EDU from Europe, please contact the appropriate distributor in your country or the online shop at AK-Modul-Bus. For purchase from countries outside Europe, J-Link EDU is sold via distribution or at the Digi-Key website. U.S. customers, please check out our website shop-us.segger.com

Using journalctl - The Ultimate Guide To Logging Journalctl is a utility for querying and displaying logs from journald, systemd’s logging service. Since journald stores log data in a binary format instead of a plaintext format, journalctl is the standard way of reading log messages processed by journald. In the following paragraphs, we’ll show you several ways of using journalctl to retrieve, format, and analyze your logs. RSS Reading In Kotlin: Easy Android Programming Prologue RSS reading is one of the most important and widely used features across software apps in web or mobile techs. To keep the things in control we would be concentrating our blog to kotlin. To start with I would like to emphasize on a saying You can’t build a great building on a weak foundation

How to Get Started With Rust on Raspberry Pi If you are interested in programming, you’ve probably heard of Rust. The language, designed by Mozilla, is widely loved by developers and continues to grow in devotees. The Raspberry Pi is the swiss army knife of small computers, and it’s perfect for learning code. Python - Reading RSS feed RSS (Rich Site Summary) is a format for delivering regularly changing web content. Many news-related sites, weblogs and other online publishers syndicate their content as an RSS Feed to whoever wants it. In python we take help of the below package to read and process these feeds. pip install feedparser Feed Structure In the below example we get the structure of the feed so that we can analyse further about which parts of the feed we want to process.