Hoogle. Hoogle is a Haskell API search engine, which allows you to search many standard Haskell libraries by either function name, or by approximate type signature. 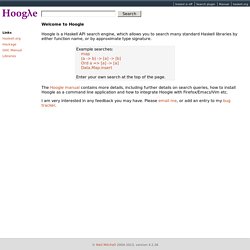 Example searches: map (a -> b) -> [a] -> [b] Ord a => [a] -> [a] Data.Map.insert Enter your own search at the top of the page. The Hoogle manual contains more details, including further details on search queries, how to install Hoogle as a command line application and how to integrate Hoogle with Firefox/Emacs/Vim etc. I am very interested in any feedback you may have. Please email me, or add an entry to my bug tracker. Debugging - HaskellWiki. 1 Stack trace. 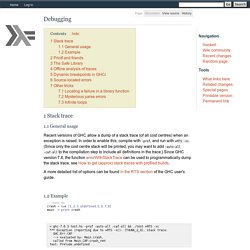 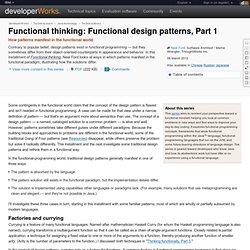 A case can be made for that view under a narrow definition of pattern — but that's an argument more about semantics than use. The concept of a design pattern — a named, cataloged solution to a common problem — is alive and well. However, patterns sometimes take different guises under different paradigms. Because the building blocks and approaches to problems are different in the functional world, some of the traditional Gang of Four patterns (see Resources) disappear, while others preserve the problem but solve it radically differently. This installment and the next investigate some traditional design patterns and rethink them in a functional way. In the functional-programming world, traditional design patterns generally manifest in one of three ways: Factories and currying. 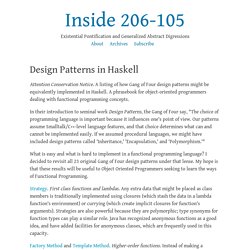 A listing of how Gang of Four design patterns might be equivalently implemented in Haskell. A phrasebook for object-oriented programmers dealing with functional programming concepts. In their introduction to seminal work Design Patterns, the Gang of Four say, "The choice of programming language is important because it influences one's point of view. Our patterns assume Smalltalk/C++-level language features, and that choice determines what can and cannot be implemented easily. If we assumed procedural languages, we might have included design patterns called 'Inheritance,' 'Encapsulation,' and 'Polymorphism.'" What is easy and what is hard to implement in a functional programming language? 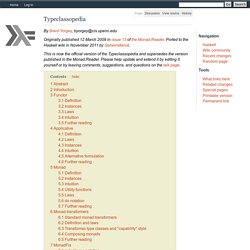 Ported to the Haskell wiki in November 2011 by Geheimdienst. This is now the official version of the Typeclassopedia and supersedes the version published in the Monad.Reader. Please help update and extend it by editing it yourself or by leaving comments, suggestions, and questions on the talk page. What I Wish I Knew When Learning Haskell 2.2 ( Stephen Diehl )

Stephen Diehl (@smdiehl ) The source for all code is available here. 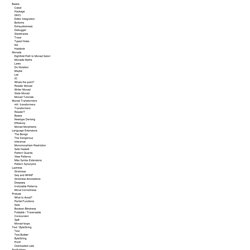 What is the best functional programming language for data science? Haskell Hierarchical Libraries. Applications and libraries - HaskellWiki. Haskell Language. The Haskell Sequence. Haskell Communities and Activities Report - HaskellWiki. The Haskell Communities and Activities Report was initiated at the 2001 Haskell workshop, as a status report of the Haskell community as a whole, to be updated twice a year. 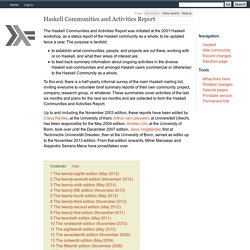 The purpose is twofold: to establish what communities, people, and projects are out there, working with or on Haskell, and what their areas of interest are; to feed back summary information about ongoing activities in the diverse Haskell sub-communities and amongst Haskell users (commercial or otherwise) to the Haskell Community as a whole. To this end, there is a half-yearly informal survey of the main Haskell mailing list, inviting everyone to volunteer brief summary reports of their own community, project, company, research group, or whatever. These summaries cover activities of the last six months and plans for the next six months and are collected to form the Haskell Communities and Activities Report. 1 The twenty-eighth edition (May 2015) ... is available as PDF and HTML. ... is available as PDF and HTML.

Functional programming - Getting started with Haskell. A Little Lens Starter Tutorial. Lens is a package which provides the type synonym Lens which is one of a few implementations of the concept of lenses, or functional references. lens also provides a number of generalizations of lenses including Prisms, Traversals, Isos, and Folds. 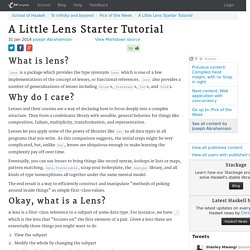 Lenses and their cousins are a way of declaring how to focus deeply into a complex structure. They form a combinator library with sensible, general behavior for things like composition, failure, multiplicity, transformation, and representation. Lenses let you apply some of the power of libraries like hxt to all data types in all programs that you write. As this comparison suggests, the initial steps might be very complicated, but, unlike hxt, lenses are ubiquitous enough to make learning the complexity pay off over time. The end result is a way to efficiently construct and manipulate "methods of poking around inside things" as simple first-class values. Wadler: Monads. Philip Wadler The arrow calculus Sam Lindley, Philip Wadler, and Jeremy Yalloop, Journal of Functional Programming 20(1):51&em;69, 2010. 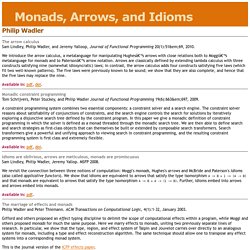 We introduce the arrow calculus, a metalanguage for manipulating Hughesâ€™s arrows with close relations both to Moggiâ€™s metalanguage for monads and to Patersonâ€™s arrow notation. Arrows are classically defined by extending lambda calculus with three constructs satisfying nine (somewhat idiosyncratic) laws; in contrast, the arrow calculus adds four constructs satisfying five laws (which fit two well-known patterns). The five laws were previously known to be sound; we show that they are also complete, and hence that the five laws may replace the nine. Haskell web programming. Update: updated for Yesod 1.2 tl;dr: A simple Yesod tutorial. 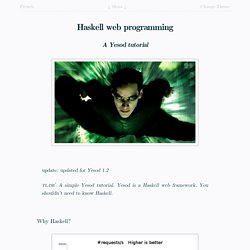 Yesod is a Haskell web framework. You shouldn’t need to know Haskell. Why Haskell? Its efficiency (see Snap Benchmark & Warp Benchmark). Haskell is a high level language that makes it harder to shoot yourself in the foot than C, C++ or Java, for example. “If your program compiles it will be very close to what the programmer intended”. Haskell web frameworks handle parallel tasks perfectly—even better than node.js, for example. Welcome to FP Haskell Center. "Controlling Time and Space: understanding the many formulations of FRP" by Evan Czaplicki. Ryantrinkle/try-reflex. Reflex ImpressJs Example. Adventure with Types in Haskell - Simon Peyton Jones (Lecture 1) Design Patterns in Haskell. Haskell Language.

Tfp2013-hlearn-a-machine-learning-library-for-haskell.pdf. Haskell Hierarchical Libraries. Hoogle. Functional thinking: Functional design patterns, Part 1. Hodgp.pdf. Programming Languages Weblog. Fhpc12.pdf. Daily Haskell Exercise. Problem Consider we have a complete directed acyclic graph of vertices, such that the topological sort order is . There is a weight function , such that it has the Monge property, i.e. holds for all . The weight of a path is the sum of the weight of all edges in the path. We want to find a path of length from to , such that the weight is minimized. The function would have the signature minWeightKLinkedPath :: (Integral a, Num b)=>a->a->(a->a->b)->[a].

Solve the problem in time. Hint There is an algorithm to solve it in time on stackoverflow, which can be modified to run in time. Apply the technique in the talk Revisiting The Monge Property. Extensions We can actually implement the most general form of the problem in Revisiting The Monge Property, and also reduce the memory usage from to . Applications Consider the linear partition problem that got featured on hacker news. Noelmarkham/learn-you-a-haskell-exercises. Functional programming - Getting started with Haskell.