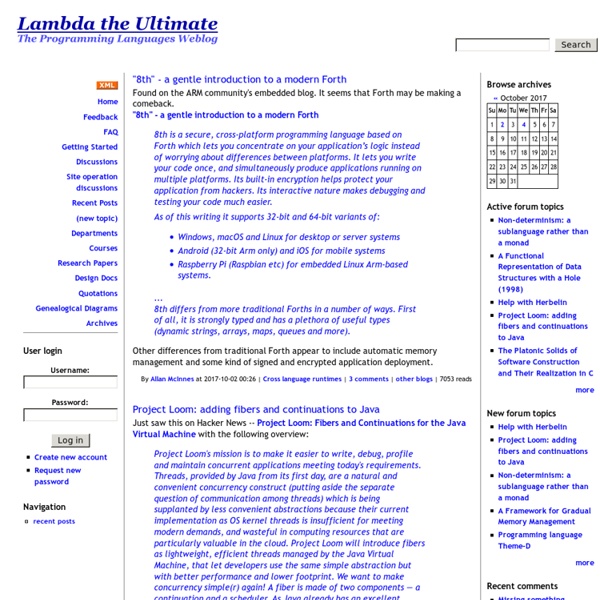 It is not generally proper to post call-for-papers on LtU. Exceptions have been made, for broad workshops likely to appeal to many LtU readers. I hope the 2014 ML Family workshop also qualifies. The ML Family workshop intends to attract the entire family of ML languages, whether related by blood to the original ML or not. Our slogan is ``Higher-order, Typed, Inferred, Strict''. Designers and users of the languages fitting the description have many issues in common, from data representation and garbage collection to fancy type system features.

Daily Haskell Exercise Problem Consider we have a complete directed acyclic graph of vertices, such that the topological sort order is . There is a weight function , such that it has the Monge property, i.e. holds for all . The weight of a path is the sum of the weight of all edges in the path.

New Ways to Discover and Use Alexa Skills Introducing New Features That Make It Easier for Customers to Discover and Use Your Alexa Skills Alexa, Amazon’s cloud-based voice service, powers voice experiences on millions of devices, including Amazon Echo and Echo Dot, Amazon Tap, Amazon Fire TV devices, and devices like Triby that use the Alexa Voice Service. One year ago, Amazon opened up Alexa to developers, enabling you to build Alexa skills with the Alexa Skills Kit and integrate Alexa into your own products with the Alexa Voice Service. Today, tens of thousands of developers are building skills for Alexa, and there are over 1,400 skills for Alexa – including Lyft and Honeywell, which were added today. A New Experience for Discovering Skills

Introduction to Goose Game The first mention of the Game of the Goose comes from Francesco dei Medici, Grand Duke of Florence in Italy from 1574 to 1587. He sent a copy to King Philip II of Spain where it caused great excitement at the court, and the game spread rapidly to other parts of Europe. Professor Murray reports in his book: "A History of Board Games other than Chess" (Oxford University Press, 1952) that it reached England by 1597, when John Wolfe entered "the newe and most pleasant game of the Goose" in the Stationers' Register on June 16 (Arber, iii, 21). In 1758 the Duchess of Norfolk planted a Game of Goose in hornbeam at Worksop, as mentioned by Horace Walpole (Letters, 1840, iii, 395). Haskell web programming update: updated for Yesod 1.2 tl;dr: A simple Yesod tutorial. Yesod is a Haskell web framework. You shouldn’t need to know Haskell. Why Haskell?

Writing Unit tests for C/C++ with the Microsoft Unit Testing Framework for C++ In Visual Studio, you can create unit tests for unmanaged code written in C++. Unmanaged code is sometimes referred to as native code. The following procedure contains the essential information that will get you started. Play board games online! Dear all, As you know, for two years and a half, we have been giving without counting to allow you to discover the best board games online. Our goal when we started this website was to create the best board gaming website online. With 32 games online (and a lot more to come) and 500 to 600 players online every evening, BGA is not very far of getting to be the most popular website of its category, and we feel like we completed our mission. Since two years and a half, we have had to battle with our families, our friends, our jobs and our social life overall to find the time needed for this adventure. We managed to do it thanks to our passion and our willingness to never stay put and to always go forward through innovation: the collaborative translation system, BGA Studio or the new lobby are the fruits from this state of mind.

Wadler: Monads Philip Wadler The arrow calculus Sam Lindley, Philip Wadler, and Jeremy Yalloop, Journal of Functional Programming 20(1):51&em;69, 2010. We introduce the arrow calculus, a metalanguage for manipulating Hughesâ€™s arrows with close relations both to Moggiâ€™s metalanguage for monads and to Patersonâ€™s arrow notation. Arrows are classically defined by extending lambda calculus with three constructs satisfying nine (somewhat idiosyncratic) laws; in contrast, the arrow calculus adds four constructs satisfying five laws (which fit two well-known patterns). REST API Design - Resource Modeling “The key abstraction of information in REST is a resource. Any information that can be named can be a resource: a document or image, a temporal service (e.g. "today's weather in Los Angeles"), a collection of other resources, a non-virtual object (e.g. a person), and so on.

LyX’s detailed Math manual by the LyX Team Version 2.0.x This document explains LyX’s math features and is furthermore a collection of LaTeX-commands used for mathematical characters and constructs. The explanations are designed for the usage of commands. It is therefore required that you have read the section Mathematical Formulas of the User’s Guide. Most of the characters and many constructs explained in this manual are also accessible via the menu Insert ▷ Math, or the math toolbar.

A Little Lens Starter Tutorial lens is a package which provides the type synonym Lens which is one of a few implementations of the concept of lenses, or functional references. lens also provides a number of generalizations of lenses including Prisms, Traversals, Isos, and Folds. Lenses and their cousins are a way of declaring how to focus deeply into a complex structure. They form a combinator library with sensible, general behavior for things like composition, failure, multiplicity, transformation, and representation. Lenses let you apply some of the power of libraries like hxt to all data types in all programs that you write.