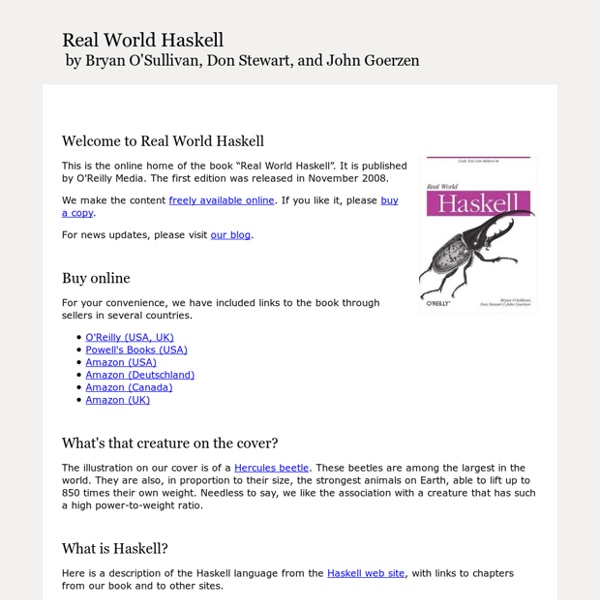 Welcome to Real World Haskell This is the online home of the book “Real World Haskell”. It is published by O'Reilly Media. The first edition was released in November 2008. We make the content freely available online. If you like it, please buy a copy.

Debugging - HaskellWiki 1 Stack trace 1.1 General usage Recent versions of GHC allow a dump of a stack trace (of all cost centres) when an exception is raised. DOAB: Directory of Open Access Books Abstract Increasingly, technology is at stake in toys, games and playing. With the immense popularity of computer games, questions concerning the role and function of technology in play have become more pressing.

Forgotten Books The Journal of Horticulture, Cottage Gardener, and Countr…A Journal of Horticulture, Rural and Domestic Economy, Botany and Natural Hi… by George W. JohnsonVol. 3 We know of one who would not have on the parlour chimney-shelf a dial with a seconds hand, because it made him see and feel how life lessens, as it were, drop by drop. What he would h… Door KnockersThe Famous Wm, Hall & Co, Line, Collected Since 1843; Now Made By Art Bras… Design Patterns in Haskell Attention Conservation Notice. A listing of how Gang of Four design patterns might be equivalently implemented in Haskell. A phrasebook for object-oriented programmers dealing with functional programming concepts. In their introduction to seminal work Design Patterns, the Gang of Four say, "The choice of programming language is important because it influences one's point of view.

Typeclassopedia - HaskellWiki By Brent Yorgey, byorgey@cis.upenn.edu Originally published 12 March 2009 in issue 13 of the Monad.Reader. Ported to the Haskell wiki in November 2011 by Geheimdienst. What I Wish I Knew When Learning Haskell 2.2 ( Stephen Diehl ) Stephen Diehl (@smdiehl ) The source for all code is available here. If there are any errors or you think of a more illustrative example feel free to submit a pull request on Github. Hoogle Hoogle is a Haskell API search engine, which allows you to search many standard Haskell libraries by either function name, or by approximate type signature. Example searches: map (a -> b) -> [a] -> [b] Ord a => [a] -> [a] Data.Map.insert Enter your own search at the top of the page. The Hoogle manual contains more details, including further details on search queries, how to install Hoogle as a command line application and how to integrate Hoogle with Firefox/Emacs/Vim etc. I am very interested in any feedback you may have. Please email me, or add an entry to my bug tracker.

Applications and libraries - HaskellWiki The number of Haskell packages is growing rapidly. The section 'Haskell library collections' gives an ordering of all these packages by relative importance. In the section 'Haskell applications and libraries' an ordering by category is given. Haskell Communities and Activities Report - HaskellWiki The Haskell Communities and Activities Report was initiated at the 2001 Haskell workshop, as a status report of the Haskell community as a whole, to be updated twice a year. The purpose is twofold: to establish what communities, people, and projects are out there, working with or on Haskell, and what their areas of interest are; to feed back summary information about ongoing activities in the diverse Haskell sub-communities and amongst Haskell users (commercial or otherwise) to the Haskell Community as a whole. To this end, there is a half-yearly informal survey of the main Haskell mailing list, inviting everyone to volunteer brief summary reports of their own community, project, company, research group, or whatever. These summaries cover activities of the last six months and plans for the next six months and are collected to form the Haskell Communities and Activities Report.